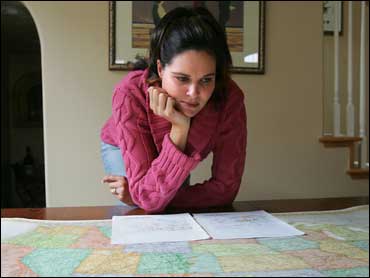 One woman's Social Security identification number has been used by at least 81 people in 17 states. Though impossible to verify in every case, information gleaned from criminal investigations, tax documents and other sources suggest most of the users were probably illegal immigrants trying to get work.

Audra Schmierer, a 33-year-old housewife in this affluent San Francisco suburb, realized she had a problem in February 2005, when she got a statement from the IRS saying she owed $15,813 in back taxes — even though she had not worked since her son was born in 2000. Perhaps even more surprising, the taxes were due from jobs in Texas.

Schmierer has since found that her Social Security number has been used by people from Florida to Washington state, at construction sites, fast-food restaurants and even major high-tech companies. Some opened bank accounts using the number.

The federal government took years to discover the number was being used illegally, but authorities took little action even then.

"They knew what was happening but wouldn't do anything," said Schmierer. "One name, one number, why can't they just match it up?"

Her case is an example of an increasingly common problem: Many thieves are able to steal personal information because employers do not have to verify Social Security numbers or other documents submitted by job seekers.

The situation has long drawn fire from anti-illegal immigration groups, but Congress has only recently moved to fix it. Both the Senate and House of Representatives have passed immigration-reform bills that call for employers to verify Social Security numbers in a national database.

Homeland Security officials have taken it a step further, calling on Congress to allow the Social Security Administration to share information with immigration-enforcement agents at work sites.

The IRS can fine employers $50 for each inaccurate number filed, a punishment that companies often dismiss as just another cost of doing business.

"Sending letters is the limit to what can be done," Social Security spokesman Lowell Kepke said. "We expect that will be able to fix any records that are incorrect."

The information on mismatched names is seldom shared with law enforcement agencies.

When Schmierer called the IRS, she learned that numerous people were using her Social Security number. Officials said the erroneous balances would be eliminated, but the agency would have to correct the problem again in future years.

"They told me they couldn't do anything else," Schmierer said.

Schmierer has done a little investigating of her own, combing through tax bills sent to her for names and locations of employers who hired people using her number.

She has also obtained more than 200 W-2 and 1099 tax forms that contained her Social Security number but different names. Schmierer provided copies of the records to The Associated Press.

Most of the people who used her identification number worked multiple jobs in the same year, though some remained at the same company for several years. The top wage earner made $39,465, but most reported income of less than $15,000.

Schmierer filed a police report after learning one man had used her information in 2003 at janitorial and landscaping companies near Haltom City, Texas.

Investigators found the man, who told officers he had bought a fake Social Security card at a flea market, according to a police report. He was not arrested.

Schmierer tracked down other people, finding that her number had been used to get work but not to access her credit card or bank accounts.

What started as a hassle turned into a major headache earlier this year when she sought work through a temporary agency that learned her Social Security number had been used by a woman in Texas two years earlier. The agency could not hire Schmierer for more than a month while the situation was clarified.

"How do you prove that you are you?" Schmierer said. "It's like you are guilty until proven innocent."

While returning from a trip to Mexico with her husband last year, Schmierer was detained for four hours in a Dallas airport by immigration officials. The reason: a woman using her Social Security number was wanted for a felony.

Schmierer never determined how her number became so widely used. Sellers of fake documents often make up numbers and use them repeatedly.

Schmierer's number became so compromised that Social Security officials finally took a rare step used only in extreme cases: They gave her a new one.

Schmierer hopes that will end her frustrations, but she suspects her old number will continue to be misused.

"It's clear to me that because my number has been used for so long, it's not going to stop," she said.