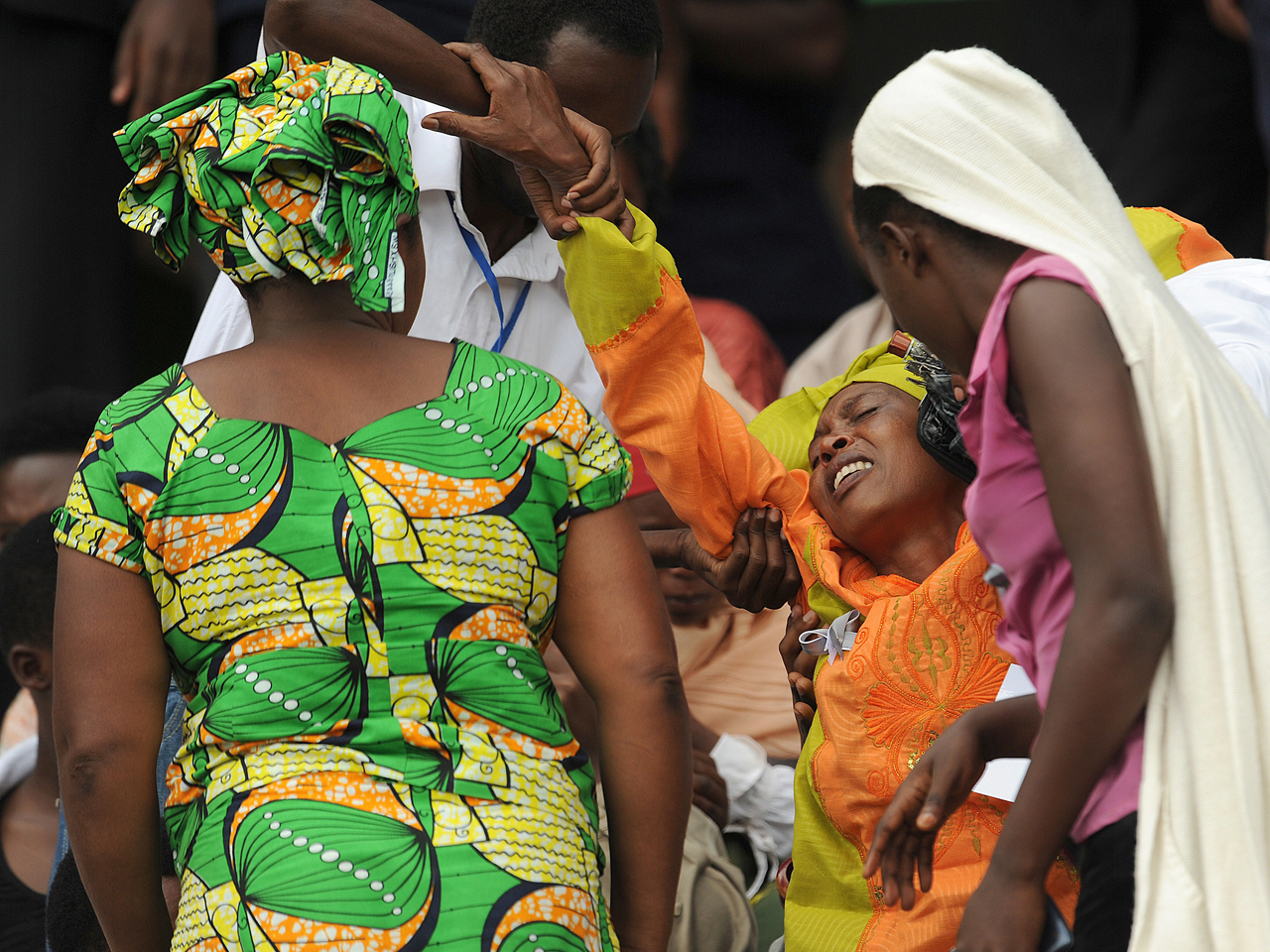 KIGALI, Rwanda - Sorrowful wails and uncontrollable sobs resounded Monday as thousands of Rwandans packed the country's main sports stadium to mark the 20th anniversary of the beginning of a devastating 100-day genocide.

President Paul Kagame and U.N. Secretary-General Ban Ki-moon together lit a flame at the Kigali Genocide Memorial Centre, which estimates that 1,000,050 Rwandan perished in three months of machete and gunfire attacks mostly aimed at the country's minority Tutsi population by extremist Hutus.

"Twenty years ago today our country fell into deep ditches of darkness," said Rwanda's minister of foreign affairs, Louise Mushikiwabo. "Twenty years later, today, we are a country united and a nation elevated."

In the aftermath of the genocide, Rwandans felt alone, she said. But now friends around the world have joined "to commemorate the rebirth of our nation," she said.

Representatives from France, however, were absent after a spat with Kagame that began with him accusing the country of participating in the execution of parts of the genocide violence. In an apparent jab at Paris, Mushikiwabo welcomed French citizens to Monday's stadium ceremony.

Ever since the massive killing spree, the world community has been forced to acknowledge that it stood by and did nothing. The U.N. chief told a news conference he hopes to reaffirm the international community's commitment to the idea of "never again," though he said there are genocide symptoms elsewhere. Many experts say neighboring Central African Republic is at risk, Syria as well.

The-President Bill Clinton has said he regrets not doing more to prevent the slaughter in Rwanda and that "it had an enduring impact on me."

In a speech Clinton gave during a visit to Kigali in 1998, he said: "The international community, together with nations in Africa, must bear its share of responsibility for this tragedy, as well. We did not act quickly enough after the killing began. We should not have allowed the refugee camps to become safe haven for the killers. We did not immediately call these crimes by their rightful name: genocide. We cannot change the past. But we can and must do everything in our power to help you build a future without fear, and full of hope."

Many have blamed U.S. reluctance to act in Rwanda on the infamous "Black Hawk Down" incident in Somalia just a year earlier, which made the American public and therefore its politicians reluctant to involve itself in another African conflict.

The U.S. ambassador to the United Nations, Samantha Power, who attended Monday's ceremony, said the genocide was a "devastating reminder that nightmares seemingly beyond imagination can in fact take place."

As a survivor recounted his tale of violence, it triggered emotional reactions that required some mourners to be assisted by psychological counselors who were on standby. Bloodcurdling screams recalling the horror of seeing whole families slaughtered rang out from the crowd.

The violence Rwanda saw is nearly unimaginable. Hutu attackers burned down churches with hundreds or thousands of Tutsis inside. Machete-wielding attackers entered homes and slaughtered children and grandparents. Mr. Clinton, in his 1998 speech, said: "Scholars of these sorts of events say that the killers, armed mostly with machetes and clubs, nonetheless did their work five times as fast as the mechanized gas chambers used by the Nazis."

In Rwanda, a green and hilly and tranquil looking land, genocide survivor Immaculee Illibagiza told "60 Minutes" in a 2006 interview she saw something in the distance in 1994 and realized life would never be the same.

"I remember looking up to the hill across the river. And I saw somebody actually with a machete cutting somebody. And we were all like, 'Wow! Something's happening here. They're going to kill us,'" she remembers. "A person like when they're cutting, cutting. And somebody was screaming."

People were screaming all over the country. The genocide had begun. It was extremely low tech - no gas chambers here - just machetes, spears and knives, wielded by Hutus, the majority tribe as they tried to wipe out the minority Tutsis.

Hundreds of mass graves were dug across the country to bury the victims of what the government says was a long-planned killing spree that ignited after the plane of then-President Juvenal Habyarimana, a Hutu, was shot down.

Kagame has won praise for pulling his country out of the worst spasm of violence the world has seen in decades. His government has advanced women's rights, economic development and health care. But critics say that progress has been marred by the government's authoritarian grip on control that has seen many government critics and opposition members killed. Many Rwanda watchers have begun to call his 14-year reign a dictatorship.

Human Rights Watch, which Kigali practically views as an enemy organization, says civil and political rights in the country remain severely curtailed. It said the persistence of attacks on Rwandan government critics in exile "is striking."

"After the genocide Rwanda was really a destroyed country, destroyed society. There was this feeling of being hopeless to people," said the memorial's manager Honore Gatera, mentioning all the orphans the genocide created, and all the citizens with physical and psychological wounds.

However, he argued: "Rwandans got to know the dangers of humanity, meaning, in a positive way, now Rwanda knows how to educate ourselves, our children, our neighbors and our friends," he said.

Even as the three-month period of mourning began, a diplomatic spat between Rwanda and France escalated. Kagame in an interview with Jeune Afrique published Monday condemned France and Belgium for their actions surrounding the genocide, accusing both of having done too little to save lives. He also accused France of participating in the execution of parts of the genocide violence.

In response to the accusations, the Paris government said France's justice minister would not come to Kigali as planned. France's ambassador to Rwanda says he was then barred from the remembrance ceremonies.