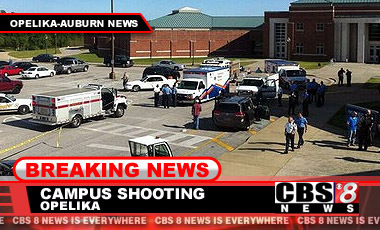 (CBS/AP) Opelika, Ala. - Officials say one person is dead and as many as three others are hurt in a shooting at Southern Union Community College in Opelika, Ala.

City spokeswoman Jan Gunter says it appears a domestic dispute led to the violence Wednesday afternoon at the campus in east Alabama.

Authorities are still sorting out details.

Witnesses report seeing a Toyota minivan with three windows shot out outside a building.

Gunter says police have suspect but it's unclear whether the man is in custody.

The school has closed campus for the rest of the day.