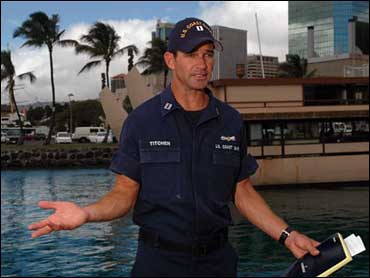 The mast on a whale-watching catamaran broke, killing a man and prompting the rescue of 50 people as the boat sank off the coast of Maui, authorities said.

A 48-year-old man died in the incident Sunday, authorities said. Two people were taken to a hospital; one was in stable condition Monday night, and the other was treated and released, said Maui County information officer Mahina Martin.

The Kiele V catamaran was nearly two miles off Maui when the mast broke, the Coast Guard said. Winds were about 20 mph.

The boat began sinking and many passengers were already in the water when other boats arrived, witnesses said.

Those other boats, the Coast Guard and firefighters helped take passengers and crew members to shore as the boat foundered.

The Kiele V captain and crew tried to cut away the rigging lines to free the sail, said Jason Moore, a magazine photographer aboard one of the other boats.

"The back side was being pulled down, and the captain only had a hacksaw to cut the rigging," Moore said.

The Coast Guard responded with a helicopter and rescue boats, authorities said.

Killed was Hal Pulfer, 48, of Highland Park, Ill., officials said. It was unclear how he died, but an autopsy was scheduled.

The Kiele V boat, owned by the Hyatt Regency Maui Resort and Spa, was used to take passengers to spot humpback whales at sunset.

"We are deeply saddened by this accident, and our concern is for those who have been affected by this tragic event," Hyatt said in a statement. "We are in direct contact with the Coast Guard and other authorities involved to understand how the accident happened."

The Coast Guard was searching for the sunken vessel and was investigating the accident, Martin said.

It was the second death aboard a Hawaii tour catamaran in less than four months. In December, a 13-year-old California boy was killed when a mast snapped in brisk winds, pinning him.