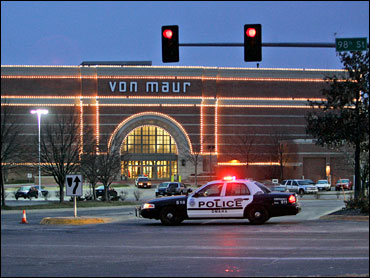 The teenager carried his rifle into the mall, passing shoppers and decorations.

A department store employee was pressing a suit for a customer. A woman was making a quick stop to buy Christmas presents before picking up her son from school. Christmas music played.

The gunman stopped on the third floor and cut through the sounds with gunfire. Shoppers and employees at the Westroads Mall scrambled for cover in dressing rooms, clothing racks, offices and storage areas.

Eight people were killed and five wounded before the shooter ended the horror by taking his own life. He left behind a note that read, in part, "Now I'll be famous."

The victims' names were given at a press conference Thursday by Omaha Police Chief Thomas Warren. The victims are aged 24 to 66, employees as well as customers, 5 females and four males deceased, including the suspect, Robert Hawkins.

Omaha mayor Mike Fahey offered his condolences to the families of the victims.

"There are no words to adequately express our feelings this morning," Fahey said.

"I saw employees taking a bunch of people into the dressing room, but I didn't want to go," shopper Jennifer Kramer told CBS' The Early Show. "I didn't know if this guy was going to come looking for people in dressing rooms, so we hid in a pants rack towards the back of the men's department."

Robert A. Hawkins, 19, had a criminal record and had been kicked out of his parents' house. Police have not said anything about the motive, but Hawkins had suffered a string of setbacks over the past year.

A family friend said he recently broke up with a girlfriend and got fired, and a source told CBS News affiliate KMTV-TVhe tried, but failed, to get into the Army.

Hawkins was kicked out by his family about a year ago. He moved in with a friend's family, and Debora Maruca-Kovac and her husband welcomed him into their home and tried to help him.

"He came to us like a little lost puppy. He was always very sensitive and caring, always wanting to know how everybody was doing," Maruca-Kovac told The Early Show. "He just needed a chance to get on his feet."

"We never saw violence in him," she said.

She told the Omaha World-Herald that the night before the shooting, Hawkins and her sons showed her an SKS semiautomatic Russian military rifle - the same type used in the shooting. She said she thought the gun belonged to a member of Hawkins' family. She said she didn't think much of it - the gun looked too old to work.

Records in Sarpy and Washington counties showed Hawkins had a felony drug conviction and several misdemeanor cases filed against him, including an arrest 11 days before the shooting for having alcohol as a minor. He was due in court in two weeks.

Maruca-Kovac said Hawkins was fired from his job at a McDonald's this week and had recently broken up with a girlfriend. She said he phoned her at about 1 p.m. Wednesday, telling her he had left a note. She tried to get him to explain.

"He said, 'It's too late,"' and hung up, she told CNN. She then called Hawkins' mother.

(CBS)
In the note, which was turned over to authorities, Hawkins wrote that he was "sorry for everything" and would not be a burden on his family anymore.

Maruca-Kovac went to her job as a nurse at the Nebraska Medical Center, where victims of the shooting soon began to arrive.

"I was fearful that he was going to try to commit suicide," she told The Early Show. "But I had no idea that he would involve so many other families."

"I feel so sorry for him, that he was so lost and alone that he had to resort to this."

The first 911 call came in at 1:42 p.m., and the shooting was already over when police arrived six minutes later, authorities said.

"We sent every available officer in the city of Omaha," Sgt. Teresa Negron said. "They came to the mall in lights and sirens."

The World-Herald reported that the gunman had a military-style haircut and a black backpack, and wore a camouflage vest.

Police Chief Warren said Hawkins "appeared to be concealing something balled up in hooded sweat shirt" on a surveillance video.

Hawkins opened fire in a Von Maur store, part of a Midwestern chain.

Mickey Vickory, who worked in the store's third-floor service department, said she heard shots and went with coworkers and customers into a back closet, emerging about a half-hour later when police shouted to come out with their hands up. As police led them to another part of the mall for safety, they saw the victims.

"We saw the bodies and we saw the blood," she said.

Keith Fidler, another Von Maur employee, said he heard a burst of five to six shots followed by 15 to 20 more rounds. Fidler said he huddled in the corner of the men's clothing department with about a dozen other employees until police yelled to get out of the store.

Witness Shawn Vidlak said the shots sounded like a nail gun. At first he thought it was noise from construction work at the mall.

"People started screaming about gunshots," Vidlak said. "I grabbed my wife and kids. We got out of there as fast as we could."

A Von Maur store executive told KMTV it has a policy in place for such emergencies and employees, within the past year, had gone through training on how to handle similar situations.

Nebraska Medical Center spokeswoman Andrea McMaster said the hospital had three victims from the mall shooting, including Fred Wilson, 61, who was in critical condition early Thursday with a bullet wound to his chest.

On Wednesday night, police used a bomb robot to access a Jeep Cherokee left in the mall parking lot that authorities believe belonged to Hawkins. Officers had seen some wires under some clothing, but no bomb was found.

President Bush was in Omaha on Wednesday for a fundraiser, but left about an hour before the shooting.

"Having just visited with so many members of the community in Omaha today, the president is confident that they will pull together to comfort one another," White House press secretary Dana Perino said.

Governor Dave Heineman has issued an order for all U.S. and state flags to be flown at half-staff effectivelt immediately in honor of those killed.

The flags will remain at half-staff until Sunday.

The sprawling, three-level mall has more than 135 stores and restaurants. It gets 14.5 million visitors every year, according to its Web site.

This was the second mass shooting at a mall this year. In February, nine people were shot, five of them fatally, at Trolley Square mall in Salt Lake City. The gunman, 18-year-old Sulejman Talovic, was shot and killed by police.