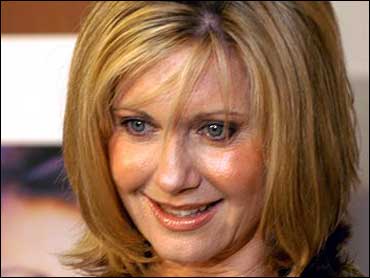 Olivia Newton-John has been entertaining audiences for more than 40 years. Along the way, she has collected four Grammy awards, 15 top 10 singles and starred in the most successful movie musical of all time, "Grease."

Now she's back in stores with perhaps her most personal album, "Grace & Gratitude."

"I made it for myself as a healing," Newton-John told The Early Show co-anchor Harry Smith. "I went through a difficult year and I wanted to create a piece of music that would be nice for me and also helpful. I wrote with a friend, Amy Sky, an amazing song writer from Canada. I've said I want it to be totally continuous, so you never have to be jolted awake. It's about relationships with self and others and your spiritual life, whatever that is."

The lyrics in "Grace & Gratitude" are deeply spiritual and include Tibetan chants, prayers from Judaism and Islam, and a poem from St. Francis of Assisi.

Her longtime boyfriend Patrick McDermott inexplicably disappeared in June 2005. Newton-John dated the then-48-year-old cameraman for nine years. He went missing the night before he was supposed to depart on a fishing trip off the coast of California.

"They have been a very difficult journey," Newton-John said. "But out of that, I have come up with something positive on making music. Music, I have discovered, is the core of who I am. I think I am best able to express myself in songs.

"I think I can say I expressed everything I felt on this CD. I feel so grateful for what I do have. And as much difficulty as you go through, if you can still acknowledge you have a lot. It actually makes you feel good. It's a medical fact that if you chose gratitude for something, no matter which faith you chose to do it in, it is healing for the body."

Newton-John, who survived breast cancer in 1992, is partnering with Walgreen's stores, where the CD will be sold exclusively. Part of the proceeds go to charity and to encourage women to be vigilant about checking their breasts for lumps. She is including a breast self-exam kit with the CD.

"Early detection is key," she said. "And if I hadn't found my lump early, I don't know what would have been. I am still here and I want to encourage women to do that on a regular basis."

In the kit is a simple device that Newton-John said works like a magnifying glass for fingers and makes it much easier to detect any changes in the breasts. Last month, Newton-John also unveiled her signature line of body, heart and spirit wellness products for women, sold only at Walgreen's stores.

After her struggle with cancer and the loss of her love, Newton-John has become respected and admired just as much for her courage as for her music.

"A lot of women come up to me and say it's helped them by coming up and talking about it, which is great," Newton-John said. "Really, the reason I have done it is because a woman encouraged me many years ago. The first years I have had cancer, a woman comes up to me and says, 'I had it 20 years ago and I am fine.' Just that moment was important to me."