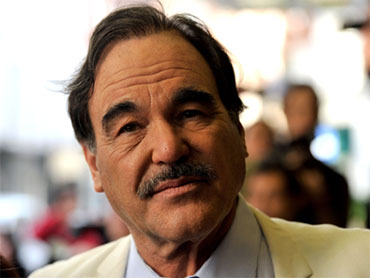 The Gulf of Mexico oil spill shows that the United States should follow the example of South American socialists in nationalizing its energy industry, filmmaker Oliver Stone said Tuesday.

The Academy Award-winning director of "Born on the Fourth of July" and "JFK" said that America's country's natural wealth was too important to be left in private hands, telling journalists in central London that oil and other natural resources "belong to the people."

"This BP oil spill is typical" of what happens when private industry is allowed to draw revenue on what should be a public good, Stone said.

"We shouldn't make this kind of profit on oil or on health or on war or on prisons. All these industries should be public industries."

Stone, 63, is in the British capital to promote his documentary, "South of the Border," which tells the story of firebrand Venezuelan President Hugo Chavez and his left-wing Latin American allies.

The 75-minute film is meant to draw attention to the social improvements ushered in by Chavez, who has nationalized vast swaths of Venezuela's economy, including important parts of the oil sector and big chunks of the banking, electric and steel industries. Bolivian leader Evo Morales, also interviewed by Stone for the documentary, has similarly expanded the state's control over the country's energy infrastructure.

Critics of the film accuse Stone of painting a fawning portrait of the Venezuelan leader, saying the documentary ignores Venezuela's opposition - which human rights groups say is being squeezed by Chavez's increasingly authoritarian leadership and a crackdown on private media.

The director occasionally wandered off-topic during the press conference, discussing Latin American history, sharing his thoughts about President Obama (who he dismissed as "Bush not-so-lite") and musing about the possibility of making a film about Iranian President Mahmoud Ahmedinejad.

"I don't know, that's a hot potato for me," Stone said when asked whether a movie about Ahmedinejad was in the works. "Obviously he's got bad press in the West."

"South of the Border" had its U.K. premier Monday at the Curzon Cinema in central London.