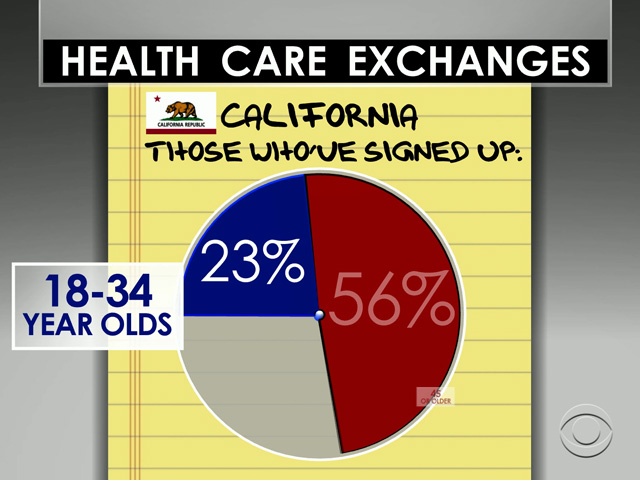 Repairs on the HealthCare.gov website continue, but some of the states that built their own health insurance websites are now reporting a surge of interest.

California's state exchange, Covered California, has run an aggressive advertising campaign.
Their latest numbers show more than 2,000 people a day have been signing up. Almost 80,000 Californians have now picked a plan.

But that success comes with a potential problem.

Insurance plans depend on creating pools with many more healthy policy holders (the young) than sick ones (older Americans.) That reduces the risk of losses for insurers and keeps prices affordable.

But in California, the young, between 18 and 34, make up only 23 percent of those who've signed up. Fifty-six percent are age 45 or older.

“It's not surprising to me that the early enrollees do tend to be older and perhaps more aware of their health-care problems,” said Marian Mulkey of a non-partisan research group, the California HealthCare Foundation.

Is she concerned that young people are taking their time to sign up while older people are rushing in?

“If there was nobody in that category, I'd be worried already,” she said. “But I would expect it to ramp up over time.”

Others states show a similar trend of the old signing up in much higher numbers than the young. In Kentucky, 57 percent of those enrolled are over the age of 44 and in Connecticut it's 62 percent.