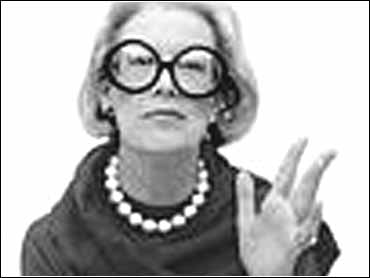 Carrie Donovan, the fashion editor whose outsized glasses and flamboyant speech gave her a second career touting T-shirts and cargo pants in Old Navy commercials, has died.
She was 73.

"She was perfectly cast for a fashion editor," said Karl Lagerfeld said. "She was the leading lady of that role."

With her trademark pearls and oversized black-rimmed glasses, Donovan was a one-of-a-kind fashionista. Her home on the Upper East Side had red walls, red furnishings and leopard carpeting, and she sprinkled her speech with French phrases.

Although she worked as a journalist for more than 30 years, well into the computer age, she wrote all her copy by hand - never having mastered the typewriter. And although she studied dressmaking, she never mastered needle and thread.

Donovan began working for Old Navy in 1997, taping a series of television ads that showcased her quirky image and fashion credibility.

She appeared in 42 spots, often sharing the screen with a dog named Magic.

Donovan, born in Lake Placid in 1928, became enamored with the fashion world at a young age. At 10, she sent actress Jane Wyman sketches for a wardrobe and received a handwritten reply. She graduated from the Parsons School of Design in 1950.

She is survived by her sister Joan Donovan of Cambridge, Mass.