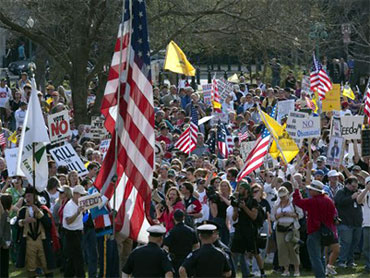 Frustrated by recent political setbacks, tea party leaders and some conservative members of the Oklahoma Legislature say they would like to create a new volunteer militia to help defend against what they believe are improper federal infringements on state sovereignty.

Tea party movement leaders say they've discussed the idea with several supportive lawmakers and hope to get legislation next year to recognize a new volunteer force. They say the unit would not resemble militia groups that have been raided for allegedly plotting attacks on law enforcement officers.

"Is it scary? It sure is," said tea party leader Al Gerhart of Oklahoma City, who heads an umbrella group of tea party factions called the Oklahoma Constitutional Alliance. "But when do the states stop rolling over for the federal government?"

Thus far, the discussions have been exploratory. Even the proponents say they don't know how an armed force would be organized nor how a state-based militia could block federal mandates. Critics also asserted that the force could inflame extremism, and that the National Guard already provides for the state's military needs.

"Have they heard of the Oklahoma City bombing?" said Joseph Thai, a constitutional law professor at the University of Oklahoma. The state observes the 15th anniversary of the anti-government attack on Monday. Such actions could "throw fuel in the fire of radicals," he said.

But the militia talks reflect the frustration of some grass roots groups seeking new ways of fighting recent federal initiatives, such as the health reform plan, which requires all citizens to have health insurance. Over the last year, tea party groups across the country have staged rallies and pressured politicians to protest big government and demand reduced public spending.

In strongly conservative states like Oklahoma, some legislators have also discussed further action to fight federal policies, such as state legislation and lawsuits.

State Sen. Randy Brogdon, R-Owasso, a Republican candidate for governor who has appealed for tea party support, said supporters of a state militia have talked to him, and that he believes the citizen unit would be authorized under the Second Amendment to the Constitution.

The founding fathers "were not referring to a turkey shoot or a quail hunt. They really weren't even talking about us having the ability to protect ourselves against each other," Brogdon said. "The Second Amendment deals directly with the right of an individual to keep and bear arms to protect themselves from an overreaching federal government."

"It's not a far-right crazy plan or anything like that," Berry said. "This would be done with the full cooperation of the state Legislature."

State militias clearly are constitutionally authorized, but have not been used in recent times, said Glenn Reynolds, a law professor at the University of Tennessee and an expert on the Second Amendment. "Whether someone should get a militia to go toe-to-toe with the federal government ... now, that strikes me as kind of silly," he said.

Some conservative legislators in Oklahoma say talk of a militia, which would be privately recruited, armed and trained, goes too far.

"If the intent is to create a militia for disaster relief, we have the National Guard," said Sen. Steve Russell, R-Oklahoma City, a retired Army lieutenant colonel. "Anything beyond that purpose should be viewed with great concern and caution."

Federal authorities say that radical militia groups have not emerged in Oklahoma, unlike many other states, in part because of the legacy of the Oklahoma City bombing. On April 19, 1995, an anti-government conspiracy led by Army veteran Tim McVeigh exploded a truckbomb outside the Alfred P. Murray Federal Building, killing 168 people.