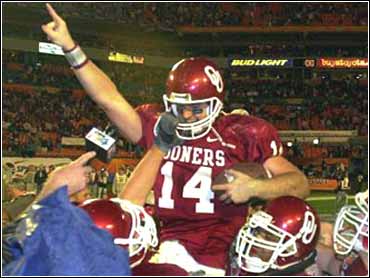 No. 1 Oklahoma used a smothering defense to shut down Florida State and Josh Heupel generated enough offense to give the Sooners a startling 13-2 victory in the Orange Bowl and their first national championship in 15 years.

"To be honest with you, we fully expected to play that way," Sooners coach Bob Stoops said Wednesday night. "And as a team, we expected to win."

Oklahoma (13-0), 10 1/2-point underdogs against the third-ranked Seminoles, completed a perfect season and made the issue of a split title a moot point.

Finishing as the nation's only unbeaten team, the Sooners were automatically crowned national champs under the Bowl Championship Series format.

They were also a unanimous No. 1 choice in the Associated Press media poll released early Thursday, thus confirming the Sooners as undisputed champs.

"Our players recognize that the history of Oklahoma is winning championships," Stoops said. "We already had six, now we have seven. We have a great history in the Orange Bowl."

"When I look at it now, I think it should have been Miami and Oklahoma," Seminoles coach Bobby Bowden said. "We didn't look like we belonged here."

"Give Oklahoma credit," Davis said. "To finish 13-0 against a strong schedule and to perform the way they did this evening is highly commendable."

It was the lowest scoring Orange Bowl since Penn State beat Missouri in 1970.

Heupel more than made up for his runner-up finish to Florida State's Chris Weinke in the Heisman Trophy race by outplaying him in the biggest game of his life.

The left-hander from Aberdeen, S.D., completed 25 of 39 passes for 214 yards and kept the Seminoles' defense off balance all night.

"It doesn't get any sweeter than this," Heupel said while celebrating on the field at Pro Player Stadium, where 76,835 attended the game.

Tim Duncan kicked two field goals and Quentin Griffin scored the clinching touchdown on a 10-yard run up the middle with 8:30 to play. Florida State avoided its first shutout in 12 seasons when Stanford Samuels tackled Oklahoma punter Jeff Ferguson in the end zone for a safety with 55 seconds remaining.

Florida State got the ball back on the ensuing free kick, but Weinke's 29-yard pass into the end zone was intercepted by Dontei Jones with 16 seconds left and the celebration began.

After Heupel took a knee and the clock ran down, The Pride of Oklahoma Band broke out in yet another rendition of "Boomer Sooner" and the players and fans converged on the field to celebrate.

For a flustered Florida State, the loss added another chapter to its list of blown title opportunities. Three times in the last five years, the Seminoles lost a bowl game that could have given them a championship.

For the 28-year-old Weinke, this may have been the poorest performance of his record-setting season. He was 25-of-51 for 274 yards and two interceptions and a fumble. He did not throw a touchdown pass for the first time this season.

"We simply could get nothing going offensively," Bowden said. "They did a great job of confusing us defensively."

Marshall finished with 11 tackles, one interception and one batted ball. With Oklahoma ahead by only 6-0 in the fourth quarter, All-American linebacker Rocky Calmus made his presence felt. He knocked the ball out of Weinke's hands, safety Roy Williams recovered and two plays later, Griffin ran for his touchdown.

After the game, Stoops thrust his fist in the air and hugged players and assistants after Oklahoma clinched its seventh national title.

"It's easy to say Oklahoma is back!" he said.

It was obvious both teams were coming off long layoffs. The Seminoles last played 45 days ago; the Sooners 32 days ago.

Surprisingly for two high-scoring offenses, the mistake-filled first half ended with the Oklahoma ahead 3-0 on Duncan's 27-yard field goal 7:44 into the game.

Weinke and Heupel each threw an interception, and Sooners receiver Andre Woolfolk fumbled after a 22-yard reception, with Clevan Thomas recovering at the OU 47.

On the next play, Weinke's pass was intercepted by Marshall. Oklahoma drove 44 yards in seven plays before the left-footed Duncan kicked his field goal.

Florida State, averaging 42.4 points per game, was shut out in the first half for just the second time this season. Miami led Florida State 17-0 at halftime en route to a 27-24 win over the Seminoles on Oct. 7.

First, he plucked a group of assistants from schools he used to work for, such as his brother Mike Stoops from Kansas State to run the defense and Steve Spurrier Jr. from Florida to coach the receivers. Then he drilled a winning attitude into his players, insisting that if they work hard and follow his plan, Sooner magic would follow.

When Heupel showed up from Snow Junior College in Utah to run a new wide-open passing attack, Stoops had his field general. OU went 7-5 in '99 and his players became believers

This season, the Sooners started No. 19 in the preseason poll, easily won their first four games and then faced perhaps the toughest October schedule in the nation No. 11 Texas, No. 2 Kansas State and No. 1 Nebraska. Not a problem as the Sooners pounded the Longhorns 63-14 in Dallas, beat the Wildcats 31-14 at Manhattan, Kan., and shut down the Cornhuskers 31-14 after falling behind by 4 points on the first two Nebraska possessions.

It appeared as if Oklahoma hit the wall in November, but rallied to win at Texas A&M 35-31 on Marshall's interception return for a late score; held off Oklahoma State 12-7; and clinched its Orange Bowl bid with a 27-24 win over K-State in the Big 12 title game.

In the weeks leading to their game against Florida State, the Sooners were given little chance of winning.

"We've been underestimated the whole season," Williams said before the game. "We're used to it. We're not worried about it. It's motivation."