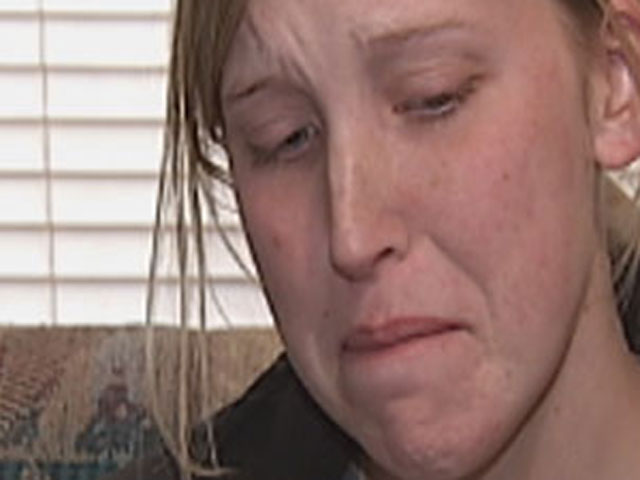 (CBS/AP) BLANCHARD, Okla. - A recently widowed young mother shot and killed an intruder on  New Year's eve, while she was on the phone with a 911 operator.

Sarah McKinley, 18, reportedly was home alone with her infant son just a week after her husband died of lung cancer, when two men tried to break into her house.

McKinley managed to push the couch to the front door to create a barricade, but that didn't stop the intruders.

"He was from door to door trying to bust in," McKinley told CBS affiliate KWTV. "I don't know what he had in his hand besides the knife. I believe he actually had a hammer in his hand at some point because he was hitting that back door with it."

McKinley called 911 and was on the phone with the operator during the entire 21 minute ordeal. She even asked the operator if she could shoot the intruder.

"They said I couldn't shoot him until he was inside the house," McKinley said. "So I waited until he got in the door and then I shot him."

Police said that Justin Shane Martin, 24, died at the scene and his alleged accomplice, 29-year-old Dustin Louis Stewart, ran away, but was later brought to police by his parents. He is currently in jail.

McKinley's mother told KWTV that Martin had followed her daughter around at a rodeo about two years ago.

She also said McKinley recently bumped into Martin at a convenience store, and that on Thursday night he showed up at her door, introducing himself as a neighbor. McKinley told her mother she did not know who he was until she pieced it all together after the shooting.

Police told KWTV that so far, their investigation revealed that McKinley did everything right in defending herself.

"The Oklahoma laws are clear on the home, and the right to your home are absolute," said Detective Dan Huff of the Blanchard Police Department.