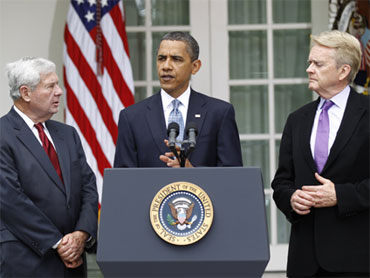 Oil runs so deep in American life that when President Barack Obama formed an independent commission to investigate the Gulf spill, he ran into something of an oil patch of his own.

Both commission chairmen had stock in BP as well as broader interests in the oil industry. Another commissioner, a university fundraiser, is chancellor at a school that received millions from BP. Another had substantial ties to Transocean, owner of the Deepwater Horizon rig that exploded in the Gulf of Mexico and set off the spill.

Ethics waivers released by the White House in response to an Associated Press request indicate the commissioners shed at least some of their investments and interests that might pose a conflict of interest.

But a full public accounting has not been made because the seven-member commission, despite Obama's relentless call for openness in government, is operating with fewer requirements for public disclosure than some previous panels, including the 9/11 commission of the Bush era.

The oil industry is so thoroughly connected with government and academia that it can be difficult to find prominent people for a commission who have not been touched by oil money. Even lifelong environmentalists are not exempt from that exposure; oil companies routinely support and work with conservationists on engineering and alternative energy research despite often being at loggerheads over drilling.

That appears, at least in part, to explain why Obama bypassed the most onerous disclosure rules in convening experts to investigate the spill, although the White House has not said so explicitly. The president has told commissioners to follow the facts "wherever they may lead - without fear or favor" and report back in six months on what caused the spill and how a repeat can be prevented or mitigated.

An AP review of each commissioner's background and the newly released waivers finds:

• Co-chairman Bob Graham, former senator from Florida, or his family owned over $20,000 in five oil company stocks with at least some spill-related connection at the end of last year, including BP and Transocean. His waiver letter says Graham sold BP and Transocean stock "in order to remedy an actual conflict of interest" and "this action will mitigate any real or apparent conflict of interest."

• Co-chairman William K. Reilly, a former Environmental Protection Agency director under President George H.W. Bush, has taken leave as a director for oil giant ConocoPhillips, a partner with BP on Alaskan projects. That position was worth $220,000 a year in stock and cash. He says he also holds 12 years of deferred compensation from past service to ConocoPhillips, and was asked to sell small investments in BP and the oil company Anadarko when joining the commission.

In the waivers, the Obama administration explains what interests of the commissioners might pose a problem and what they have done about them. The waivers do not spell out the value of any investments, but give more information than had been made public.

In contrast, Graham filed almost 3,000 pages on his varied interests as a member of the commission that investigated the financial crisis, which operates under stiffer disclosure rules.

Substantial ties exist between the oil industry and academia, too, although they tend to be less direct.

• Commissioner Cherry A. Murray is dean of Harvard University's School of Engineering and Applied Sciences, a recipient of subcontracts from the University of Texas at Austin that are based on a grant awarded by a collaboration of oil and energy companies, including Halliburton and BP. While serving as a commissioner, she will not raise money from oil companies for Harvard, her waiver stated.

• Commissioner Fran Ulmer is chancellor of the University of Alaska at Anchorage, an institution that has received money from BP and other oil companies over the years. She told the Obama administration she raised money for the university in the past, but had not asked BP for money in the past year. She agreed to refrain from any fundraising with the oil industry while serving on the panel.

Ulmer also resigned from board positions with a number of organizations, including the Alaska Nature Conservancy, where she had served since 2004. A review of records of BP's charitable arm, BP Foundation Inc., shows that the conservancy received at least $50,000 a year during that period. Ulmer said through a spokeswoman that she had no role in raising that money.

• Commissioner Donald A. Boesch, a professor of marine science and president of the University of Maryland Center for Environmental Science, sold stock in Transocean.

He also took a leave of absence as a member of the board of trustees of the Consortium for Ocean Leadership, which has a contract with Transocean to work in the Gulf. The Obama administration said Boesch advised he was not personally involved with the contract, but would maintain a financial interest in the consortium while serving on the commission. Boesch agreed, while serving as a commissioner, that he would not raise money from oil companies for his center.

• Commissioner Frances Beinecke, president of the Natural Resources Defense Council, is stepping down as director of the environmental group's political action committee and taking no part in the group's legal actions while on the panel.

It appears the commissioners are not expected to remain at a distance from such interests once the panel finishes its work. That leaves open the possibility that they could make recommendations of potential benefit to the companies or associations they can rejoin months down the road.

"It seems to me stretching it to think that we would have a significant impact on revenues, on earnings of companies, but it's not impossible, I suppose," he told AP.

"If the oil and gas, or drilling, for example, were shut down that would obviously have some impact on everybody who has their retirement fund in oil and gas shares, and, as I say, I do have those."

Reilly, for one, did not think the limited public disclosure rules for the panel should have been more expansive.

"Everybody serving on this commission is serving without any compensation at all - some at considerable expense to themselves," he said.

Obama spokesman Ben LaBolt said, "Co-chairs Graham and Reilly have both promoted conservation and sustainable development throughout their many years in public service, and their records belie any claim that they will not perform their work in an objective and judicious manner."

Graham told the AP that when he was filling out his financial form for the commission membership, he thought it would be made public. He took no position on whether it should be. Graham said he had his family divest oil company holdings after he was approached to serve on the panel in late May and before his appointment a few weeks later.