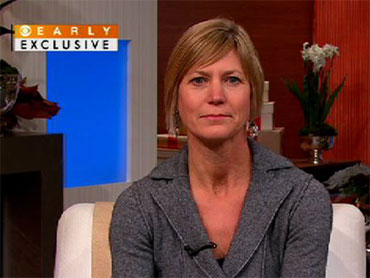 When Laurie Russo, of Cincinnati, started receiving threatening and violent phone calls from a man who was stalking her, she called police.

But, reports CBS News National Correspondent Jeff Glor, in the end, it was a process she developed on her own that put the Cincinnati woman's stalker behind bars.

For four months, a terrified Laurie Russo received the disturbing calls -- and she had no idea who was calling.

In repeated calls to her home number, the caller would tell Laurie there was nowhere to hide, threatening her and her son. He knew details about where she lived; he said he'd been on her porch and in her hot tub. He always seemed to know when she was home.

"Engagement" To Drew Peterson Was "Stunt"

Russo installed security systems, reinforced all of her windows, and dead bolted her bedroom every evening. The police ran phone taps, learning the calls usually came from local gas stations. But every time she called 911, he was gone before police arrived.

So she investigated on her own, creating a spreadsheet of the incoming phone numbers and the corresponding gas stations. When she received a call, she immediately phoned the gas station and asked if they saw anyone.

Thomas McComas, a Shell gas station attendant, told CBS News, "I answered the phone and the person on the other end said there is a car in the parking lot and they needed the license plate."

McComas was able to catch the plate number that, police say, was from a vehicle belonging to Dr. George Bishop. Surveillance video would later show Bishop using the pay phone at the exact time Russo received the call.

At 68 years old, Bishop is a highly respected political science professor at the University of Cincinnati, who police say has absolutely no connection to Russo.

Detective Jill Schramm, of the Cincinnati Police Department, said, "What surprised me most about this case is the fact that there is no common thread with the victim and suspect. That's what I find surprising. Why her?"

Although his motivation is still unknown, Russo and her son, Brennan, can finally sleep soundly, knowing the threats have come to an end.

Glor added the Department of Justice estimates 3.4 million people in the U.S. are victims of stalking every year, and 60 percent don't report the crime.

Bishop was convicted last Thursday in an Ohio court. He will be sentenced on Feb. 2. He faces a maximum of 18 months in prison.

As for Russo, she says she's relieved.

Hill noted that Russo came face-to-face with Bishop in court for the first time.

Hill said, "He was staring at you. What was that like for you?"

Russo said, "I'd seen pictures, but the first time in-person, and it was terrifying, but in a lot of respects, it was nice to see justice being done."

But how did she devise this plan to catch him?

Russo explained, "Well, it happened so quickly, when you get a phone call, you have, what, I mean he's on the phone for maybe a minute. So, even if I call 911 or call the police force direct, it's hard for them to get there in time. So, I started thinking, I'm going to have to figure out how I can make this work."

Hill said, "Understandably, you were terrified. He knew things about you that seemingly couldn't have known without being inside your home."

Russo said, "Each call seemed to get progressively angrier and more information, he knew my son was away at college and I lived alone, presumably in my property and (knew) things about my backyard, and knew I had a hot tub that was sunken and would only know that if you've been in my backyard. He referenced that, referenced knowing my car and everywhere I government he referenced that he knew I lived alone."

Hill said, "When you think about this all of a sudden you must second-guessing every single person around you."

"The poor neighbors, all the ones I didn't know. … If they changed the way they had their shades, 'My gosh, are they looking at me?' The neighbors I knew were great - they were my second set of eyes."

As for her stalker, Russo says she has "no idea" how she became a target. But the police - and even the judge on the case - said they were thankful for her help, Russo said. And she said she's grateful for their work, too.
"They couldn't have done more for me, patrolling the street more and just being there," she said.

She said, "(I'm) really thankful because without him and his non-hesitation to go just get me the license plate number."

As for Bishop, Russo said she hopes he'll receive the maximum 18-month sentence.

However, Russo says her life has changed forever.

Hill asked, "Are you still checking over your shoulder all the time?"

Russo said, "Oh, yeah. I think it'll be something that I always do to a less degree but, yeah."