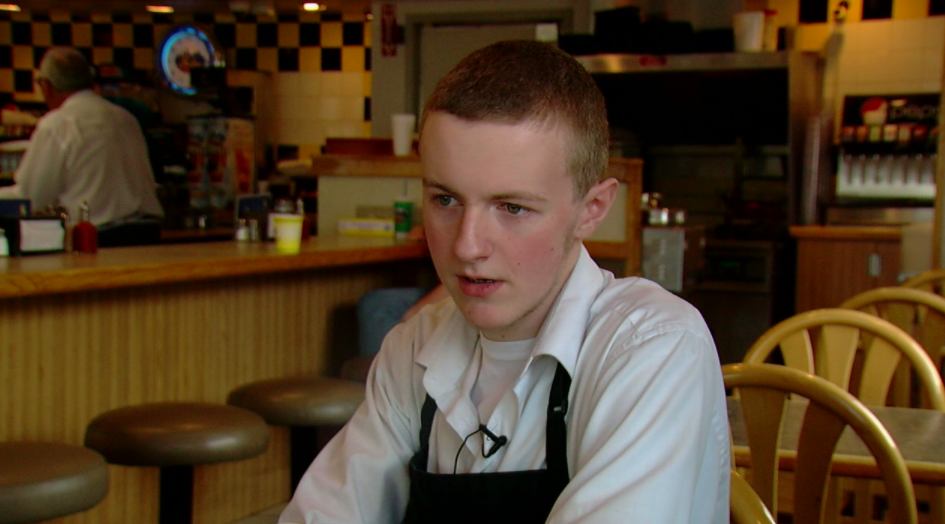 It was only his second day at work, but a 16-year-old has already made his mark on the job.

Austin Goddard was working hard to make a good impression at work at Skyline Chili in Cincinnati, Ohio.

"I was bussing a table, just getting the dishes and silverware and the cups and just putting them in the pan where they go,"he told CBS affiliate WKRC.

The 16-year-old recently got hired after spending some time volunteering to help out at the restaurant, where his mother works.

"I'm a dishwasher. I've been here almost a year and he volunteered with me on Saturday nights mostly," said Shannon Goddard.

As Austin was working in late June, he saw a customer, a stranger who looked like he needed help.

"Larry just collapsed right there where he was eating and they asked if anyone knew CPR and I just ran up and started doing CPR on him," Austin said. "I just had it on the chest and just kept my elbow straight just doing it with enough force and pressure like you're supposed to."

Medics rushed the man to the hospital and Austin had an interesting story to tell his mother when he got home.

"I thought it was amazing. He has the complete different reaction to emergencies than I do. I freeze. You know, a lot of people do and he like goes into action," Shannon said.

A few days later, the man's family dropped by the restaurant with a picture of him recovering nicely and a tray of Skyline food in front of him. The picture was a 'thank you' to Austin for having the courage to step up and help.

"There's still kids that are not out there robbing and shooting people and killing people. I'm just glad I was able to save a life instead of take a life," said Austin.

Austin goes to South Ripley High School in Indiana. He says last year all of the 10th graders were certified in CPR.