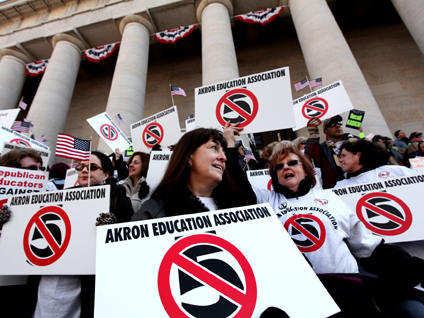 COLUMBUS, Ohio - As thousands of protesters kept watch, an Ohio state Senate panel considered whether to ban all public workers in the state from striking and subject them to fines and possible jail time for participating in walkouts.

The proposals were changes made to a bill restricting collective bargaining, an issue that is igniting in statehouses across the country, most notably in Wisconsin, where a scheduled vote on a similar bill prompted Democratic lawmakers to flee the state.

The Ohio Senate committee could vote on the changes as early as Wednesday and send the measure to the full Senate, where Republicans hold a 23-10 majority. The committee's chairman, state Sen. Kevin Bacon, said he had the votes to move the legislation forward but wanted to give lawmakers time to review the revisions.

"Right now, it's not a matter of about getting the votes," Bacon said. "It's a matter of being transparent, letting everyone see the proposed changes and what the final bill is going to look like."

Democrats and union groups have rallied thousands of state workers, teachers, firefighters, police and other public employees they say would be hurt by the measure. An estimated 8,500 people gathered inside and outside the Statehouse to protest the legislation.

"We've got to show that there are an awful lot of people in Ohio in the middle class that don't want any part of this," said Steve Turner, 67, a retired teacher from Grove City.

The bill's sponsor, state GOP Sen. Shannon Jones, offered a 98-page amendment during a brief committee hearing Tuesday. The revisions include the ban on striking for all 350,000 public employees in Ohio. They also outline penalties for violators including a fine of up to $1,000, up to 30 days in jail, or both.

The initial bill would have stripped all collective bargaining rights for state workers, but would have allowed strikes.

Jones wants to alter the measure to ban strikes and set limits on collective bargaining. Her changes would allow public workers in unions to negotiate their wages, hours and certain working conditions, such as safety. They would not be able to negotiate their health care, sick time or pension benefits.

Bacon said some of the changes could be viewed as relaxing the measure, while others — such as the strike ban — could be seen as strengthening it.

The changes also set up a new process to settle public workers' disputes. If the parties couldn't reach agreement, they could request the State Employment Relations Board to intervene and appoint a mediator. Local or state elected officials would have the last say in any unresolved contract disputes.

The bill gets rid of binding arbitration, the current way police officers and firefighters resolve contract disputes as an alternative to strikes.

Mark Sanders, president of the Ohio Association of Professional Fire Fighters, said the union's lawyers were reviewing the proposed changes.

"It doesn't do anything to improve the bill in our regard," he said. "Just in my brief look at the summary, I think makes it worse and it politicizes the end point of a contract negotiations — what was done by a neutral party, a professional."

A Senate Majority Caucus spokesman said the changes reflect ideas backed by Kasich. "It certainly increases the chances of the bill being signed by the governor" said Jason Mauk.

Appearing at an event in Cincinnati, Kasich said he was aware of some of the changes that were coming and believed they were "fine."

"It's difficult for people who are going to experience change," he said of the protests. "Some of it is based on rumors and rumors on top of rumors. But overall, I think this is a fair bill that is one piece of an overall reform agenda."

Kasich also urged his supporters in fundraising e-mail Tuesday to call their elected officials and ask them to back the collective bargaining bill.

Senate Democrats continued to oppose the measure after the revisions were announced. They called for more testimony on the new changes.

The panel's ranking Democrat, Joe Schiavoni, said his party got the amendment one minute before the hearing, and had no chance to review it to ask informed questions. "That's ridiculous," he said.

That was the sentiment expressed by at least one Republican on the Senate labor committee.

In the Cincinnati Enquirer's online edition, state Sen. Bill Seitz wrote Tuesday that the new version of the Ohio bill was being prepared "in secret."

In an opinion post for the website, Seitz said he was taking a cue — or as he called it, "tea party lessons" — from the health care debate in Washington, D.C. He wrote that he wouldn't support the bill unless he read it and understood it. "We should expect no less from Republican majorities than we demanded of Democrat ones."

Seitz did not immediately return messages seeking comment about the post or his view on Jones' amendment.