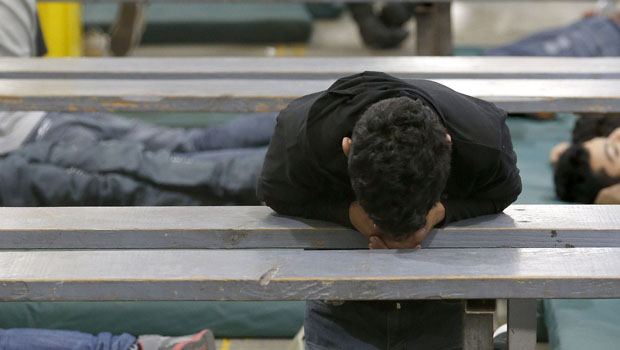 LAWRENCEVILLE, Va. - Contrite federal officials apologized to residents of a tiny southern Virginia town Thursday night for keeping them in the dark as they prepared to bring in hundreds of Central American children and teenagers to a temporary shelter.

"Absolutely, we feel we didn't do it right here," said Mark A. Weber, a spokesman for the U.S. Department of Health and Human Services. "We're here to listen to the community. We're here to sort this out." He was speaking prior to the meeting.

An overflow crowd packed the 900-seat Brunswick High School auditorium in the farming town of nearly 1,500. Many residents arrived at the school carrying small signs that read "No illegal immigrants," but they were told to leave them outside. Numerous law enforcement officers were on hand.

The crowd heard immigration and refugee resettlement officials describe their botched plan to bring in children from resettlement camps in the South and Southwest. They cast the mission as a humanitarian effort to shelter children from Guatemala, El Salvador and Honduras who are fleeing their homes by the tens of thousands to escape violence and poverty.

More than 47,000 children, primarily from Central America, have been apprehended at the Mexican border since the start of the budget year.

The government put the Lawrenceville program on hold after a private agreement between officials from the now-shuttered St. Paul's College and the government became public.

Officials with the Administration for Children and Families have declined repeated requests by The Associated Press to outline the Lawrenceville shelter plan.

Local officials demanded answers this week and the government brought in a half dozen officials to explain the purpose of the program to local residents.

During the meeting, one federal official after another apologized for the missteps.

Essie Workie, a regional official with an HHS agency overseeing the shelter program, was the first to apologize for the "communication challenges." She quickly added, "But we are here to correct that."

The officials faced a formidable task before a crowd that openly scoffed at portions of the presentation.

Workie assured them, however, that the plan to shelter the students at St. Paul's would be withdrawn if the government could not win over local residents.

Dozens of residents lined up along both aisles leading to the front of the auditorium to voice their opinions, including Aaron Smith, 32, who said he is a Marine Corps veteran and did a tour in Iraq.

"We will not be strong-armed by federal officials," Smith said. "We will not be pushed around." The crowd cheered his comments, and he received high-fives from the audience as he left. Outside the school Smith said townsfolk primarily objected to the way the planned shelter was handled, but also objected to who would be housed in the community.

"We do not want illegal aliens in our town," he said.