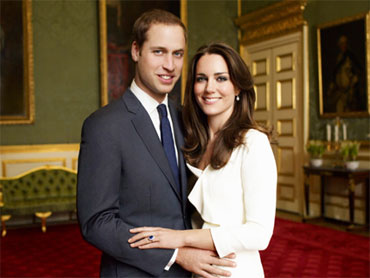 Britain's Prince William and Kate Middleton are looking relaxed, poised and very much in love in a pair of official photos released to mark their engagement.

One of images shows the couple, dressed in jeans and casual tops, smiling in each other's arms.

The other, more formal, depicts them standing together in a state room at St. James's Palace.

The pictures, released today by the prince's office, were taken by Peruvian fashion photographer Mario Testino. He's a royal family favorite who captured some of the most iconic images of William's late mother, Princess Diana.

Testino says the couple appeared "in their prime and brimming with happiness" when he photographed them on Nov. 25.

William and Middleton, both 28, announced last month that they will marry on April 29 at Westminster Abbey in London.