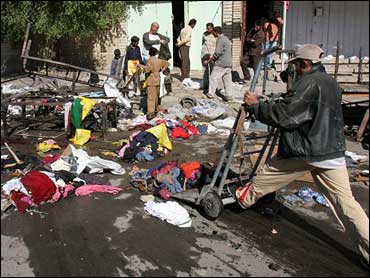 About 150,000 Iraqis have been killed by insurgents since the U.S.-led invasion more than three years ago, a senior Iraqi official said Thursday.

For every person killed about three have been wounded in violence since the war started in March 2003, Iraq's Health Minister Ali al-Shemari told reporters in Vienna.

The 150,000 — three times more than other estimates — was the first overall casualty figure for the war to be released by the Iraqi government, which took office on May 20.

Al-Shemari did not explain how he arrived at the figure or say whether that number included Iraqi soldiers and police, as well as civilians. Also unclear was if it included Iraqis killed in sectarian violence or only in insurgent attacks. But he said the count was of "innocent" victims, suggesting civilians only.

In October, the British medical journal The Lancet published a controversial study contending nearly 655,000 Iraqis have died because of the war — a far higher death toll than other estimates. The study, which was dismissed by President Bush and other U.S. officials as not credible, was based on interviews of households and not a body count.

Al-Shemari disputed that figure on Thursday.

"Since three and a half years, since the change of the Saddam regime, some people say we have 600,000 are killed. This is an exaggerated number. I think 150 is OK," he said.

Other estimates, largely based on body counts or media reports, have held that about 50,000 Iraqi civilians have died in the conflict.

A private group called Iraqi Body Count says it has recorded between 46,863 and 51,698 Iraqi civilians killed by military intervention in Iraq. The group says that includes civilian deaths due to U.S.-led military action as well as insurgents and other violence.

Al-Shemari, a Shiite ally of anti-U.S. radical cleric Muqtada al-Sadr whose militia has been blamed for much of the sectarian violence, focused on insurgent attacks, saying they were exhausting his ministry's finances and that hospitals needed aid.

"We need help, we need donations," he said.

Accurate figures on the number of people who have died in the Iraq conflict have long been the subject of debate. Police and hospitals often give widely conflicting figures of those killed in major bombings.

In addition, death figures are reported through multiple channels by government agencies that function with varying efficiency.

In other Iraq news:

Previous casualty figures provided by Iraq's Health Ministry, which are based on counts provided by hospitals and city morgues, have been much lower than al-Shemari's estimate. The ministry said earlier this year, for example, that 4,024 civilians deaths were reported for all of 2005.

But the government reportedly has barred the Health Ministry from releasing figures after they gained widespread international attention in July, when they showed that some 6,000 Iraqi civilians had died over the previous two months, or about 100 people a day amid spiraling sectarian violence.

The man who runs Baghdad's main morgue said Thursday that it received approximately 1,600 bodies in October. Dr. Abdul-Razzaq al-Obaidi said that figure did not include victims of sectarian violence who are taken to Baghdad's many hospitals and whose deaths are not officially added to the death totals.

Al-Shemari said Iraq needed at least 10 years to rebuild its infrastructure and the medical situation in the country was "gloomy." Medical supplies were lacking and sometimes took months to reach the country from abroad, he said.

The minister said that because of roadblocks, sick people could not get to hospitals.

No hospital has been built in Iraq since 1983, he said, adding that the country's 15,000 available hospital beds were well short of the 80,000 beds he said would be needed to handle the number of casualties.

Al-Shemari also noted that many Iraqi doctors had fled the country and that primary care and emergency medical services needed urgent assistance.

Al-Shemari is a controversial figure and some U.S. officials have complained that his ministry has diverted supplies to al-Sadr's Mahdi Army militia.

Last August U.S. troops arrested seven of his personal guards in a surprise pre-dawn raid on his office. The United States never explained the reason for the raid but Iraqi officials said Americans suspected the guards were part of a militia.