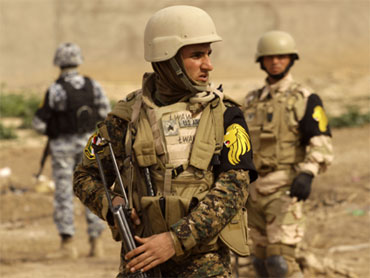 The top American military commander in Iraq said Tuesday that U.N. peacekeeping forces may need to protect disputed territories in the nation's north if tensions between Kurds and Arabs haven't eased by the time U.S. troops leave in 2011.

In an interview with The Associated Press, U.S. Army Gen. Ray Odierno said U.N. peacekeepers might be one option if Kurdish soldiers haven't integrated into the Arab-dominated Iraqi army over the next year. He said he hopes the U.N. forces won't be necessary.

But Odierno acknowledged that tensions between the two cultures - and the oil-rich land in Iraq's north that each side claims as their territory - have been simmering for years without resolution. Iraq's Kurds want several areas of Ninevah, Tamim and Diyala provinces to be part of their autonomous region, a move opposed by the Arab-dominated central government.

"If we have not integrated, we might have to think of some other mechanism," Odierno said. "I don't know what that is yet. Is it a Chapter 6 U.N. force? I don't know. But that's something that has to be worked out, and it'll be depending on how far we are able to bring this process."

Chapter 6 of the United Nations charter refers to peacekeeping duties like investigating and mediating disputes.

Odierno said that if Kurdish troops are working well within the Iraqi army, "then we'll let them do it. It's too early to tell. But that's an issue that we'll have to watch and work through."

The prospect of U.N. peacekeepers raises questions about whether Iraq will be stable by the time all U.S. troops are required to leave at the end of 2011 under a security agreement between Washington and Baghdad.

It's widely believed that Iraq's leaders may ask the United States to revisit that agreement and leave at least some troops behind after 2011 to give the nation's uneven army and police forces more time to train.

Odierno maintained that decision would be up to the incoming Iraqi government, whose leadership is still being negotiated after no clear winner emerged from the March parliamentary elections. But he left open the door that some U.S. troops might stay. 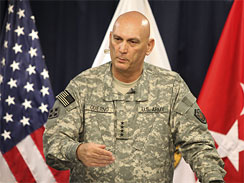 (AP Photo/Karim Kadim )
"I don't see a large U.S. presence here. I really don't," he said. "They might want technical support, but again, that's their decision, not ours."

The United Nations would need to approve a resolution before sending peacekeeping troops to Iraq, and doing so would significantly change its political mission. The current U.N. mission in Iraq does not include support for peacekeepers.

A phone call and e-mail to a U.N. spokeswoman in Baghdad for comment were not immediately returned Tuesday.