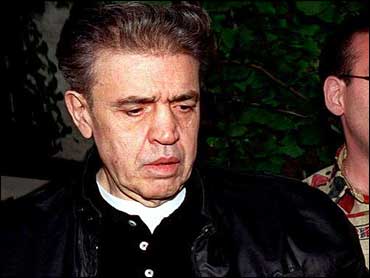 Vincent "The Chin" Gigante, the powerful mafia boss who authorities said feigned insanity for decades in an attempt to avoid prosecution, ended the ruse Monday by admitting he misled doctors evaluating him.

Gigante, 75, pleaded guilty to obstruction of justice in U.S. District Court in Brooklyn.

"Is that true?" Glasser asked Gigante.

"Yes, your honor," he replied, nodding his head slowly.

Under the plea bargain, he received three years in jail and three years' supervised probation.

Gigante - known as "the Oddfather" for his insanity ruse - could have faced up to 20 years in prison - a virtual life sentence. He's already serving a 12-year stretch for his 1997 conviction on racketeering and murder conspiracy.

The plea settles an indictment that charged Gigante with running the Genovese family from behind bars in Texas, using his 45-year-old son, Andrew, to ferry orders. The younger Gigante took a plea as well, and will be sentenced to two years, prosecutors said.

Before leaving the courtroom, the elder Gigante waved broadly at Glasser and exited through a side door.

"Thank you," he told Glasser.

Prosecutors claimed that audio tapes of Gigante, made as he entertained visitors in prison, demonstrated that he directed Genovese business in "a coherent, careful and intelligent" manner.

Since the 1970s, Gigante had turned dementia into a full-time job, avoiding incessant law enforcement efforts to jail him. The Genovese family chieftain was reputedly the nation's No. 1 Mafioso, even as he shuffled through Greenwich Village in pajamas and a bathrobe.

He rarely strayed from the neighborhood, yet authorities said he controlled the New Jersey waterfront and ordered murders to settle a Philadelphia mob war.

Relatives and hired doctors insisted Gigante suffered from paranoid schizophrenia, dementia and Alzheimer's disease. At the 1997 trial, Gigante sat in a wheelchair, mumbling silently, seemingly oblivious to the proceedings. His lawyers claimed they could not communicate in any "meaningful way" with a client who didn't know where he was, or why.

But federal prosecutors, two judges, several psychiatrists and, ultimately, a jury agreed that it was all a brazen act to avoid the law.

Gigante had assumed command of the Genovese family in the early 1980s as it became the nation's most powerful Mafia crew. At the height of his power, authorities said, the boss commanded an illegal domain that made money from the booths at Little Italy's San Gennaro Festival to the docks of Miami.

He was so feared and respected by fellow mobsters than none would speak his name aloud, instead pointing to their chins to signify the subject of conversation. Even John Gotti, the murderous head of the Gambino family, would tread lightly around Gigante.

The native New Yorker first employed the mental incompetence dodge in 1970, when he was accused of bribing the entire five-man police force of Old Tappan, N.J. But once it succeeded, he adopted the defense as a lifestyle.

FBI agents serving Gigante with a subpoena once found him standing naked in a running shower, clutching an open umbrella. Another time, upon spotting agents watching him, he fell to the sidewalk and prayed.