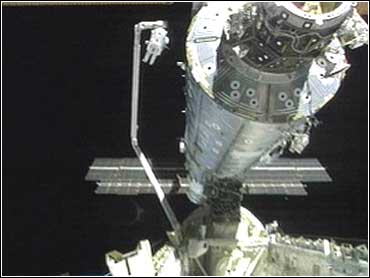 The two men aboard the international space station heard a strange metallic sound again Friday, four months after being startled by it the first time.

Cosmonaut Alexander Kaleri was talking to flight controllers in Moscow when he heard a loud drum-like noise coming from the instrument panel of the station's Russian-built living quarters.

Kaleri and astronaut Michael Foale first heard the mystery noise - described as a flapping sheet of metal - back in late November. Neither the crewmen nor flight controllers were ever able to identify the sound, although engineers suspected space junk may have damaged something on the exterior.

Kaleri said Friday morning's noise came from about the same place as before and sounded the same.

"I had the headset on, so I didn't hear it very clearly. But it sounded sort of like a drum. It sounds sort of like a sheet of something being bent," the cosmonaut reported.

Russian flight controllers told Kaleri that they would try to figure out where the noise was coming from, and speculated that perhaps one of the systems inside the station was the source of the problem, rather than something on the outside.

NASA officials, however, said all systems appeared to be operating properly.

"It's very strange," Russian Mission Control said. "I doubt that it would be a coincidence that you're hearing the same thing coming from the same place."

During a spacewalk in February, Kaleri and Foale were supposed to check the exterior of the space station where the noise originated last November. But Kaleri's spacesuit overheated and became damp, and the spacewalk had to be cut short, so the men did not have time to inspect the area.

Kaleri and Foale's six-month space station mission is almost over. Their replacements are due to arrive in another 2½ weeks.