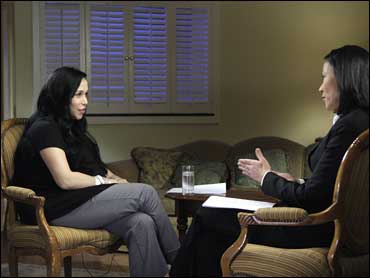 Publicist Joann Killeen may have been ready for the worldwide attention brought by her client - a jobless, single mother of octuplets - but she was not prepared for the avalanche of death threats that followed.

Killeen, president of the Killeen Furtney Group, which has represented octuplets mother Nadya Suleman, announced Saturday the public relations firm would be stepping down because of death threats.

Killeen also said the mother now has an agent: Wes Yoder, the same man who arranged book and music deals for the McCaughey septuplets a decade ago and publicity for controversial pastor Rick Warren.

The firm was ending its free representation after receiving at least 100 graphic e-mailed threats and swarms of nasty voicemails that went to the Los Angeles agency and even to some of its other clients, Killeen said.

Some messages threatened Suleman but others were aimed at her spokespeople.

"They'd put me in the wood chipper and throw me in the bottom of the ocean and hope I die," Killeen said.

"We've gotten her through the worst part of it and now they are putting their venom and anger toward us," Killeen said.

Word that the 33-year-old single unemployed mother is receiving public assistance to care for the 14 children she conceived through in vitro fertilization has stoked furor among many people.

"We've never had a public reaction to us representing a client pro bono like this, ever," Killeen said.

But longtime Hollywood publicist, Michael Levine, said he's come to expect it with his line of work and gets about one death threat a month.

"Death threats have about as much impact on my life as me saying 'Happy Valentines' to you," said Levine, adding that he received multiple threats when he represented Michael Jackson. "It's like going to war. When you represent someone who's going through this kind of controversy you are in the middle of a September 11 kind of intensity."

Suleman, who gave birth last month, is living at an undisclosed location. She has set up a Web page to accept donations to help the octuplets, who remained hospitalized.

Meanwhile, Killeen said Suleman told her that she had reached an exclusive representation deal with Yoder.

His Ambassador Agency, Inc., bills itself as the oldest Christian-based talent agency in the United States.

The agency, which has a Nashville mailing address and a street address in Franklin, Tenn., promotes speaking engagements, publicity and media deals for clients.

Killeen said the agreement with Yoder and her agency's decision to step down were unrelated. She had not yet contacted Yoder and was unclear on the specifics of Suleman's deal with him, Killeen added.

A call and e-mail left for Yoder on Saturday were not immediately returned.

A decade ago, Yoder was the spokesman and agent for Bobbi and Kenny McCaughey, the Iowa couple who had the world's first surviving septuplets on Nov. 19, 1997. They were later involved in book, music and TV commercial deals.