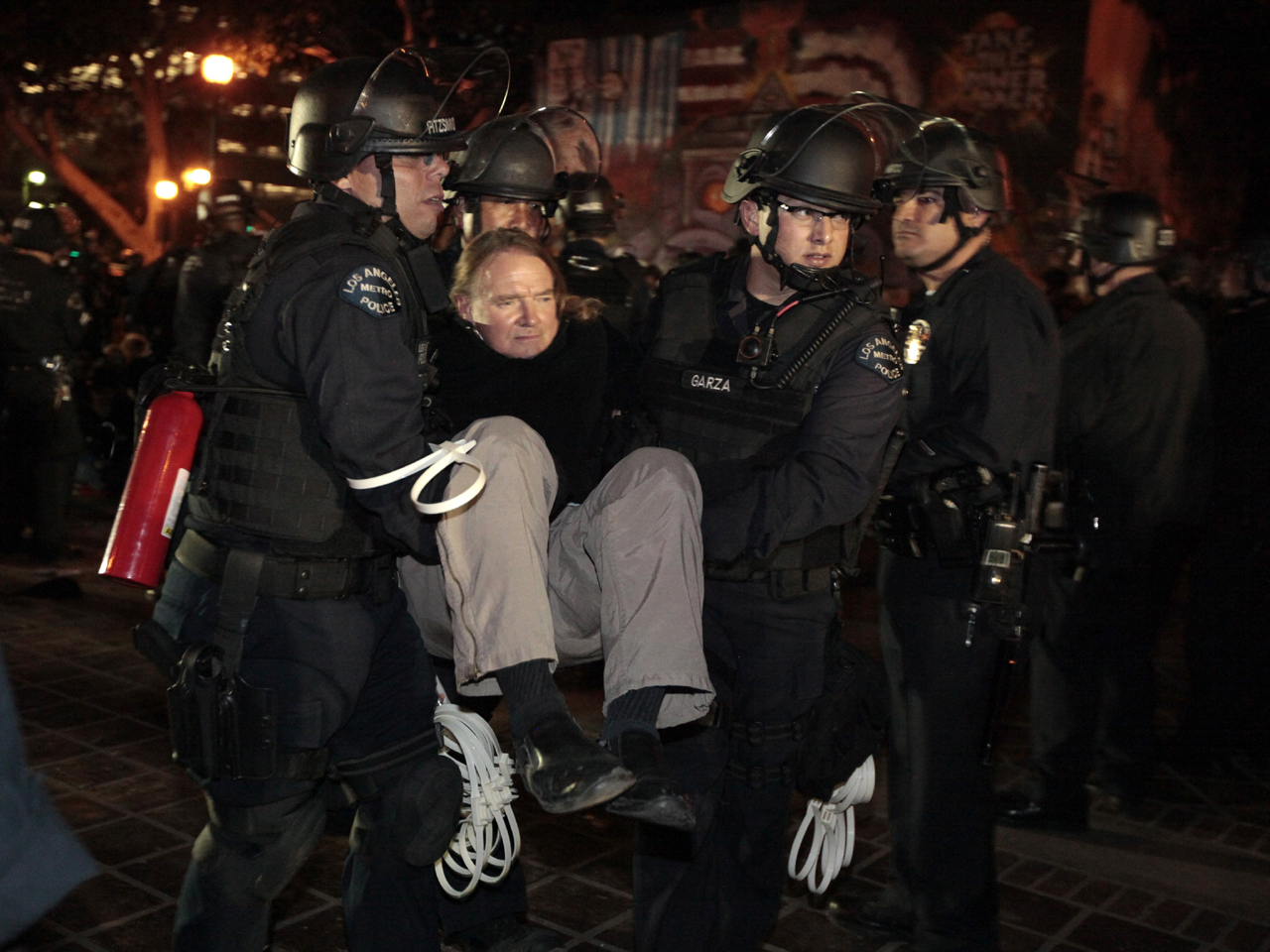 LOS ANGELES - More than 1,400 police officers, some in riot gear, cleared the Occupy Los Angeles camp early Wednesday, driving protesters from a park around City Hall and arresting more than 200 who defied orders to leave. Similar raids in Philadelphia led to 52 arrests, but the scene in both cities was relatively peaceful.

Police in Los Angeles and Philadelphia moved in on Occupy Wall Street encampments under darkness in an effort to clear out some of the longest-lasting protest sites since crackdowns ended similar occupations across the country.

The Los Angeles officers staged for hours outside Dodger Stadium before the raid. They were warned that demonstrators might throw everything from concrete and gravel to human feces at them.

"Please put your face masks down and watch each other's back," a supervisor told them. "Now go to work."

The police operation was planned at night because downtown is mostly vacant, with offices closed, fewer pedestrians and less traffic, but a spokesman said it could make officers more vulnerable. "It's more difficult for us to see things, to see booby traps," Lt. Andy Neiman, told pool reporters. "Operating in the dark is never an advantage." Neiman said the force was prepared to deal with demonstrators holed up in the camp or those who had climbed up trees in the small park.

Before police arrived in large numbers in Los Angeles, protesters were upbeat and the mood was almost festive. A protester in a Santa Claus hat danced in the street. A woman showed off the reindeer antlers she had mounted on her gas mask.

Fireworks exploded in the sky at one point. Later, as helicopters hovered above, someone blew "The Star Spangled Banner" on a horn.

Campers planning to defend the camp and hold their ground barricaded entrances to the park with trash cans.

Gia Trimble, member of the Occupy LA media team, said a lot of people committed to the cause would stay and risk arrest. "This is a monumental night for Los Angeles," Trimble said. "We're going to do what we can to protect the camp."

In their anticipation of an eviction, the Los Angeles protesters designated medics designated with red crosses taped on clothing. Some protesters had gas masks.

Organizers at the camp packed up computer and technical equipment from the media tent.

Two men who constructed an elaborate tree house lashed bamboo sticks together with twine to push away any ladder police might use to evict them.

Members of the National Lawyers guild had legal observers on hand for an eviction.

As officers first surrounded the camp, hundreds of protesters chanted, "The people united will never be defeated."

Dozens of officers in riot gear flooded down the steps of Los Angeles City Hall just after midnight and started dismantling the two-month-old camp two days after a deadline passed for campers to leave the City Hall lawn. The officers came from a wide range of specialized units within the force, including the bomb squad, and the arson unit. Scores of officers in hazmat suits also were sent in to deal with potentially unsanitary conditions in the park.

The raid had a military precision and officers in helmets and wielding batons moved in and began making arrests after several orders were given to leave the small park. Officers flooded down the steps of City Hall just after midnight and started dismantling the two-month-old camp.

Defiant Los Angeles campers who were chanting slogans as the officers surrounded the park, booed when an unlawful assembly was declared, paving the way for officers to begin arresting those who didn't leave.

In the first moments of the raid, officers tore down a tent and tackled a tattooed man with a camera on City Hall steps and wrestled him to the ground. Someone yelled "police brutality." Teams of four or five officers moved through the crowd making arrests one at a time, cuffing the hands of protesters with white plastic zip-ties. A circle of protesters sat with arms locked, many looking calm and smiling.

Opamago Cascini, 29, said the night had been a blast and he was willing to get arrested.

"It's easy to talk the talk, but you gotta walk the walk," Cascini said.

Police used a cherry picker to pluck five men from trees. Two others were in a tree house, one wore a crown and another taunted police with an American flag.

Beanbags fired from shotguns were used to subdue the final three protesters in a makeshift tree house outside Los Angeles City Hall, police Cmdr. Andrew Smith said, describing it as a minor use of force incident. LAPD officer Cleon Joseph added there were no injuries and no drugs or weapons were found during a search of the emptied camp, which was strewn with trash after the raid. City workers put up concrete barriers to wall off the park while it is restored. As of 5:10 a.m. PST, the park had no protesters.

Police Chief Charlie Beck praised the officers and the protesters for their restraint and the peaceful way the eviction was carried out.

"It was an amazing show of peaceful police power," reports CBS News correspondent Bill Whitaker, who says the entire operation took only about three hours, "and it was all done with no violence."

When protesters first showed up with their tents at the beginning of October, Whitaker says they were welcomed by L.A. Mayor Antonio Villaraigosa, but with no end in sight, he ordered the evacuation.

Villaraigosa issued a statement after the raid saying the city took "a measured approach," and that during the park's closure a "first amendment area" would remain open on City Hall steps so people can continue to speak their minds.

The raid in Los Angeles came after demonstrators with the movement in Philadelphia marched through the streets after being evicted from their site. Over 40 protesters were arrested after refusing to clear a street several blocks northeast of City Hall, said Philadelphia Police Commissioner Charles Ramsey. They were lined up in cuffs and loaded on to buses by officers. Six others were arrested earlier after remaining on a street that police tried to clear.

"The police officers who were involved in this operation were hand-picked for this assignment," Philadelphia Mayor Michael Nutter said. "They're highly trained and disciplined and showed a tremendous amount of restraint and professionalism in carrying out this morning's operation."

Nutter said the eviction had been planned for several weeks and went off without largely without problems.

Ramsey said he would have preferred to evict the protesters without making arrests, but some refused orders to clear the street and had to be taken into custody. Three officers had minor injuries. One protester was injured when a police horse stepped on her foot, Nutter said.

The Philadelphia protesters were ordered to clear their encampment in part because a $50 million renovation project was due to start at the City Hall plaza this fall.

"Dilworth Plaza was designated as a construction site," Ramsey said. "They had to vacate. They knew that from the very beginning."