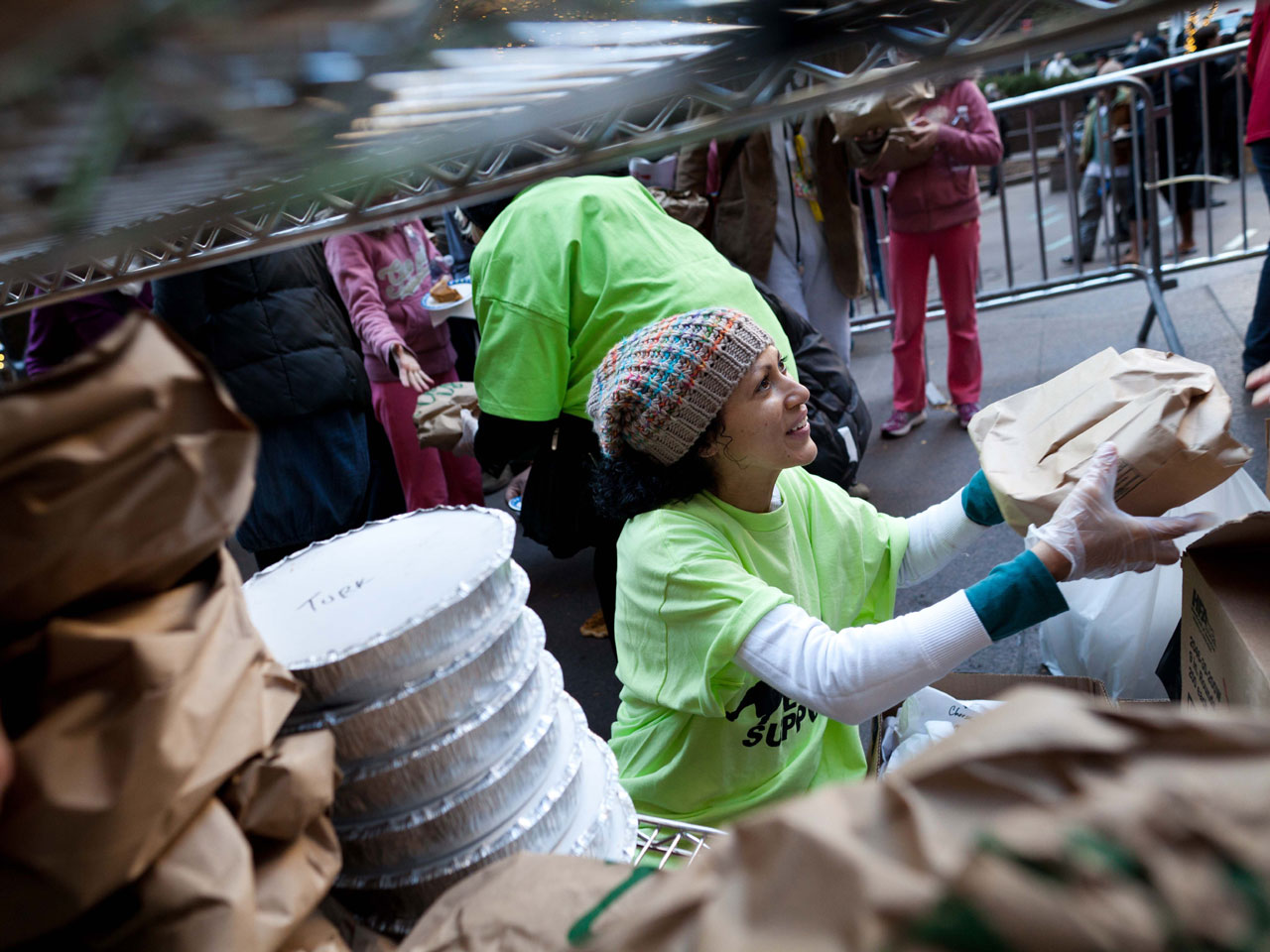 SAN FRANCISCO - Most Americans spent Thanksgiving snug inside homes with families and football. Others used the national holiday to give thanks alongside strangers at outdoor Occupy encampments, serving turkey or donating their time in solidarity with the anti-Wall Street movement that has gripped a nation consumed by economic despair.

In San Francisco, 400 occupiers at a plaza in the financial district were served traditional Thanksgiving fixings sent by the renowned Glide Memorial Church to volunteers and supporters of the movement fighting social and economic inequality.

"We are thankful that we are, first and foremost, in a country where we can protest," said the Rev. Cecil Williams, the founder of Glide and a fixture in the city's activist community. "And we are thankful that we believe that there are things that could be worked out and that we have a sense of hope. But we know that hope only comes when you make a stand."

Across the bay in Oakland, where protesters and police previously clashed when an Occupy encampment was broken up, occupiers enjoyed a Thanksgiving feast outside City Hall with music and activist speakers, including Clyde Bellecourt, co-founder of the Minnesota-based American Indian Movement.

And in New York, in an amplified version of a family Thanksgiving squabble, shouting erupted Thursday when police ordered a halt to protesters' drumming at an otherwise mostly traditional Occupy Wall Street holiday meal.

About 500 protesters were digging into donated turkey and all the trimmings when police told a drummer at lower Manhattan's Zuccotti Park to stop playing. Things heated up for about 15 minutes.

About 200 of the protesters surrounded a group of about 30 officers and began shouting.

"Why don't you stop being cops for Thanksgiving?" yelled one protester.

"Why don't you arrest the drummers in the Thanksgiving parade?" hollered another.

A van rolled up with more officers, but they hung back. The protesters, part of anti-Wall Street movement that has gripped a nation consumed by economic despair, held an impromptu forum and decided to call off the drumming.

Occupy organizers distributed Thanksgiving meals at Zuccotti Park, where the protest movement began on Sept. 17 before spreading nationwide. Protesters were evicted from the park on Nov. 15.

"So many people have given up so much to come and be a part of the movement because there is really that much dire need for community," said Megan Hayes, a chef and organizer with the Occupy Wall Street Kitchen in New York. "We decided to take this holiday opportunity to provide just that -- community."

She said some 3,000 meals were distributed.

The movement's slogan, "We are the 99," refers to the growing wealth gap between the wealthiest 1 percent of Americans and the remaining 99.

The movement was triggered by the high rate of unemployment and foreclosures, as well as the growing perception that big banks and corporations are not paying their fair share of taxes, yet are taking in huge bonuses while most Americans have seen their incomes drop.

In New York, restaurants and individual donors had prepared more than 3,000 meals for the traditional Thanksgiving feast, said Haywood Carey, 28, who was volunteering his time serving meals and said the celebration was a sign of Americans' shared values.

"The things that divide are much less than the things that bind us together," Carey said, as the crowd ate to the old spiritual anthem, "Let it Shine" by a guitarist and a bongo player.

In San Diego, four Occupy protesters were arrested between midnight and 2 a.m. Thursday at an encampment at the City's Civic Center Plaza, said Officer David Stafford. Three were taken into custody for sleeping overnight in public, while the fourth was arrested for spitting on an officer, Stafford said.

In Minnesota, a retired Plymouth woman is one of several chefs who provided a home-cooked Thanksgiving meal for anti-Wall Street protesters in Minneapolis.

Seventy-year-old Linda Thomson says she had no Thanksgiving plans and was thinking of a way to make the holiday meaningful. She says she and several friends decided to cook a meal for any protesters at the downtown plaza where demonstrations have been ongoing since Oct. 7.

She told The Associated Press by telephone Thursday she brought enough turkey and fixings to serve about 25 people, and others brought food too. She says about 50 protesters have been fed.

Thomson says she wants to honor the young people who have braved cold Minnesota weather for an important principle. She says she shares their opposition to corporate greed.

In Las Vegas, Occupy protesters had a potluck meal at their campsite near the University of Nevada, Las Vegas. Organizer Sebring Frehner said he was happy to skip his traditional meal at home.

"Instead of hunkering down with five or six close individuals in your home, people you probably see all of the time anyway, you are celebrating Thanksgiving with many different families -- kind of like the original Thanksgiving," Frehner said.

Trisha Carr, 35, spent her holiday at the Occupy encampment at City Hall in Philadelphia. She has been out of work for more than two years and lost her car and home. She's been living in an Occupy tent for several weeks.

"Some days are harder than others," Carr said.

The sunny, crisp weather Thursday put her in a good mood, and she watched the annual Thanksgiving parade before coming back to the encampment for a plate full of turkey and fixings.

Carr said her job search has been fruitless, and government needs to do more to help people like her.

"I had the benefits, I had money in my pocket, I had health care -- I had it all," Carr said. She later added: "There should be no reason why people aren't working."