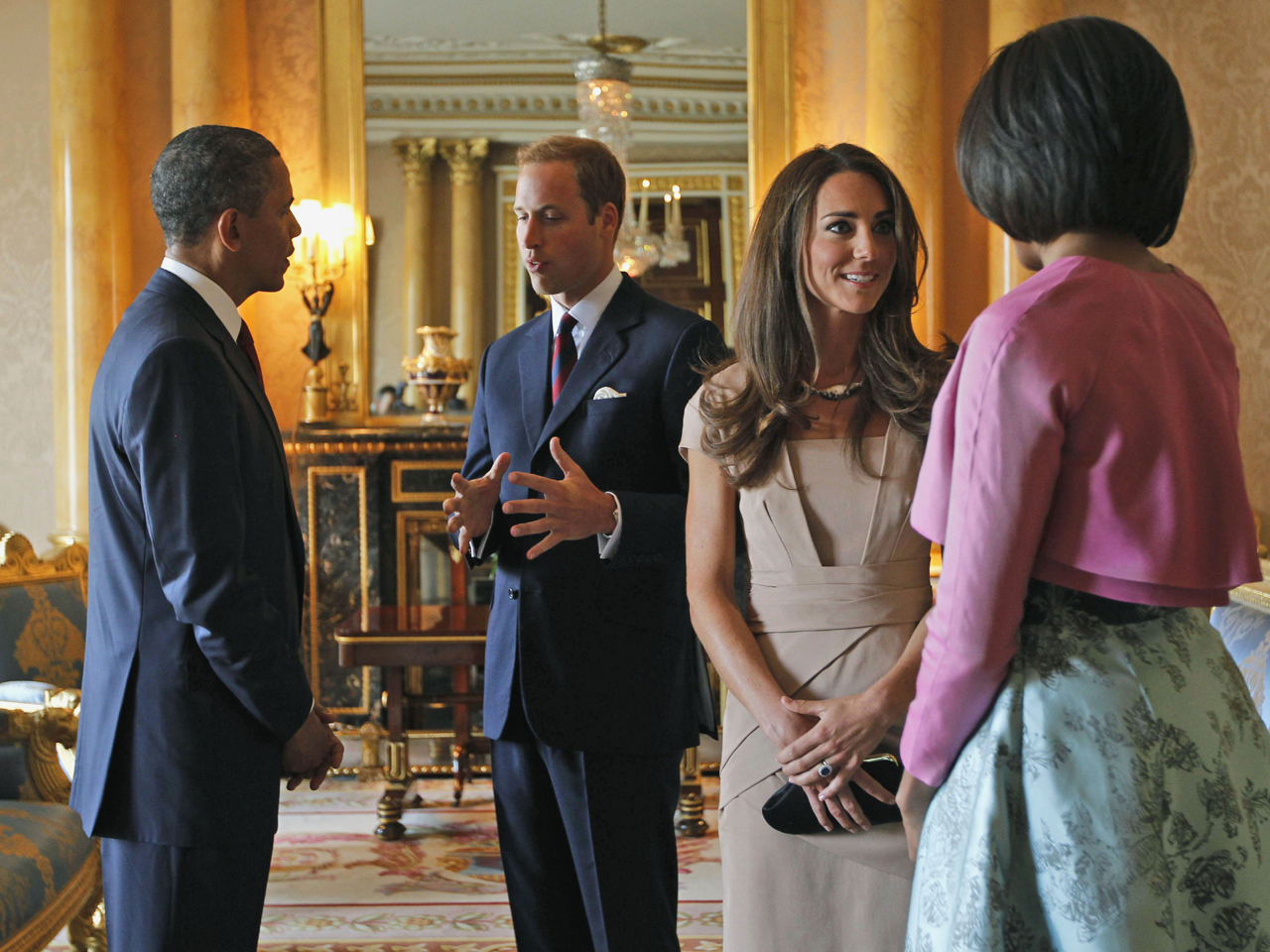 LONDON - President Barack Obama and wife Michelle Obama were welcomed to Buckingham Palace in grand royal style Tuesday by Queen Elizabeth II as they began their official state visit to Britain, a rare honor for a U.S. president.

The queen and her husband Prince Philip greeted the Obamas at the majestic palace on a sunny, windy afternoon in London. Following a private tour, the two couples emerged on the ceremonial steps of the West Terrace for a 41-gun salute.

The queen, dressed in a powder blue suit and matching hat, stood with the president, as ranks of Scots Guards in red jackets and tall hats played the Star-Spangled Banner in honor of the American president and his wife.

A longer 62-gun salute at the Tower of London could be heard throughout the city, heralding the Obamas' arrival.

While Mr. Obama will tackle prickly foreign policy matters in the coming days, the opening rounds of his four-country European tour were all about the personal politics that made him so beloved on this continent as a presidential candidate and in the early days of his term in office.

In Ireland Monday, Mr. Obama embraced the touch of Irish in his family history, drinking a pint of Guinness with a distant cousin in the hamlet of Moneygall and delivering a rousing speech on the ties between the U.S. and Ireland before tens of thousands crammed into the center of Dublin.

In London, the Obamas were fully embracing the tradition and history of the royal family, which is experiencing a resurgence in popularity following Prince William's wedding.

The Obamas were to spend two nights at the palace as guests of the queen, staying in a six-room suite last used by Prince William and Kate Middleton on their wedding night. The newlyweds, now known as the Duke and Duchess of Cambridge, met briefly with the Obamas Tuesday before the palace arrival ceremony.

A palace official said the queen was closely involved and interested in the planning of this state visit, a grand display of royal pageantry that only happens about twice a year for a world leader of the queen's choosing.

Obama's visit is only the second official state visit by a U.S. president, according to Buckingham Palace. Although most previous presidents have visited England and met the queen, a number of features are required by British protocol in order for the trip to be considered a state visit. George W. Bush was also accorded a state visit.

The president and first lady began the day greeted by Prince Charles and his wife Camilla at Winfield House, the stately mansion in Regent's Park that is the residence of the U.S. ambassador. The Obamas stayed there Monday night after leaving Ireland early instead of spending the night in Dublin because of safety concerns over a volcanic ash cloud being blown toward Britain from Iceland.

There was no avoiding domestic issues, either. From Europe Obama was monitoring fallout from the massive tornado that struck Missouri, and before meeting the queen Tuesday he announced plans to tour the damage on Sunday after he returns to the states.

Royal watchers say the queen has taken a liking to the Obamas ever since meeting the couple during their 2009 visit to London. Mrs. Obama created a stir in Britain when she wrapped her arm around the queen — a faux pas, according to royal etiquette experts — only to have the queen respond with her own show of affection and a reciprocal embrace.

The Obamas had plenty of quality time with the queen Tuesday, including when she gave them a post-lunch tour of the Buckingham Palace art collection, pointing out various items as the president and first lady looked on with interest.

The president stopped in front of a page from King George III's personal journal, dated sometime around 1783, not long after America won its independence. "America is lost!" the king had written, before meditating on the possibilities of "a future friendship and connection."

Mr. Obama also looked at a photograph of the HMS Resolute, the ship whose timbers were used in the 19th century to build a desk presented by Queen Victoria to America. The desk has been used by most presidents since then, including Mr. Obama, in the Oval Office. "That's my desk!" the president could be heard to exclaim.

As is customary, there was an exchange of gifts: From the Obamas to the queen, a collection of memorabilia and photographs from her parents' 1939 visit to the United States, and from the queen to the Obamas a selection of letters from the royal archives to and from past U.S. presidents and English monarchs. Mrs. Obama also received an antique brooch made of gold and red coral in the form of roses.

Mr. Obama was to meet briefly with British Prime Minister David Cameron on Tuesday, though their most substantial talks will come the following day, when Afghanistan, Libya and the global economy are all on the agenda.

Mr. Obama's mission, in part, is to reassure Britain and the rest of Europe that the traditional U.S. allies still have a central role in a U.S. foreign policy that has become increasingly focused on Asia and other emerging markets.

In a joint editorial for Tuesday's edition of the British newspaper The Times of London, Mr. Obama and Cameron cast the relationship between the U.S. and Britain as one that makes the world more secure and more prosperous.

"That is the key to our relationship. Yes, it is founded on a deep emotional connection, by sentiment and ties of people and culture. But the reason it thrives, the reason why this is such a natural partnership, is because it advances our common interests and shared values," the leaders wrote.

Still, the two allies don't always agree on every issue, a reality sure to expose itself in talks on national security and foreign policy. When it comes to the NATO-led bombing campaign in Libya, for example, some British lawmakers have expressed concern that European countries, including Britain, have carried an unfair share of the burden of a mission the U.S. has made clear it does not want to run.

After his two-day stop in Britain, Mr. Obama will head to France for a meeting of the Group of Eight industrialized nations and then to Poland, a schedule the White House says the president intends to keep despite the approaching ash cloud.

Mr. Obama tried to get to Poland last year for the funeral of the country's president. But that trip with canceled because of an ash cloud from a different Icelandic volcano.