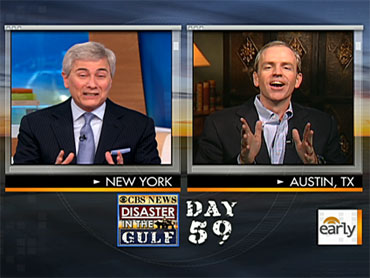 President Barack Obama responded far too slowly to the oil spill disaster in the Gulf of Mexico and his political clout has already suffered, a Democratic and Republican strategist said Thursday.

"What you're seeing is the White House scrambling to try to get ahead of a story," Republican strategist Dan Bartlett, a former counselor for President George W. Bush, said on CBS' The Early Show. "Several weeks ago is when they should have given this speech to the American people."

"We saw the president yesterday seize control of this issue and take the leadership that, granted, should have happened weeks ago and now it's begun," Zimmerman said. "The real test will be how aggressively the administration follows up."

Both Bartlett and Zimmerman gave the president a C/C- grade on how he is doing from a political standpoint with the Gulf oil spill disaster.

"When you're in the White House and you're president, you really want to be shaping public opinion, not responding to public opinion," Bartlett said.

Both strategists noted that the president is leveraging the crisis to open a larger policy debate. Zimmerman said putting an aggressive energy police in place was the only was to stop a similar tragedy from happening again.

But Bartlett questioned the timing of the debate.

"There's time and place for policy debate," he said. "The politics are not where they should be for this president to try to push a controversial energy package, like he's attempting to do."

Watch Bartlett and Zimmerman Below: