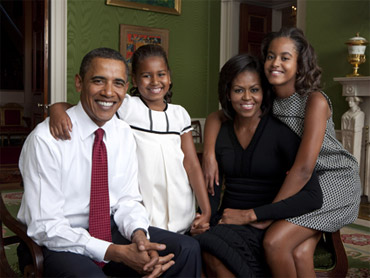 He may be the world's foremost mixed-race leader, but when it came to the official government head count, President Barack Obama gave only one answer to the question about his ethnic background: African-American.

The White House confirmed on Friday that Obama did not check multiple boxes on his U.S. Census form, or choose the option that allows him to elaborate on his racial heritage. He ticked the box that says "Black, African Am., or Negro."

Obama filled out the form on Monday, supplying information for himself, first lady Michelle Obama and their daughters Malia and Sasha, as well as for Mrs. Obama's mother, Marian Robinson, who lives with the family in the White House.

For Obama, whose mother Ann Dunham, a white woman from Kansas, married his father, the Kenyan native Barack Obama Sr., the question of his racial identity has been a lifelong struggle. His first memoir, "Dreams From My Father," is an account of a difficult journey of discovery.

Obama the community activist and then politician always self-identified as African-American, and he now wears the mantle of America's first black president with pride. On a visit to Ghana last year, he took his wife and daughters to see Gold Coast Castle, the one-time slave trading depot from which thousands of Africans were sent in shackles to a life of toil in the New World. Mrs. Obama is descended from a South Carolina slave.

The president's multiracial heritage has been a subject for oceans of commentary in America and around the world. But it's also been a cause for teasing, and even satire.

"The first black president!" exclaimed comedian Wanda Sykes at a dinner last year of the White House Correspondents' Association. "I'm proud to be able to say that. That's unless you screw up. And then it's going to be, 'What's up with the half-white guy?"'