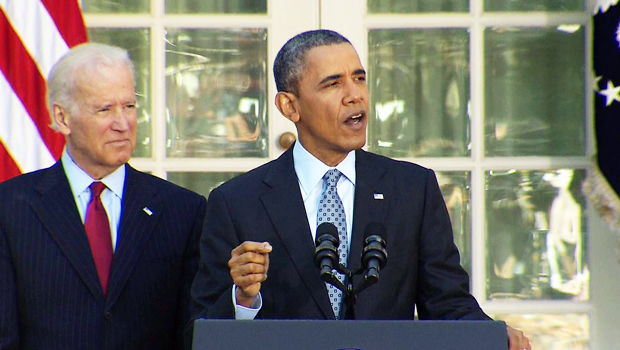 Before open enrollment closed at midnight Monday night, 7.1 million signed up for private insurance coverage via the Obamacare marketplaces, President Obama announced Tuesday from the White House Rose Garden, with Vice President Joe Biden by his side.

The president the milestone moment to declare that, in spite of split public opinion and continued Republican opposition, the law is without question a good thing for the nation.

"Under this law the share of Americans with insurance is up, and the growth of health care costs is down. And that's good for our middle class, and that's good for our fiscal future," he said. "All told, because of this law millions of our citizens know the economic security of health insurance who didn't just a few years ago, and that's something to be proud of, regardless of your politics or your feelings about me."

The administration managed to meet its initial enrollment goals after a "remarkable surge" on HealthCare.gov in the final days of the six-month open enrollment period, White House spokesman Jay Carney explained earlier. On Monday alone, more than 200,000 people signed up on HealthCare.gov, the site that serves as the portal to Obamacare for 36 states.

After HealthCare.gov's disastrous launch in October, it seemed highly unlikely that the administration would enroll 7 million Americans in private insurance through the new marketplaces, as it aimed to do. Carney noted Tuesday that doubts about the central component of the Affordable Care Act predate the website problems.

"I have seen people say meaningful health care reform could not be done more times than I could count," he said.

He also noted the Republican Party's stalwart opposition to the program, from its inception through the ongoing midterm campaigns. "Republicans have spent millions on false ads, they've blocked Medicaid expansion in dozens of states... they've shut down the government," he said. "That effort could not stop this law from working."

Senate Minority Leader Mitch McConnell, R-Ky., on Tuesday maintained that the Affordable Care Act is a "catastrophe for the country."

"What we do know is that all across the country our constituents are having an unpleasant interaction with Obamacare," he told reporters. "Whether they can sign up for a policy or not, what they are discovering is higher premiums [and] higher deductibles."

Mr. Obama on Tuesday scolded Republicans for their continued opposition.

"Why are folks working so hard for people not to have health insurance?" he asked. "Many of the tall tales that have been told about this law have been debunked -- there are still no death panels, armageddon has not arrived.

The president also put the debate in a historical context, remarking, "In the end, history is not kind to those who would deny Americans their basic economic security."

Mr. Obama did acknowledge that "the law's not perfect."

"We've had to make adjustments along the way... and yes, at times this reform has been contentious and confusing, and obviously it's had its share of critics," he said. "That's what change looks like in a democracy. Change is hard... but this law is doing what it's supposed to do."

The president also predicted more challenges in implementing the law. However, he said, "If we can stop refighting old political battles that keep us gridlocked, we can actually make the law work better for everybody."

Democratic leaders in Congress similarly hailed the law's success while acknowledging it is not perfect.

"This is a big bill, and if we had working partners as we used to with Republicans, there are other things we could do to work on this," Senate Majority Leader Harry Reid, D-Nev., said of the law. "But [Republicans] have been determined to do nothing"

House Minority Leader Nancy Pelosi, D-Calif., similarly chastised the continued Republican opposition to the law. She said Democrats were committed to the ACA's principles even as the law faltered and will stay committed to them, even through the election season.

"While the website didn't work [initially], the principles of the legislation were very, very important and we're wedded to them as we go forward," she said.
View CBS News In
CBS News App Open
Chrome Safari Continue
Be the first to know
Get browser notifications for breaking news, live events, and exclusive reporting.