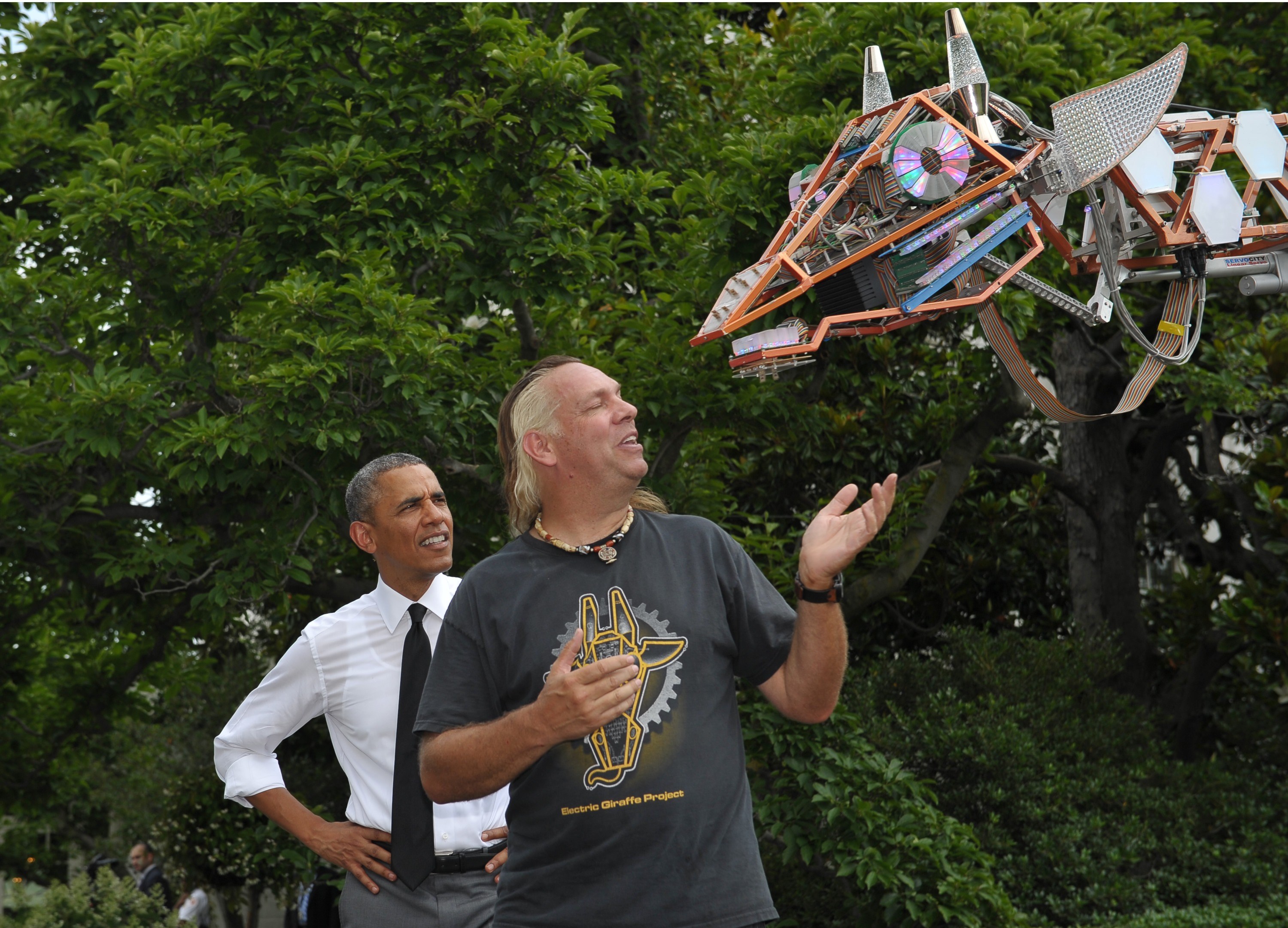 If President Obama is mingling with inventors, sooner or later there has to be a robot. On Wednesday, it was Russell, the 17-foot electric giraffe towering in the South Lawn of the White House, a symbol of the quirky and clever creations Obama wanted to showcase on a day devoted to innovation.

"New tools and technologies are making the building of things easier than ever," Obama told entrepreneurs and students who gathered at the White House at its first "Maker Faire." "There is a democratization of manufacturing that is potentially available because of technology."

As part of a weekslong emphasis on the economy, Obama was promoting the use of new tools and techniques to start up new businesses, to boost manufacturing and to strengthen science and math education.

"We've got to make sure that more Americans have the skills and opportunities to land a job in a growing industry or to create entire new industries," he said. "That's why I'm declaring today a national day of making."

Obama spoke after wandering outside from exhibit to exhibit on a sweltering day at the White House.

Besides the giant giraffe, a huge red weather balloon hovered over the Rose Garden and a menacing dinosaur head rested in a hallway.

A Philadelphia nonprofit group demonstrated a fuel-efficient car. Another showed off a solar energy unit.

"What on earth have you done to my house?" Obama joked.

Obama always seems engrossed by technological innovations, though he joked about the name "Maker Faire" as a gathering for new and creative products.

More than 100 "makers" from 25 states were at the White House as Obama focused on helping fledgling businesses create and market their products. Obama was in Pittsburgh on Tuesday pledging to make expanding manufacturing a priority for his remaining years in office.

The White House says 13 federal agencies are teaming up with companies like Etsy and Kickstarter to help Americans access startup capital and tools to develop new products.

"Today's 'DIY' is tomorrow's 'Made in America,'" the president said, noting that Steve Wozniak designed the Apple 1 computer in the 1970's to show off to the Homebrew Computer Club, a computer hobbyist group.

"I'd like to think I would've said that's a good idea," Obama said to laughter. "While I don't know if the projects here today are the next Apple, I do know by looking at some of these exhibits it's incredible what's being done."