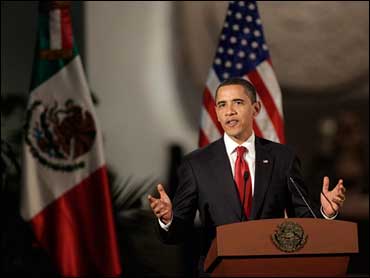 President Barack Obama's health is fine a little more than a week after he traveled to Mexico, where an outbreak of swine flu has killed at least 68 people and sickened more than 1,000, the White House said Saturday.

"The president's trip to Mexico has not put his health in any danger," said spokesman Robert Gibbs.

The World Health Organization's director-general, Margaret Chan, said the outbreak of the never-before-seen virus is a very serious situation and has "pandemic potential." Obama was in Mexico last week to meet with top government officials and talk about the growing problem with drug smuggling and border violence.

Obama is being updated on the swine flu outbreak in Mexico, with the Homeland Security Council monitoring the situation along with the State Department and the Centers for Disease Control and Prevention.

The disease has already reached Texas and California and on Saturday, New York officials said eight students probably have swine flu. With 24 new suspected cases reported Saturday in Mexico City alone, schools were closed and all public events suspended in the capital until further notice - including more than 500 concerts and other gatherings in the metropolis of 20 million.

The outbreak coincided with President Barack Obama's trip to Mexico City on April 16. Obama was received at the anthropology museum in Mexico City by Felipe Solis, a distinguished archaeologist who died a week later from symptoms similar to flu, Reforma newspaper reported. The newspaper didn't say if Solis had swine flu or not.