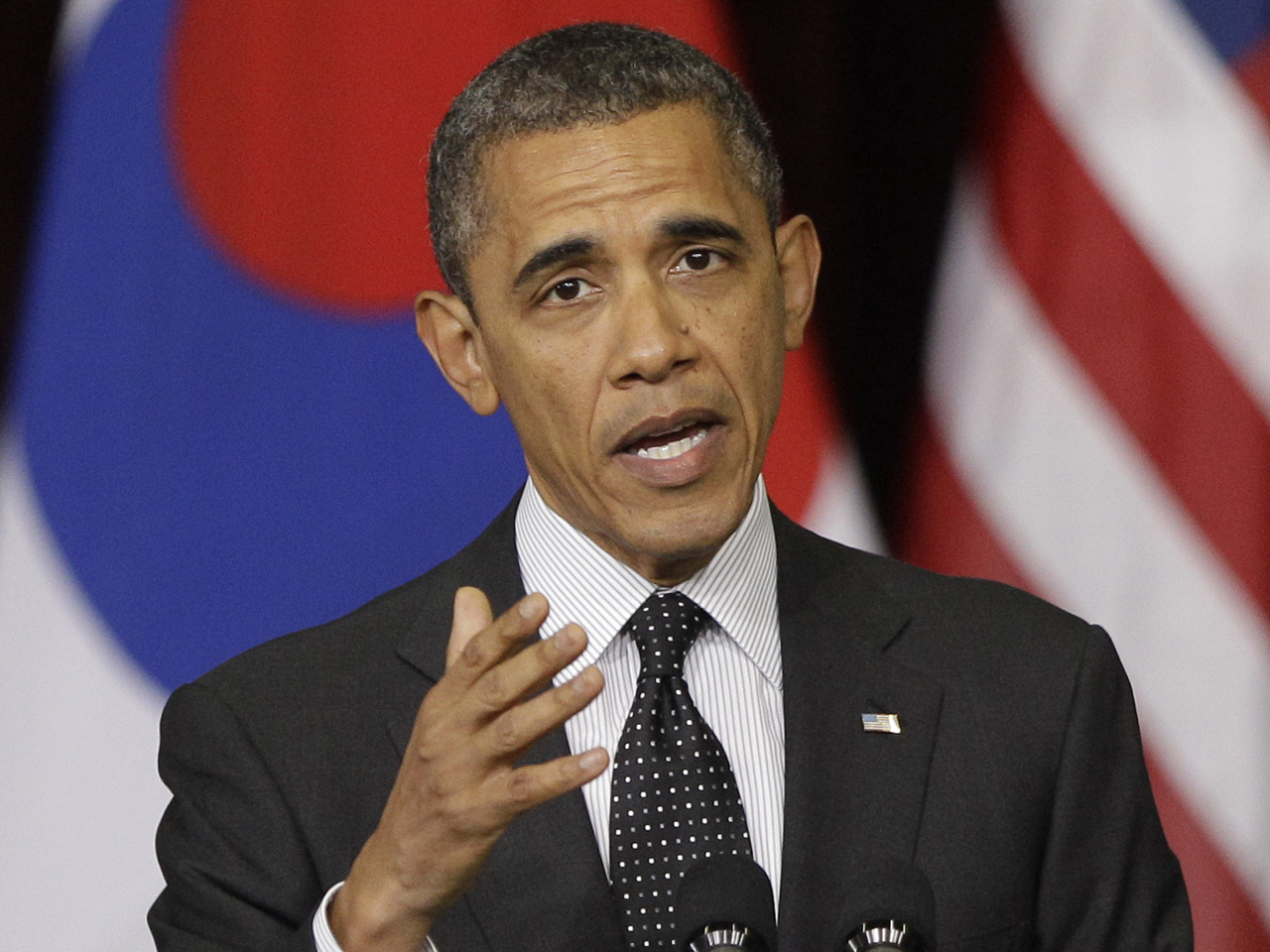 (CBS/AP) SEOUL, South Korea - President Obama warned North Korea and Iran on Monday that their options are few, and their friends fewer, as those nations refuse to back down from actions the world sees as menacing.

"By now it should be clear," Mr. Obama said, addressing North Korea from the South Korean capital only about 30 miles away. "Your provocations and pursuit of nuclear weapons have not achieved the security you seek, they have undermined it. Instead of the dignity you desire, you are more isolated."

As he spoke, his South Korean hosts warned they might shoot down parts of a North Korean rocket if they fell over South Korean territory, as worries about what Washington calls a long-range missile test overshadowed an international nuclear security summit. The summit of more than 50 nations opened with a dinner Monday.

The threat posed by nearby nuclear-equipped North Korea also loomed large over Mr. Obama's meeting on the sidelines of the summit Monday with the president of China, Pyongyang's main ally.

However, Rhodes was cautious about whether China's words would really lead to Beijing taking a tougher stand against North Korea.

"China has expressed those concerns before and North Korea has continued on with its behavior," Rhodes said. "Therefore, China needs to look at whether it needs to be doing more above and beyond the types of messages and warnings it's been giving to the North Koreans."

Mr. Obama himself said the same a day earlier, in an unusually direct criticism of China.

The United States maintains that the launch, which Pyongyang says will happen next month, would amount to a test of North Korea's long-range rocketry

News of the planned launch dominated the diplomatic talk in Seoul, where world leaders are gathered to discuss steps to reduce the threat of nuclear material.

In his remarks Monday, Mr. Obama declared flatly that the United States has more nuclear weapons than it needs and can cut its arsenal without weakening its security or that of its allies. He pledged to keep trying to rid the world of nuclear weapons despite disagreements with Russia over the next phase of a largely successful disarmament program he sees as a hallmark of his presidency.

He also faces long if not impossible odds of winning Republican assent to new reductions in the US arsenal.

Russian President Dmitry Medvedev noted as much, telling Mr. Obama at what will be their last meeting that progress on hard political issues is difficult "in an election year."

In a conversation caught on an open mic, Mr. Obama told Medvedev he would have more flexibility after the November election to deal with the contentious issue of missile defense.

(Watch at left a "CBS This Morning" report on Mr. Obama's comments)

In his public remarks, in unusually personal terms, Mr. Obama said he spoke of his wish for further nuclear reductions as the president of the only nation ever to use nuclear weapons, as a commander whose country's nuclear codes are never far from his side, and as a protective father eager to erase the threat of nuclear annihilation.

Mr. Obama aimed his most stern remarks to North Korea's leaders, saying the internationally isolated country needs to change its ways because continuing down the same path will lead to "more broken dreams" and "more isolation." His blunt remarks came a day after he visited the Demilitarized Zone between North and South Korea and described the experience as akin to witnessing a "time warp" of despair.

"Even as we have more work to do, we can already say with confidence that we have more nuclear weapons than we need," he said. "I firmly believe that we can ensure the security of the United States and our allies, maintain a strong deterrent against any threat, and still pursue further reductions in our nuclear arsenal."

Mr. Obama also reiterated his warning to Iran, which the U.S. and its allies contend is defying its international obligations by pursuing an illicit nuclear program.

"Iran's leaders must understand that there is no escaping the choice before it. Iran must act with the seriousness and sense of urgency that this moment demands," Mr. Obama said. "Iran must meet its obligations."

Facing down Iran and North Korea, Mr. Obama said a "new international norm" was emerging to deal with the two nations' intransigence. "Treaties are binding. Rules will be enforced. And violations will have consequences," Mr. Obama said. "Because we refuse to consign ourselves to a future where more and more regimes possess the world's most deadly weapons."

Mr. Obama said the U.S. was also moving forward with Russia to eliminate enough plutonium for about 17,000 nuclear weapons and turn it into electricity. And he heralded an earlier agreement with Russia to reduce nuclear arsenals under the New START Treaty, which Mr. Obama called "the most comprehensive arms control agreement in nearly two decades."

"When we're done, we'll have cut American and Russian deployed nuclear warheads to their lowest levels since the 1950s," he said.

Mr. Obama also prodded Russia in a new way, saying he would seek discussions with Moscow on an unprecedented front: reducing not only strategic nuclear warheads, but also tactical weapons and warheads in reserve. He said he planned to discuss that proposition with former leader Vladimir Putin, who will return to the presidency later this spring after winning an election held earlier this year, when they meet in May.

After his meeting with Medvedev, Mr. Obama said the U.S. and Russia have "more work to do" to bridge their differences, including their approach to violence in Syria. The U.S. has sharply criticized Russia for opposing U.N. Security Council action calling on Syria's president to leave power.

Despite their differences, Medvedev says the relationship between the U.S. and Russia has reached its "best level".