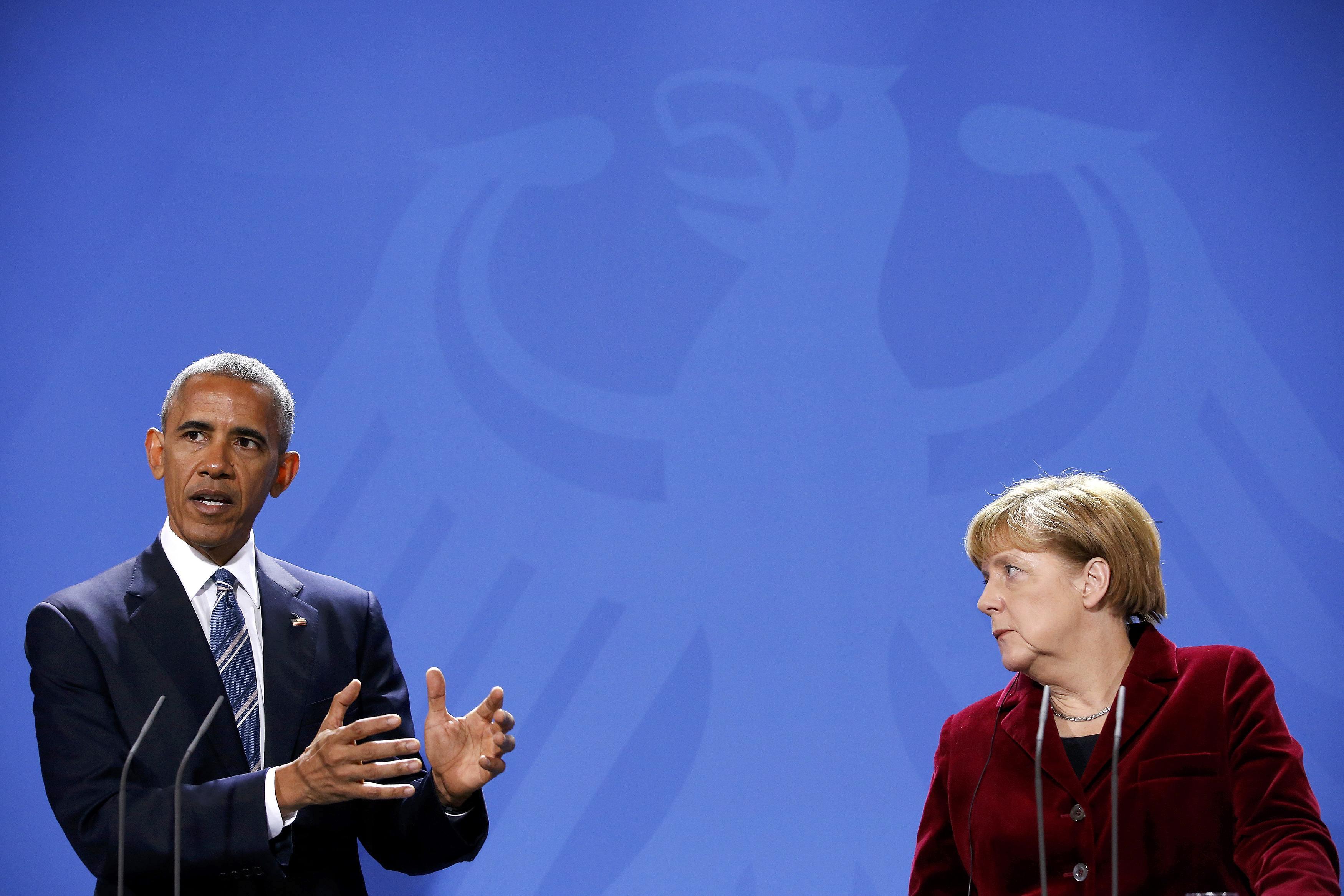 President Obama on Thursday warned Donald Trump that he should be willing to stand up to Russia as president, and he talked about his expectations for the president-elect’s actions concerning key U.S. policies and international commitments.

Speaking from Berlin at a joint news conference with German Chancellor Angela Merkel during his final trip abroad as president, Mr. Obama said that while he doesn’t expect Trump to follow his administration’s blueprint, he expects him to act in U.S. interests.

The president suggested it would be harmful if Trump takes a “realpolitik approach” where the U.S. cuts deals with Russia “even if it hurts people, or even if it violates international norms or even if it leaves countries vulnerable.”

Mr. Obama reiterated that he was “encouraged” by Trump’s “insistence” he won’t change the U.S. commitment to NATO, which the president said Trump made clear to him during a 90-minute meeting at the White House last week.

“His full commitment to NATO as the foundation for our international security is, I think, very important,” Mr. Obama said.

Mr. Obama is on his last foreign trip, which also includes stops in Greece and Peru. While both leaders met privately, Mr. Obama said they discussed efforts to keep the U.S. and Germany economically competitive, negotiations resulting from Brexit -- the United Kingdom’s decision to leave the European Union, the threat of climate change and implementing the Paris agreement, ensuring Iran continues to abide by its nuclear deal, countering cyber threats and the importance of maintaining sanctions against Russia.

Responding to Trump’s previous remarks about stopping the flow of Syrian refugees to the U.S., Mr. Obama said that the global refugee problem is not an issue any one country should bear, and said he hopes robust support for an international response “continues beyond my administration.”

The president warned that “politics everywhere” will now experience a “bumpy phase.”

“As long as we stay true to our democratic principles, as long as elections have integrity, as along as we respect freedom of speech, freedom of religion, as long as there are checks and balances in our governments so that the people have the ability to not just make judgments about how well the government is serving them, but changing government if the government is not serving them well, then I have confidence that over the long-term, progress will continue,” the president said during his sixth visit to Germany.

In what appeared to be a reflection of Democrats’ failure to connect with every demographic in the presidential election, Mr. Obama said, “It’s important that we reach out to everybody in our countries -- those who feel disaffected, those who feel left behind by globalization and address their concerns in constructive ways, as opposed to more destructive ways.”

He talked about the danger of presenting stories that aren’t true in the age of social media, as well as the problemsof using social networks in politics.

“It’s easier to make negative attacks and simplistic slogans than it is to communications complex policies,” he said.

In the end, he said he’s “cautiously optimistic” about his successor.

“There something about the solemn responsibilities of that office, the extraordinary demands that are placed on the U.S., not just by its own people, but by people around the world that forces you to focus, that demands seriousness,” he said.

“If you’re not serious about the job, then you probably won’t be there very long because it will expose problems even when you’re doing a good job.”