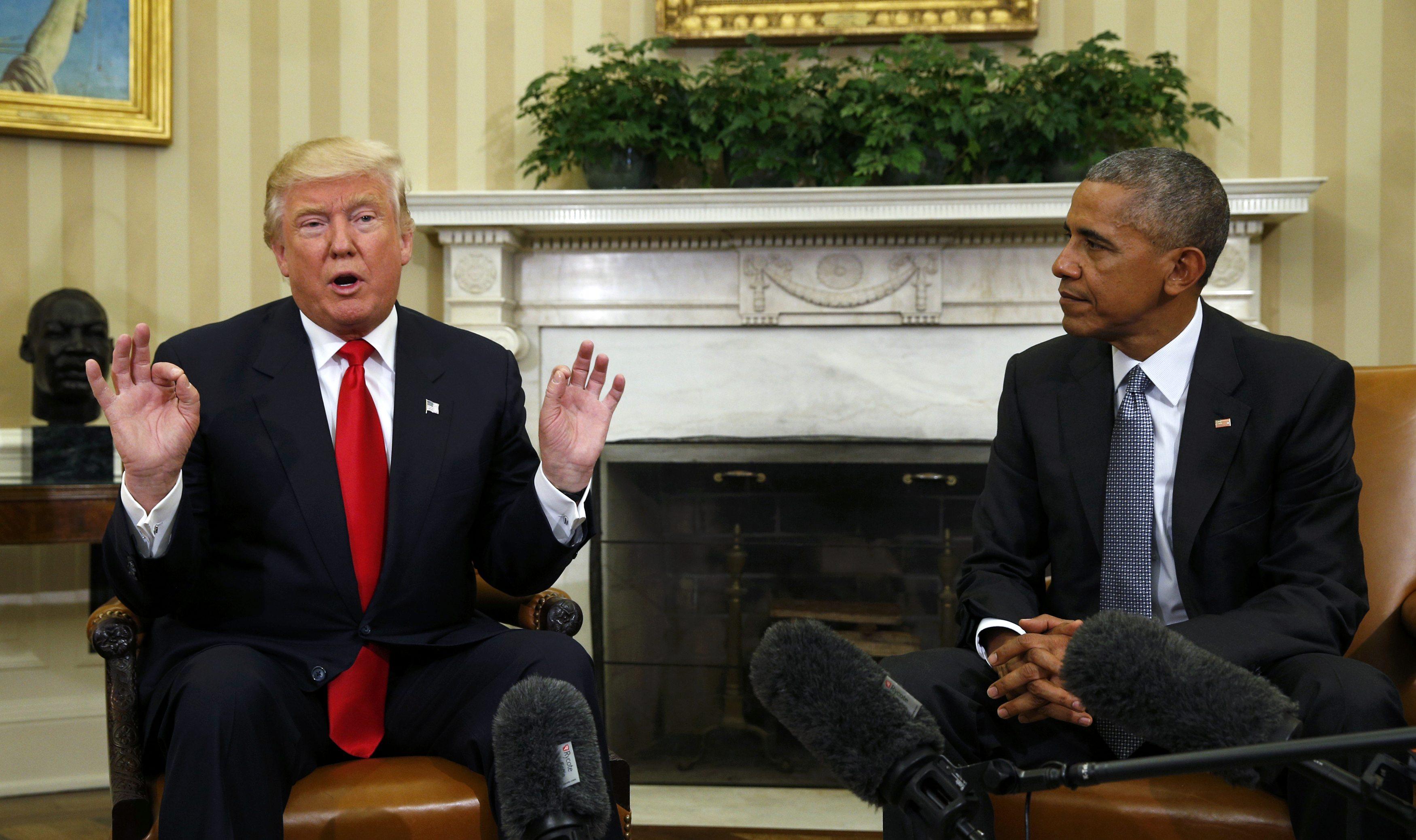 On Wednesday, President Obama pledged to help with a smooth transfer of power, echoing Donald Trump’s election night call for Americans to unite after the divisive election. In Trump’s meeting with GOP congressional leaders, given that Republicans control the House and Senate, there will likely be big-ticket items on the list, reports CBS News correspondent Major Garrett.

While both the president and president-elect have been gracious since the election, it is hard to forget some of the things they said about each other during the course of the campaign.

“If his closest advisers don’t trust him to tweet, why would any of us trust him with the nuclear codes,” Mr. Obama said during a Philadelphia rally. And Trump has said of the president that he “is essentially incompetent,” and he spent  months before and during the 2012 presidential campaign questioning whether Mr. Obama was born in the U.S.

Follow along with our live-blog of his first transition meetings:

When Trump was asked about his legislative priorities, he said, “Well, we have a lot.  We’re going to look very strongly at immigration.”

“We are going to look very strongly at healthcare,” he added, “and we’re looking at jobs, big league jobs.”

2:38: p.m. ET Pence leaves the Capitol on his own to meet with Vice President Joe Biden at the White House.

2:14 p.m. ET A man was detained by Capitol Hill Police in front of the Capitol Hill Club, according to pool reports. The individual was yelling at people who were hanging around to see Trump, who lunched there with House Speaker Paul Ryan.

Police reportedly told the man to quiet down but he refused, saying he had a right to yell at Trump supporters, and they started to detain him. The man appeared to cooperate, though he was still speaking as they put him in a van.

2:01 p.m. ET House Speaker Paul Ryan appeared with Trump and vice president-elect Mike Pence in front of reporters at a conference room in the Capitol. Trump’s wife, Melania, sat next to her husband.

Ryan commended Trump for “one of the most impressive” election victories “I’ve ever seen.”

He added that he was “excited” about the opportunity to work with Trump.

“I think we’re going to do some absolutely spectacular things for the American people,” Trump told reporters. “We can’t get started fast enough, whether it’s healthcare or immigration -- so many different things.”

Trump called the gathering a “very good meeting, a very detailed meeting,” and mentioned some policies on his agenda, including lowering taxes, and making health care more affordable.

Ryan then took the president-elect and his wife out on the House Speaker’s balcony of the Capitol building to show off the view. Ryan pointed out to Trump where he will be inaugurated.

As Trump and Pence walked by reporters, Trump said the balcony tour was “really beautiful.”

1:30 p.m. ET President Obama and President-Elect Trump met alone in the Oval Office for 90 minutes, White House Press Secretary Josh Earnest told reporters shortly after the two met. There was no staff in the room with Mr. Obama and Mr. Trump. And their meeting, Earnest said, was “at least a little less awkward than some might have expected.”

During the meeting, Mr. Obama talked about his upcoming trip abroad, to Greece, Germany and Peru -- his final foreign trip as president -- and he described for Mr. Trump some of the issues he expects to come up with other world leaders, Earnest said. The two spent a large part of the meeting talking about staffing and organizing the White House. “That’s complicated business,” Earnest said. It must be structured to deal with multiple crises simultaneously.

12:59 p.m. ET Trump flashed a thumbs-up from his car as he arrived at the Capitol Hill club for his meeting with House Speaker Paul Ryan. Vice President-elect Mike Pence arrived earlier.

Mr. Obama called it an “excellent meeting” and said he was encouraged by the Trump transition team’s interest in working with the White House.

“President Trump’s wanting to work with my team around the many issues this great country faces,” Mr. Obama said. “It is important for all of us, regardless of party... to now come together, work together to deal with the many challenges we face.”

He added of the first lady: “Michelle has had a chance to greet the incoming first lady... we want to make sure that they feel welcome...We now are gonna want to do everything we can to help you succeed.”

Trump also gave remarks to the press, saying he has “great respect” for his predecessor and calling him a “good man.” He added that the two discussed several things -- “some wonderful,” and some not so wonderful.

Turning to Mr. Obama, Trump said, “I look forward to being with you many, many more times.”

The two shook hands after the meeting, which lasted more than 90 minutes.

12:35 p.m. ET Pool cameras were was ushered into the Oval Office for a photo opportunity.

The president and president-elect sat in high-backed armchairs at the end of the room, as is typical for when the President speaks to world leaders.

Both men spoke briefly, according to pool reports.

12:10 p.m. ET Pence’s motorcade arrives at the Capitol Hill Club, where he and Trump are scheduled to meet with House Speaker Paul Ryan.

This afternoon, House Minority Leader Nancy Pelosi took a call from the vice president-elect, according to a statement by a Pelosi aide. Pelosi congratulated him on his win and the two agreed on the need to find common ground. Pelosi and Pence, who had once served in the House as a congressman from Indiana, said that they would also meet face-to-face in the following weeks.

12:07 p.m. ET White House chief of staff Denis McDonough and Trump’s son-in-law Jared Kushner were seen walking back from the lawn and across the Rose Garden, according to pool reports.

McDonough led Kushner, who is part of Trump’s transition team, up the colonnade, followed by the same group of aides who’d left them on their own for the walk. They entered the White House, looked up briefly when a reporter called out “Denis!” but did not respond.

In the afternoon, the president also welcomes the Cleveland Cavaliers to the White House to honor the team and their 2016 NBA Championship.

At 11:00 a.m. ET, President-elect Trump will meet with President Obama in the Oval Office.

At 12:30 p.m. ET, Trump and Pence will meet with House Speaker Paul Ryan, R-Wisconsin, at the Capitol Hill Club.

At 1:30 p.m. ET, Senate Majority Leader Mitch McConnell, R-Kentucky, will host the president elect and vice resident-elect for a meeting in his Capitol office today.