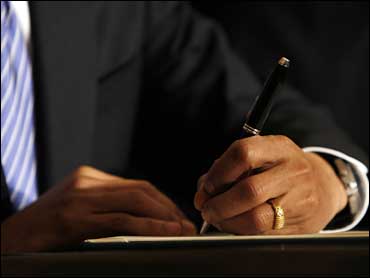 President Barack Obama has ordered a review of his predecessor's so-called signing statements, which often told officials how to implement laws.

When signing legislation, Mr. Bush often would use such statements to direct officials to ignore parts of the law he thought were incorrect or restricted the administration's constitutional powers.

Gibbs said presidents have used such statements to note potential problems and Mr. Obama planned to continue that practice. But Gibbs said Mr. Obama would not use those signing statements to completely disregard Congress' intent.

"There will still be signing statements, but they will be used as sparingly as they were before the previous administration," said CBS News Chief Legal Analyst and Legal Editor Andrew Cohen. (Read his analysis here.)

In a memo to the heads of executive departments and agencies, Mr. Obama said that he knows that the practice of signing statements can be abused.

The memo also outlines intentions that the administration will notify Congress of any constitutional concerns about pending legislation in order to limit the use of signing statements.