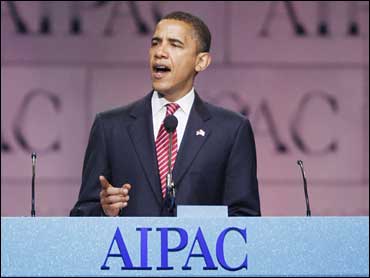 Democratic presidential candidate Barack Obama assured Jewish leaders Wednesday that he will be a steadfast ally of Israel and will not negotiate with terrorist groups, a response to attacks leveled against him recently by Republicans.

Only hours after securing his party's nomination, Obama used a previously scheduled speech to 7,000 pro-Israel activists to try to ease concerns that some Jewish voters have about him and his stance on Middle East matters. He pointedly criticized Sen. John McCain, his GOP opponent this fall, and rebutted claims that he underestimates the threat that Iran poses and would naively enter into unwise talks with U.S. adversaries.

"As president I will never compromise when it comes to Israel's security," Obama told an annual gathering of the American Israel Public Affairs Committee, a major Jewish bipartisan group.

McCain, President Bush and some Democrats have criticized Obama for saying he would talk with leaders of hostile nations such as Iran. At the AIPAC gathering, Obama outlined limits he sees for such negotiations.

"We must isolate Hamas unless and until they renounce terrorism, recognize Israel's right to exist, and abide by past agreements," he said of the Palestinian opposed to Israel. "There is no room at the negotiating table for terrorist organizations."

"Contrary to the claims of some, I have no interest in sitting down with our adversaries just for the sake of talking," Obama said. But if elected, he said, "I would be willing to lead tough and principled diplomacy with the appropriate Iranian leaders at a time and place of my choosing if, and only if it can advance the interests of the United States."

"I will always keep the threat of military action on the table to defend our security and our ally Israel," he said.

When McCain addressed the AIPAC group Tuesday, he ridiculed Obama for suggesting he would sit down with Iranian President Mahmoud Ahmadinejad. McCain such a session would gain little "except an earful of anti-Semitic rants and a worldwide audience for a man who denies one Holocaust and talks before frenzied crowds about starting another."

Obama said Wednesday there is no greater threat to Israel than Iran, which "supports violent extremists" and "pursues a nuclear capability that could spark a dangerous arms race." All those threats were known in 2002, he said, yet the Bush administration "ignored it and instead invaded and occupied Iraq."

He said McCain "refuses to understand or acknowledge the failure of the policy that he would continue. He criticizes my willingness to use strong diplomacy, but offers only an alternate reality one where the war in Iraq has somehow put Iran on its heels. The truth is the opposite."

Obama was followed on stage by Sen. Hillary Rodham Clinton. She did not formally concede the nomination to him but told the audience "he will be a good friend to Israel."

Some Jewish voters are wary of Obama partly because his former pastor praised Black Muslim leader Louis Farrakhan, who has made anti-Semitic remarks. Obama has disavowed the pastor's intemperate remarks and later resigned from that church.

Obama cited e-mails "filled with tall tales and dire warnings about a certain candidate for president," a reference to false accusations that he is a Muslim with a hidden agenda. "Let me know if you see this guy named Barack Obama, because he sounds pretty scary," he said.

Obama also clarified a story about his great uncle, which he has gotten some heat over in the past week, reports CBS News reporter Maria Gavrilovic.

At a Memorial Day event in Las Cruces, New Mexico, Obama told a group of veterans that his great uncle helped liberate Auschwitz. His critics were quick to point out that the story had to be false since it was the Russian Army that liberated the camp. Although Obama's campaign called this a blunder and corrected the story, Obama clarified it head on today.

"My great uncle had been a part of the 89th Infantry Division, the first Americans to reach a Nazi concentration camp. They liberated Ohrdruf, part of Buchenwald, on an April day in 1945," Obama said. "The horrors of that camp go beyond our capacity to imagine."

Obama clearly impressed some in the massive hall.

"He had me in tears, this feeling for an understanding of Israel's predicament," said Leonard Eisenfeld, a Connecticut pediatrician whose son was killed in a Hamas bus bombing in Jerusalem in 1996. He said he respects McCain, but is now more open to Obama, calling him a "good soul" in Yiddish.

But Evelyn Mottsman of Pittsburgh said it "disturbs a lot of people that he thinks diplomacy is possible" with Iran.