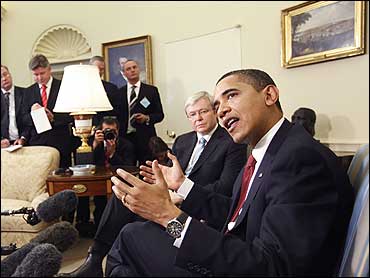 Nearing completion of a revamped strategy in Afghanistan, President Barack Obama said Tuesday the United States will stay on the offensive in its determination to dismantle terrorist operations in the country even as it rethinks its goals in trying to end the 7-year-old war.

The president did not divulge details of his administration's war review, which he said is not yet complete. It is expected to be unveiled as soon as this week.

Speaking to reporters in the Oval Office of the White House, Mr. Obama said the threat of al Qaeda and its terror affiliates has not gone away. As a consequence, he said, "It's important for us to stay on the offensive." Yet he emphasized that the United States, working with its coalition partners, cannot simply win the war militarily.

"My expectations would be that over the next several years, you are going to see a much more comprehensive strategy, a more focused strategy, and a more disciplined strategy to achieve our common goals," Mr. Obama said after meeting with Australian Prime Minister Kevin Rudd.

Rudd, whose country has roughly 1,000 troops in Afghanistan, sounded a similar theme. He said the mission remains to eliminate havens for terrorists.

Mr. Obama has approved an additional 17,000 U.S. troops to go to Afghanistan this year, bolstering 33,000 already there, to counter the Taliban's growing resurgence in recent years in the volatile southern part of the country. He has described that as the most difficult decision of his young presidency.

In the coming days, he is expected to announce his broader rethinking of U.S. strategy and goals in the war, including changed tactics and lowered expectations for the difficult conflict. Top aides to Mr. Obama are recommending that the United States combine a boost in military deployments with a steep increase in civilian experts to combat a growing insurgency in Afghanistan, senior U.S. officials say.

Mr. Obama's top military advisers say the United States is not winning the fight in Afghanistan. The war began in direct response to the Sept. 11, 2001, terror attacks, which were spawned in an Afghanistan then ruled by the Taliban militias.

Mr. Obama said he is aware that the war and its deep sacrifices weigh on the minds of the public.

"But I think that the American and the Australian people also recognize that in order for us to keep our homeland safe, in order to maintain our way of life, in order to ensure order on the international scene, that we can't allow vicious killers to have their way," Mr. Obama said. "And we're going to do what is required to ensure that does not happen."