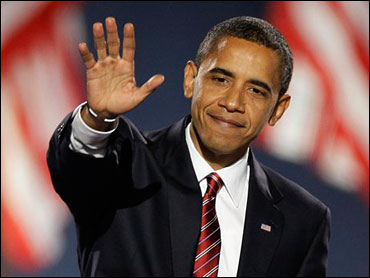 President-elect Barack Obama Wednesday announced that his presidential transition team will be led by John Podesta, who served as chief of staff under President Bill Clinton, campaign advisor Valerie Jarrett, and Pete Rouse, who has been Obama's chief of staff in the Senate.

Though informal transition planning has been going on for months, the creation of the Obama-Biden Transition Project gives Obama and Vice President-elect Joe Biden a formal structure through which to undertake the tasks necessary in transferring power, chief among them helping to select Cabinet members and White House staffers in the new administration.

There have been reports that one decision has already been made: Some news organizations reported Wednesday that Illinois Rep. Rahm Emanuel was offered the position of White House chief of staff. But the Obama camp has indicated that Obama has not formally offered Emanuel the position, and aides to the Democratic Caucus Chair, the fourth-highest ranking Democrat in the House, told CBS News that the reports are wrong.

Not since Franklin Delano Roosevelt won the 1932 election has a president-elect faced so many problems both at home and abroad. Obama has just 76 days until his inauguration.

Ken Duberstein, former chief of staff under Ronald Reagan, told CBS News senior White House Correspondent Bill Plante, "You gotta hit the ground running. You have to be going a hundred miles an hour from day one."

Obama has told aides that he wants to take his time and choose his cabinet carefully. He presently aims to announce his choices after Thanksgiving, CBS News has learned, and does not want to rush the process - or appear to be doing so.

On Thursday, Obama will begin receiving highly-classified daily briefings from top U.S. intelligence officials. He will receive information, mostly written by the Central Intelligence Agency, to which he never before had access, even as a senator.

Biden will also begin to get his own briefings beginning this week.

Despite all this, Obama managed to enjoy a relatively normal day in his hometown of Chicago on Wednesday: Seeing his two young daughters off to school - a simple pleasure he's missed during nearly two years of virtually nonstop travel - and then a workout.

The quieter morning followed an electric night of celebration, anchored by his victory rally of 125,000 in Chicago and joyful outpourings of his supporters across the country.

Though votes are still being counted out west - and there are provisional and absentee ballots outstanding - CBS News is estimating that the final turnout in the 2008 election will be 133 million or more Americans, many of whom endured hours-long waits Tuesday to cast their ballots.

The first African-American destined to sit in the Oval Office, Obama was also the first Democrat to receive more than 50 percent of the popular vote since Jimmy Carter in 1976. He is the first senator elected to the White House since John F. Kennedy in 1960.

And Obama scored an Electoral College landslide (349 to 163, with two states still outstanding) that redrew America's political dynamics. He won states that reliably voted Republican in presidential elections, such as Indiana and Virginia, which hadn't supported a Democratic candidate in 44 years. He also tapped Ohio and Florida, both of which were key to President Bush's victories.

"Indeed, Obama's election arguably represents the most dramatic break from the status quo ever in presidential politics," said CBSNews.com senior political editor Vaughn Ververs. "The first black president, one with a less-than-familiar name, is in so many ways a complete repudiation of everything about the presidency of George W. Bush."

Naming the staggering list of problems he inherits in his decisive defeat of Republican John McCain - two wars and "the worst financial crisis in a century," among them - Obama sought to restrain the soaring expectations of his supporters late Tuesday night, even as he stoked them with impassioned calls for national unity and partisan healing.

"We may not get there in one year or even in one term," he said. "But, America, I have never been more hopeful than I am tonight that we will get there. I promise you, we as a people will get there."

Helping him to get there will be a strengthened Democratic majority in both houses of Congress. When Obama becomes the president on Jan. 20, with Biden as his vice president, Democrats will control both the White House and Congress for the first time since 1994.

Dee Dee Myers, a White House press secretary under President Bill Clinton, told Early Show anchor Harry Smith that Obama should make appointments to demonstrate he is moving ahead to signal "that you have a handle on these problems."

"It wouldn't hurt him, in the next few days, to be surrounded by some of his economic advisers, the people who got him here, like (billionaire) Warren Buffett, Bob Rubin, the former treasury secretary, Paul Volcker, former chairman of the Fed - people who are very reassuring in the eyes of the American people and helped to get Barack Obama here," she said. "But I think he needs to show that the competence that got this candidate to the White House is going to be the rule of the day as they go forward, and that he's moving quickly."

Obama appears likely to draw several of his top aides (including some Cabinet secretaries) from three key sources: Democratic governors midway through their second and final terms in office; former top appointees of Bill Clinton's administration; and political pros from Obama's hometown of Chicago.

People close to Obama believe he would offer jobs to some or all of a quartet of Democratic governors who campaigned hard for him, even if a couple of them opposed him initially.

Two who have thrived in Republican-leaning states - Gov. Janet Napolitano of Arizona and Gov. Kathleen Sebelius of Kansas - backed Obama from the start. Napolitano is seen as a possible attorney general. Sebelius is mentioned as a possible secretary of Education, Commerce, Energy or Health and Human Services.

Gov. Ed Rendell of Pennsylvania is seen as a possible pick for the top Energy or Transportation posts. Gov. Bill Richardson of New Mexico, who sought the presidential nomination himself, is thought to be on a short list for secretary of state.

The four would have to give up the last two years of their eight-year terms as governor, something that might give them pause.

Former Democratic governors who might become Obama appointees include Tom Vilsack of Iowa, mentioned as a possible Agriculture secretary.

Obama already has turned to a former Clinton aide, John Podesta, to head his transition planning.

Top Obama campaign aides David Axelrod and David Plouffe of Chicago would be probable picks for senior adviser or political posts. Campaign aide Robert Gibbs has the inside track to be press secretary.

Other Chicago associates likely to land posts in an Obama administration include lawyer and fundraiser Penny Pritzker and business executive and family friend Valerie Jarrett. Also deemed certain to have a prominent role, if he wants one: Former Senate Majority leader Tom Daschle of South Dakota.

One major task facing Obama, writes CBS News legal analyst Andrew Cohen, is to pick an Attorney General who will continue to rebuild the Justice Department "in the wake of Alberto Gonzales' disastrous reign."

"The candidate must restore professionalism and nonpartisanship within the Department and also continue to adapt to the evolving legal war on terror," writes Cohen.