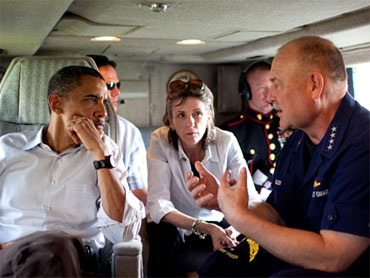 After BP's announcement that its "top kill" procedure, the risky method of plugging its blown-out well at the bottom of the Gulf of Mexico with mud and cement, had failed, President Obama released a statement Saturday night calling the failure "as enraging as it is heartbreaking."

Mr. Obama also said that BP's next plan to try and stop the leak gushing millions of gallons of oil into the Gulf "will be difficult and will take several days." Doug Suttles, BP's chief operating officer, told reporters earlier Saturday that the plan, which would try to cap the site of the leak rather than plugging it, would take between four and seven days.

Below is Mr. Obama's entire statement as provided by the White House:

Today, I've spoken with National Incident Commander Admiral Thad Allen, as well as Energy Secretary Steven Chu, Interior Secretary Ken Salazar, EPA Administrator Lisa Jackson, and senior White House advisors John Brennan and Carol Browner regarding the ongoing efforts to stop the BP oil spill. From the beginning, our concern has been that the surest way to stop the flow of oil - the drilling of relief wells - would take several months to complete. So engineers and experts have explored a variety of alternatives to stop the leak now. They had hoped that the top kill approach attempted this week would halt the flow of oil and gas currently escaping from the seafloor. But while we initially received optimistic reports about the procedure, it is now clear that it has not worked. Rear Admiral Mary Landry today directed BP to launch a new procedure whereby the riser pipe will be cut and a containment structure fitted over the leak.

This approach is not without risk and has never been attempted before at this depth. That is why it was not activated until other methods had been exhausted. It will be difficult and will take several days. It is also important to note that while we were hopeful that the top kill would succeed, we were also mindful that there was a significant chance it would not. And we will continue to pursue any and all responsible means of stopping this leak until the completion of the two relief wells currently being drilled.

As I said yesterday, every day that this leak continues is an assault on the people of the Gulf Coast region, their livelihoods, and the natural bounty that belongs to all of us. It is as enraging as it is heartbreaking, and we will not relent until this leak is contained, until the waters and shores are cleaned up, and until the people unjustly victimized by this manmade disaster are made whole.

Obama to Gulf Residents: "We're In This Together"