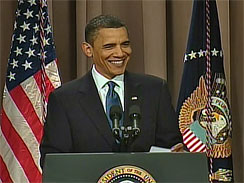 Speaking just two miles from Wall Street, President Barack Obama chided the financial leaders for a "failure of responsibility" even as he sought their help for "updated, commonsense" regulations to head off any new financial crisis.

"Ultimately there is no dividing line between Main Street and Wall Street. We rise or we fall together as one nation. So I urge you to join me," Mr. Obama said in a high-stakes speech near the nation's financial hub.

The president acknowledged differences of opinion over how to best protect bailout-weary taxpayers but denounced criticism from some Republicans who claim a Democratic-sponsored bill headed for Senate action would encourage rather than discourage future bailouts of huge banks.

"That may make for a good sound bite, but it's not factually accurate," Mr. Obama said. He said the overhaul legislation would "put a stop to taxpayer-funded bailouts."

In an "I told you so" moment, Mr. Obama said he warned of the financial turmoil facing the country without dramatic financial industry reforms.

Mr. Obama's speech came at a delicate time in negotiations over the Senate measure, which could be debated next week. The House has passed its own version of financial overhaul legislation. Mr. Obama did not say which one he favored but told an audience that included dozens of financial leaders "both bills represent significant improvement on the flawed rules we have in place today."

He portrayed his appearance at the college, in lower Manhattan, as a reprise of a campaign speech he gave at the same location in March 2008 to offer an agenda for financial regulatory reform.

"Since I last spoke here two years ago, our country has been through a terrible trial," he said, pointing to the loss of more than 8 million jobs, the losing of "countless small businesses," trillions of dollars in lost savings and people forced to put off retirement or postpone college.

"I take no satisfaction in noting that my comments have largely been borne out by the events that followed," Mr. Obama said.

Mr. Obama said that today, the economy is recovering in what he called "the fastest turnaround in growth in nearly three decades."

"But we have more work to do. Until this progress is felt not just on Wall Street but Main Street we cannot be satisfied," he added.

Taking his argument for stronger oversight of the financial industry to the city where the economic meltdown began, Mr. Obama said it was "essential that we learn the lessons of this crisis, so we don't doom ourselves to repeat it. And make no mistake, that is exactly what will happen if we allow this moment to pass."

He spoke for about 25 minutes in the college's Great Hall. The crowd response to his words was more polite than enthusiastic.

"To those of you who are in the financial sector let me say: We will not always see eye to eye. We will not always agree," Obama said. "But that does not mean we have to choose between two extremes. We do not have to choose between markets unfettered by even modest protections against crisis, and markets stymied by onerous rules that suppress enterprise and innovation."

His speech was an effort to ramp up pressure on Congress for legislation imposing new financial regulations.

He called on the financial leaders to tone down what he called "furious efforts" by an army of lobbyists to derail or water down the legislation. "I am sure that many of those lobbyists work for some of you," he said.

The speech was given in a hall where Abraham Lincoln in February 1860 spelled out his position on freedom and slavery ahead of the presidential campaign that year. It also came just six days after the Securities and Exchange Commission's fraud case against the huge investment bank Goldman Sachs.

Mr. Obama has denied any White House involvement in the timing of the SEC case, but the charges have emboldened Democrats in their criticism of Republicans who oppose the administration's overhaul proposal - even though measures in the proposal may not have stopped the transactions involved in the Goldman case.

Goldman's CEO, Lloyd Blankfein, was among those in the audience.

The sweeping regulation proposal represents the broadest attempt to overhaul the U.S. financial system since the 1930s, and aims to prevent another crisis. Democrats are preparing to bring the Senate version of the bill up for debate, but solid GOP opposition has complicated the effort. Senate negotiators say they had made progress toward a compromise bill that could command support from both sides.

The legislation would create a mechanism for liquidating large, interconnected financial firms that are so big that their sudden collapse could shake the economy. At the height of the crisis in 2008, the Bush administration and the Federal Reserve provided billions of taxpayer dollars to prop up the giant insurer American International Group Inc., several banks and various financial institutions considered too big to fail. The moves were highly unpopular with voters.

The bills also, for the first time, would impose oversight on the market for derivatives - complicated financial instruments whose value is derived from the value of other investments. The measures also would create a council to detect threats to the broader financial system and establish a consumer protection agency to police consumers' dealings with banks and other financial institutions.

Republicans contend that Democratic plans to create a $50 billion fund, paid for by the industry, to help unwind failing institutions would encourage Wall Street banks to take risks and to expect future bailouts. Democrats say the fund would lead to bankruptcy, not rescue. The administration does not support the fund and would not object to its being removed from the bill.

The Senate Agriculture Committee on Wednesday approved a bill by its chairwoman, Sen. Blanche Lincoln, D-Ark., to limit banks' ability to trade derivatives and to make such transactions more open. Lincoln's proposal is more sweeping than those offered by the Obama administration and the House, but it is expected to become part of the Senate financial overhaul bill.

At the same time, Senate Banking Committee Chairman Chris Dodd, D-Conn., and Sen. Richard Shelby of Alabama, the panel's top Republican, have been trying to negotiate a compromise measure that could win GOP support.

Democrats have accused Senate Republican leader Mitch McConnell of Kentucky of aiding efforts by the financial industry and others to fend off the attempt to impose tighter regulation.

McConnell has raised concerns about the bill. But he also has said the measure can be fixed and he has pushed for the bipartisan talks to continue.

"Both sides have expressed a willingness to make the changes needed to ensure without any doubt that this bill won't put taxpayers on the hook for future bailouts of Wall Street banks," McConnell said.

New York Mayor Michael Bloomberg - who has expressed reservations to the overhaul legislation - was in the audience of approximately 700 financial industry leaders, consumer advocates, presidential advisers, local officials, students, faculty and others for Obama's speech.