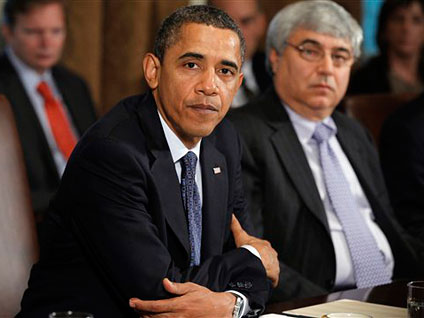 Following the "shellacking" he said he received on Tuesday night in the midterm elections, President Obama is opening up lines of communication with the opposition.

Mr. Obama announced after a Cabinet meeting this morning that he has invited the top Democratic and Republican congressional leaders to the White House for talks on November 18 to discuss the upcoming lame duck session in Congress.

Mr. Obama said he wanted the meeting to be "substantive" and not just a photo opportunity.

"This is going to be a meeting in which I want us to talk substantively about how we can move the American people's agenda forward. It's not just going to be a photo-op," he said. "Hopefully it may spill over into dinner." (No word yet on whether Slurpees will be served.)

Democrats will still have sizeable majorities in the lame duck session because new members of Congress do not take office until early January. Issued expected to be taken up before the new Congress is seated include whether to extend the Bush tax cuts (which expire at the end of the year) and whether to extend unemployment insurance again.

Mr. Obama made a specific call for the Senate to ratify the START treaty he negotiated with Russian President Dimitry Medvedev last spring during the session.

"This is not a traditionally Democratic or Republican issue, but, rather, a issue of American national security," he said. "And I am hopeful that we can get that done before we leave, and send a strong signal to Russia that we are serious about reducing nuclear arsenals, but also send a signal to the world that we're serious about nonproliferation."

The president also said he invited all of the nation's newly-elected governors - Democrats and Republicans - to the White House on December 2 to talk about "nuts-and-bolts stuff."

Mr. Obama also reiterated what he took from Tuesday's elections.

"It's clear that the voters sent a message, which is they want us to focus on the economy and jobs, and moving this country forward," he said. "They're concerned about making sure that taxpayer money is not wasted. And they want a change of tone here in Washington, where the two parties are coming together and focusing on the people's business as opposed to scoring political points."

Obama: People Saw "Overreach" in My Actions
"Slurpee Summit" on Horizon for Obama & Boehner?
Obama's 2010 "Shellacking" is Like Bush's 2006 "Thumping"
Obama: I'll Talk to GOP on Health Care, But...
What's Next for Obama and Congress?