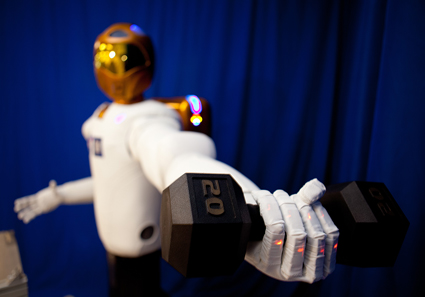 CAPE CANAVERAL, Fla. - The 12 astronauts on the orbiting shuttle-station complex had to explain to a higher authority Thursday why they hadn't yet unpacked R2, the first humanoid robot in space.

In a phone call to the two crews, President Obama congratulated them for their joint mission and made note of shuttle Discovery's final flight.

Then he went straight to the robot matter.

"I understand that you guys have a new crew member, this R2 robot," Obama said from the Oval Office. "Are you guys making him do chores up there? Washing the dishes or something? Or does he have more exciting jobs?"

Discovery's commander, Steven Lindsey, explained that the astronauts had pulled the robot out of the newly installed storage unit but had yet to remove the packing foam around the humanoid.

"He's still in packing foam?" Obama asked with a laugh. "That's a shame, man. Come on guys, unpack the guy. He flew all that way and you guys aren't unpacking him?"

Lindsey said the robot, officially known as Robonaut 2, has been encased in foam for months.

"Every once in a while, we hear kind of some scratching sounds from inside and maybe a 'let me out, let me out.' "

"All right," the president said, "well, let him stretch his legs pretty soon."

Actually, R2 doesn't have legs yet. The robot exists only from the waist up.

After the call, flight director Royce Renfrew said NASA would stick to its plans to keep Robonaut boxed up on the International Space Station until long after Discovery departs with its crew of six.

R2 was designed to be an astronaut helper, taking care of simple, monotonous chores. Its arrival at the space station was delayed four months because of Discovery's prolonged grounding.

On Thursday, NASA managers added a 13th day to Discovery's mission, which already had been stretched earlier in the week to 12.

Lindsey said that the extra two days means Discovery will have spent 365 days in space, over 39 missions, by the time landing day comes around next Wednesday. He said that is "pretty incredible for a vehicle."

"She won't be forgotten for a long, long time, we hope," he told the president.

NASA's oldest shuttle will be retired once it returns to Earth and sent to a museum. The same fate awaits the two other shuttles, Endeavour, due to make its farewell flight in April, and Atlantis, which will close out NASA's 30-year shuttle program this summer.

Endeavour will be commanded by Mark Kelly, the identical twin brother of the space station's commander, Scott Kelly. Mark Kelly is married to Rep. Gabrielle Giffords, who is recovering at a Houston hospital from a gunshot wound to the head.

Before signing off, Obama told Scott Kelly that he spoke to his brother a couple days ago.

"It sounds like Gabby's making incredible progress," the president said, "and we're just thrilled for that."

Noted Scott Kelly: "She's really a true inspiration to all of us."