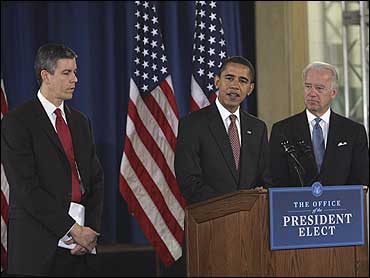 President-elect Barack Obama announced Arne Duncan, the head of the Chicago school system, as education secretary Tuesday and said failing to improve classroom instruction is "morally unacceptable for our children."

"When it comes to school reform, Arne is the most hands-on of hands-on practitioners," Mr. Obama said at a news conference in a school that he said has made remarkable progress under Duncan's leadership.

"He's not beholden to any one ideology, and he's worked tirelessly to improve teacher quality," Mr. Obama said.

Duncan stood nearby, the latest member to be named to the Cabinet of the president-elect. His appointment is subject to Senate confirmation.

"In just seven years, he's boosted elementary test scores here in Chicago from 38 percent of students meeting the standards to 67 percent. The dropout rate has gone down every year he's been in charge."

On a key standardized test, Mr. Obama said, "the gains of Chicago students have been twice as big as those for students in the rest of the state."

A hometown is not the only thing Mr. Obama and Duncan have in common, CBS News' Marc Ambinder notes. The presumed appointee once played his future boss' favorite sport, professional basketball, in Australia.

Duncan would take over a sprawling department that has focused during the Bush administration in winning passage and then implementing the president's signature No Child Left Behind education program.

That effort has proven controversial, with supporters saying it is making progress in improving student skills, while local officials complain it focuses too much attention on standardized tests.

Mr. Obama said it was time for Washington to move beyond "tired debates" such as whether to approve the use of vouchers for students to attend private schools.

"We cannot continue on like this. It is morally unacceptable for our children and economically untenable for America," said the president-elect.

Duncan has run the country's third-biggest school district since 2001, pushing to boost teacher quality and to improve struggling schools and closing those that fail.

The news conference took place at the Dodge Renaissance Academy on Chicago's West Side, a facility that Duncan shut down and then reopened. Mr. Obama and Duncan visited the school together in 2005.

Duncan's nomination will please reform advocates who wanted a big-city schools chief who has sought to hold schools and teachers accountable for student performance; they had backed Duncan or New York's Joel Klein.

These advocates have squared off against teachers' unions in a contentious debate among Democrats over whom Mr. Obama should choose. Unions, an influential segment of the party base, wanted a strong advocate for their members such as Obama adviser Linda Darling-Hammond, a Stanford University education professor.

Yet Duncan's nomination may please the unions, who have said Duncan seems willing to work with them.

"Arne Duncan actually reaches out and tries to do things in a collaborative way," Randi Weingarten, head of the 1.4 million-member American Federation of Teachers, said in an interview earlier this month.

Mr. Obama managed during his campaign to avoid taking sides in the debate, which centers on accountability and the fate of President George W. Bush's No Child Left Behind law. Duncan also has tried to appeal to both factions; he signed competing manifestos from each side earlier this year.

"Arne has been a pragmatic and effective leader of Chicago's schools," the Massachusetts Democrat said in a written statement. "He's brought people together to address difficult challenges and expand opportunities so that every child can succeed."