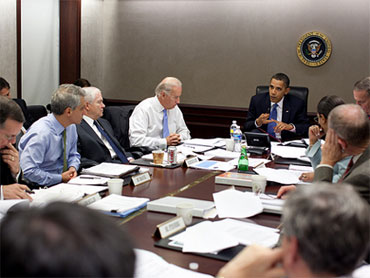 (White House/Pete Souza)
President Obama met Wednesday with his national security team, the latest in his series of meetings on the best way forward in Afghanistan and Pakistan.

This is the eighth in the series of meetings Mr. Obama has had on drafting a new strategy in the turbulent region – a decision that includes how many additional U.S. troops to send to Afghanistan.

Those taking part in today's meeting include the usual members of the war council: Defense Secretary Robert Gates, Secretary of State Hillary Clinton, Chairman of the Joint Chiefs Adm. Mike Mullen, National Security advisor James Jones, and the top U.S. officials in Afghanistan – Gen. Stanley McChrystal and Ambassador Karl Eikenberry, who participate in the meeting by way of a secure video teleconference.

Petraeus said on CNN today that the president is "nearing a decision on this very important topic." He said he thinks the process – though lengthy – has been very productive and very useful.

But a senior White House official tells CBS News an announcement is still a ways off, since Mr. Obama leaves tomorrow on a 9-day trip to Asia and will not announce his decision till after he returns.

Here's a readout on the meeting from the White House:

"The President and his team discussed the length of time that it would take to implement the options he's been presented.

The President believes that we need to make clear to the Afghan government that our commitment is not open ended. After years of substantial investments by the American people, governance in Afghanistan must improve in a reasonable period of time to ensure a successful transition to our Afghan partner.

Resources were discussed at the meeting. Contrary to published reports, the President has not made a decision about the options presented.

(Photo: President Barack Obama meets with his national security team to discuss Afghanistan in the Situation Room of the White House on Nov. 11, 2009.)