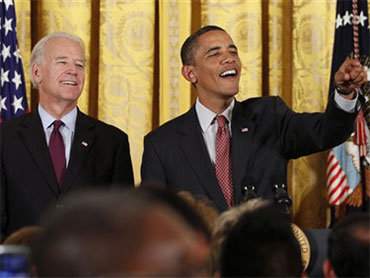 President Barack Obama is chipping away at his long list of promises to gay voters but has yet to win the enthusiastic backing of the reliably Democratic voting bloc.

The Obama White House has accomplished more than any other on gay rights, yet has drawn sharp criticism from an unexpected constituency: the same gay activists who backed the president's election campaign. Instead of the sweeping change gays and lesbians had sought, a piece-by-piece approach has been the administration's favored strategy, drawing neither serious fire from conservatives nor lavish praise from activists.

Obama on Tuesday planned to tick through some of the accomplishments at a meeting with grass-roots gay activists at the White House. His administration planned to announce Wednesday that the Labor Department would order businesses to extend unpaid leave for gay workers to care for newborns or loved ones.

The move, coming less than five months before November's congressional elections, seems likely to incite conservatives and Republicans who stood in lockstep against the Obama administration's earlier efforts to repeal a ban on gays and lesbians serving openly in the military. It also appears likely to be popular with loyal Democrats and organized labor.

Just not with some gay activists, who long ago stopped giving Obama the benefit of a doubt.

"We still need laws passed that achieve what these minimal efforts attempt to do piecemeal," said Lane Hudson, a gay activist who last year interrupted Bill Clinton as he defended his administration's handling of gays and lesbians in the military.

"The little things that the Beltway crowd pays attention to - and the White House uses to say 'We're making so much progress' - that doesn't translate outside the Beltway," Hudson said.

The White House boasts a long list of accomplishments to tout during meetings with gay and lesbian organizations, but their reach is limited.

For instance, Obama signed a hate crimes bill into law, expanded benefits for partners of State Department employees and ended the ban on HIV-positive persons from visiting the United States. He referenced families with "two fathers" in his Father's Day proclamation last week and devoted 38 words of his State of the Union address to repealing "don't ask, don't tell," the ban on gays serving openly in the military.

"There've been some mixed signals from his staff from time to time, but at the end of the day we're on the path toward repeal," said Aubrey Sarvis, the executive director of the Servicemembers Legal Defense Network, which is trying to end the military ban.

"Initially, we saw the president and his team were a bit cautious and measured, I think in large part because they didn't want to repeat the mistakes of the Clinton administration. That was understandable. But we're long past that," he said.

There's reason for the frustration.

"Two wars, a financial crisis, now an oil spill, plus a fundamental unwillingness to act boldly on gay rights, have rendered Obama agenda-less on this issue," said Richard Socarides, who advised Clinton on gay policies.

"Here's the bottom line: We have never been closer to ending this discriminatory policy and I'm going to keep on fighting until that bill is on my desk so I can sign it," said Mr. Obama.

Obama's allies say the small-bore changes are the best activists can hope despite Democrats controlling the White House, the Senate and the House.

"The reason why these policy changes are important is because we do not have ironclad LGBT [lesbian, gay, bisexual and transgender] majorities in either house of Congress," said Fred Sainz, a vice president at the Human Rights Campaign, Washington's largest gay rights organization.

"People wrongly assume that having Democratic majorities in Congress means that your legislative goals will be met. That's not the case," Sainz said.

Gay constituents are hardly the only member of the Democratic bloc to come up disappointed with this White House. Environmental groups groan as a comprehensive climate bill has languished on the Hill. Organized labor saw its signature legislation, which would make it easier for workers to form unions, go nowhere without the White House's backing. And women's groups were in open revolt during the debate over the health care overhaul because of anti-abortion provisions.

"The people in the White House have to realize that issues of equality are not controversial," Hudson said.