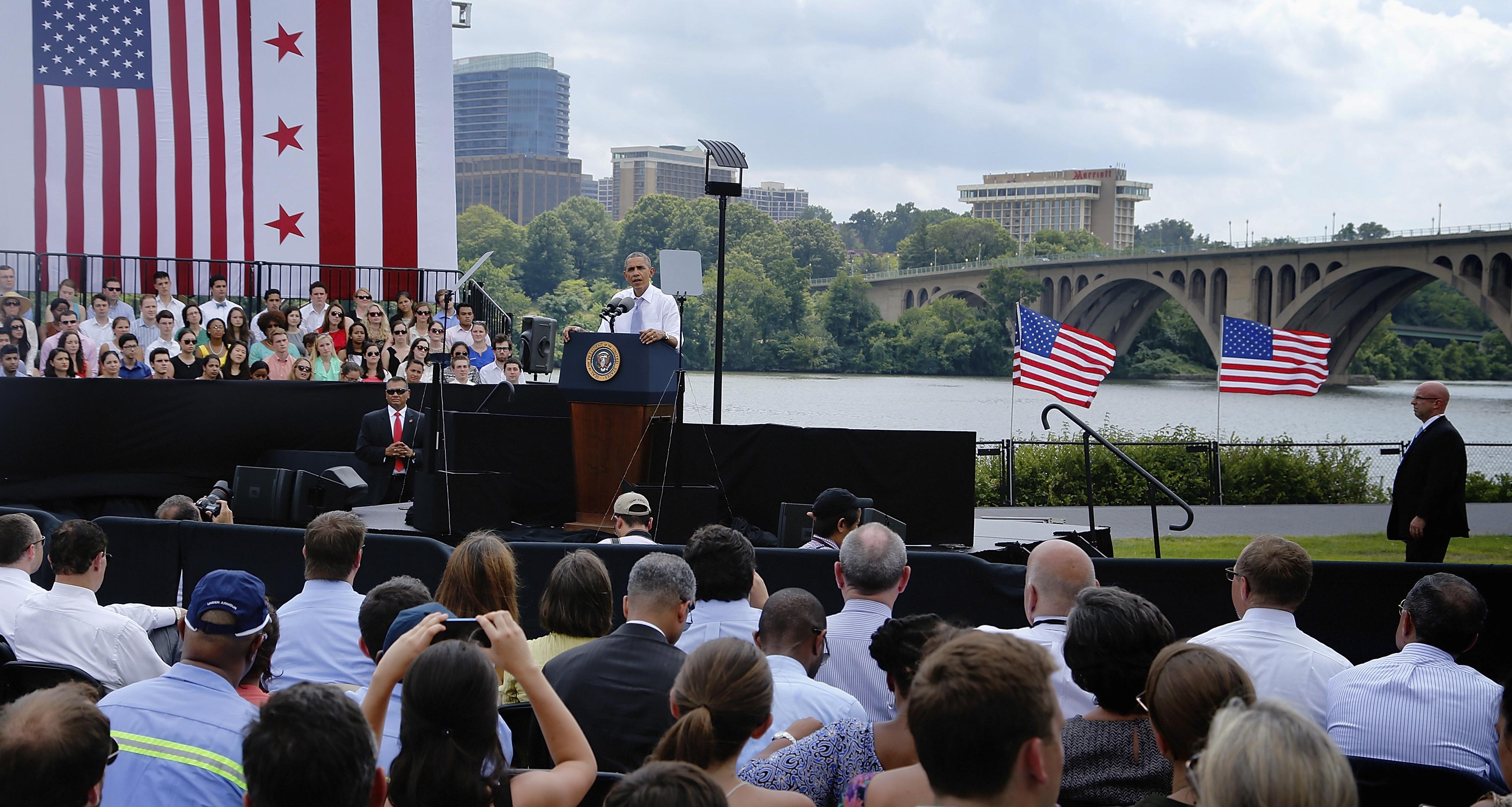 With a potential transportation crisis looming at the end of the summer, President Obama used the backdrop of a bridge that connects Washington, D.C., and Virginia to urge Congress to come up with a solution - and fast.

At the Georgetown Waterfront Park, which looks out onto the Francis Scott Key Bridge, Mr. Obama asked lawmakers to close a tax loophole for companies that send profits overseas in order to fill the coffers of the Highway Trust Fund.

"It's not crazy, its not socialism, its not the imperial presidency. No laws are broken. We're just building roads and bridges like we've been doing for the last, I don't know, 50, 100 years," Mr. Obama said. "But so far House Republicans have refused to act on this idea. I haven't heard a good reason why they haven't acted. Its not like they've been busy with other stuff. No seriously. I mean they're not doing anything. Why don't they do this?"

"Republican obstruction is not just some abstract political stunt. It has real and direct consequences for middle-class families all across the country," the president added.

The Department of Transportation (DOT) predicts that the fund, which has traditionally drawn its revenue from the federal gas tax of 18.4 cents per gallon, will be depleted by late August. As a result, the funding that states get from the federal government for highway projects - about 45 percent - will start to shrink. Transportation Secretary Anthony Foxx warned reporters in May that letting the account expire could lead to 700,000 Americans losing jobs in road work, bridge-building and transit maintenance as 112,000 highway and 5,600 transit projects underway come to a halt.

The gas tax was last increased in 1993, but a combination of inflation and the increasing fuel efficiency of cars driven in the U.S. has slowly eroded the incoming revenues over the years. The Congressional Budget Office (CBO) shows a steadily increasing gap between the amount of money paid out of the fund and what it brings in. Starting in 2015, there will be a shortfall that would grow to more than $80 billion by 2022 if there is no solution.

Foxx outlined a cash management plan for the waning funds Tuesday in a letter to state transportation departments and transit agencies that predicted the shortfall will reach a critical point in just a few weeks. The agency will use a previously-established formula to calculate the percentage of remaining funds that each state will receive, with new revenues coming in every two weeks as money from the gas tax comes into the fund. The plan will state departments of transportation to choose which projects are the highest priorities for receiving federal money.

The administration recently put forward a four-year, $302 billion transportation plan that would be funded in part by the existing gas tax, and in part by vaguely-defined "pro-growth business tax reform." The proposal actually increases both highway and transit funding, and allows states to charge tolls on interstate highways as a way to raise funds.

But with Mr. Obama announcement that the tax reform includes closing an existing loophole for businesses is unlikely to win any Republican support, based on past proposals that have sought to eliminate tax breaks.

A hike in the gas tax has been backed by organizations ranging from the U.S. Chamber of Commerce to the AFL-CIO to AAA, but a tax increase that would affect such a broad swath of Americans is a political nonstarter, especially in an election year. Both the White House and Republican leadership in Congress have ruled that out, although Sens. Chris Murphy, D-Conn., and Bob Corker, R-Tenn., have called for two six-cent hikes in the gas tax in the next two years to refill the Highway Trust Fund with tax cuts as offsets.

Senate Finance Committee Chairman Ron Wyden, D-Ore., has pitched a $9 billion infusion for the fund by raising taxes on heavy trucks and tweaking a few tax rules, and Republicans on the committee are currently developing alternatives. They may come up for consideration when Congress returns next week from its July 4 recess.