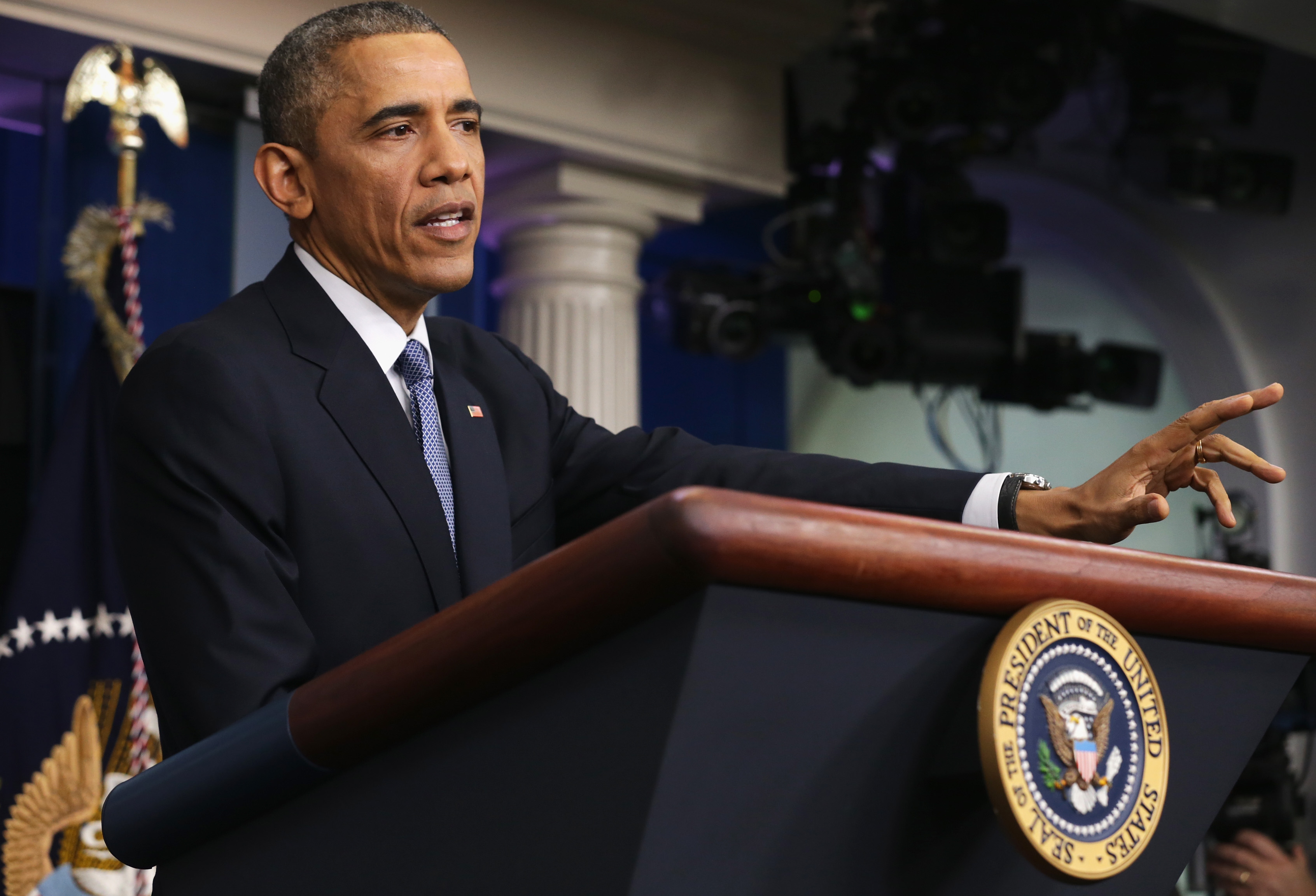 Sony Pictures "made a mistake" when it decided to cancel the theatrical release of "The Interview" in the wake of cyber attacks from North Korea, President Obama said Friday.

"Sony's a corporation, it suffered significant damage, there were threats against its employees --

I am sympathetic to the concerns that they faced," Mr. Obama said in a news conference at the White House. "Having said all that -- yes, I think they made a mistake."

Responding to Sony's decision, Mr. Obama said, "That's not who we are. That's not what America's about."

"We cannot have a society in which some dictator some place can start imposing censorship here in the United States," the president continued. "Because if somebody is able to intimidate folks out of releasing a satirical movie, imagine what they do when they start seeing a documentary they don't like, or news reports they don't like. Or even worse, imagine if producers or distributors and others start engaging in self-censorship because they don't want to offend the sensibilities of someone whose sensibilities probably need to be offended."

While the president said he's sympathetic that Sony is a private company, he said, "I wish they had spoken to me first."

"I would've told them: do not get into a pattern in which you're intimidated by these kinds of criminal attacks."

The company shouldn't have been deterred from releasing its movie, he said, "any more than we stop going to a football game because there might be the possibility of a terrorist attack, any more than Boston didn't run its marathon this year because of the possibility that somebody might try to cause harm."

Sony Pictures released a statement later Friday afternoon, declaring that the company "is and always has been strongly committed to the First Amendment."

"For more than three weeks, despite brutal intrusions into our company and our employees' personal lives, we maintained our focus on one goal: getting the film 'The Interview' released. Free expression should never be suppressed by threats and extortion," the statement said. The decision to cancel the released was made after the majority of the nation's theater owners opted not to screen it.

"Without theaters, we could not release it in the theaters on Christmas Day. We had no choice," the statement said. "After that decision, we immediately began actively surveying alternatives to enable us to release the movie on a different platform. It is still our hope that anyone who wants to see this movie will get the opportunity to do so."

Mr. Obama acknowledged that the cyber attacks "caused a lot of damage."

That said, he added, "It says something interesting about North Korea that they decided to have the state mount an all-out assault on a movie studio because of a satirical movie starring Seth Rogen... and James Franco. I love Seth. And I love James. But the notion that that was a threat to them, I think gives you some sense of the kind of regime we're talking about here."

Asked whether he would take a symbolic gesture like watching the movie himself, Mr. Obama said, "I've got a long list of movies I'm going to be watching. You know, I never release my full movie list."

The president on Friday also took questions on his decision to normalize relations with Cuba, noting that he shares the concerns of some of his critics about the continued human rights violations of the Castro regime.

"As I said when I made the announcement, I don't anticipate overnight changes. But what I know deep in my bones is that if you've done the same thing for 50 years and nothing's changed, you should try something different if you want a different outcome," he said. More communication with the United States, he said, "chips away at this hermetically sealed society."

Asked whether he hopes to visit Cuba, Mr. Obama said, "We're not at a stage here where me visiting Cuba or President Castro coming to the United States is in the cards... I'm a fairly young man, so I imagine that at some point in my life, I will have the opportunity to visit Cuba and enjoy interacting with the Cuban people."

Reporters also asked Mr. Obama about the pending Keystone XL pipeline project, since Senate Republicans next year plan to press the administration to endorse the project. The president stressed that the project will benefit Canadians far more than it would benefit Americans.

"Keystone is not American oil. It is Canadian oil that is drawn out of tar sands in Canada," he said. "That oil currently is being shipped out through rail or trucks, and it would save Canadian oil companies and the Canadian oil industry an enormous amount of money if they could simply pipe it all the way through the United States down to the Gulf. Once that oil gets to the Gulf, it is then entering into the world market, and it would be sold all around the world. So... there is very little impact, nominal impact, on U.S. gas prices -- what the average American consumer cares about -- by having this pipeline come through."