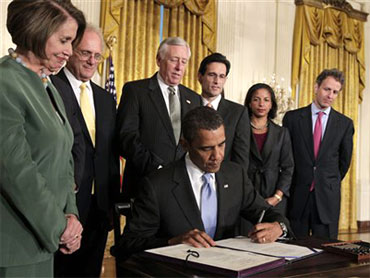 The administration hopes the new unilateral sanctions, combined with ones approved last month in the U.N. Security Council, will yield results even though previous regimens failed to halt Iran's activities that could lead to nuclear weapons development. The U.N. sanctions target the Revolutionary Guard, ballistic missiles and nuclear-related investments.

As lawmakers looked on, Mr. Obama called the new law the "toughest sanctions against Iran ever passed by the United States Congress." But he said he had not sought the outcome, contending it was chosen by an Iranian government which for years has defied U.N. resolutions and forged ahead with its nuclear programs while supporting terrorist groups and suppressing the Iranian people.

While insisting the door to diplomacy remains open, Mr. Obama said, "We are showing the Iranian government that its actions have consequences."

"There should be no doubt: The United States and the international community are determined to prevent Iran from acquiring nuclear weapons," the president said.