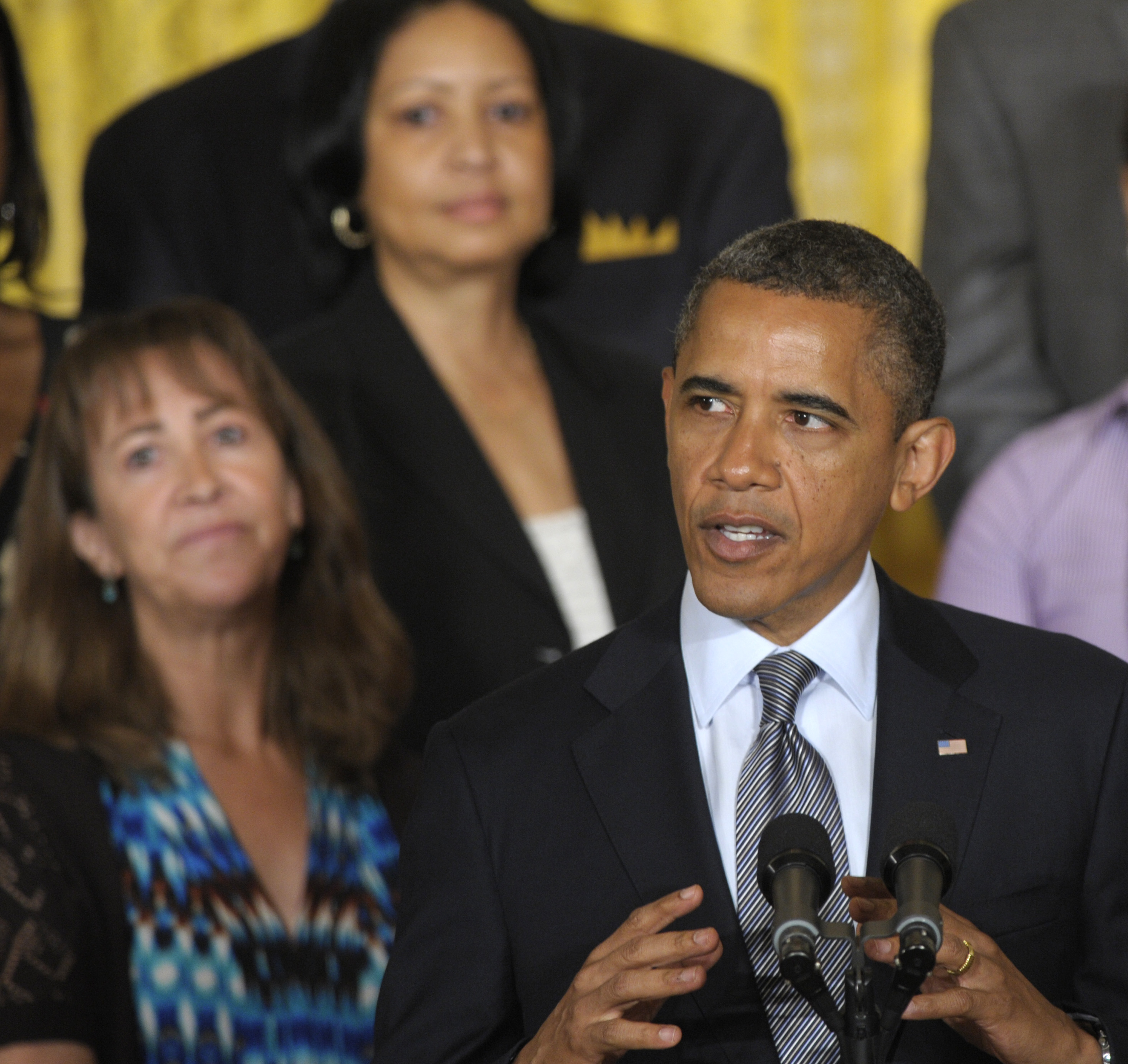 (CBS News) Pivoting from the news of last week's tepid jobs report, President Obama on Monday proposed a one-year extension of Bush-era tax cuts for Americans making less than $250,000, reiterating his calls to let tax cuts for high-earning Americans expire, and reopening a politically contentious debate that is likely to result in a drawn-out congressional battle just months before the November election.

Mr. Obama, speaking from the East Room of the White House, argued that top-down economics favored by many Republicans simply "didn't work," and that "I believe our prosperity has always come from an economy that's built on a strong and growing middle class."

"We don't need more top-down economics. We've tried that theory. That's why I believe it's time to let tax cuts for the wealthiest Americans, folks like myself, to expire," he said.

He stressed that most Americans favor extending the cuts for the middle-class, and that debate over the extending them for the wealthy should not hold up action on the former.

"We all say that we should extend tax cuts for 98 percent of the people...so we should all agree to extend the tax cuts for the middle class," he said. "Let's not hold the vast majority of Americans and our entire economy hostage while we debate the merits of another tax cut for the wealthy... We can have that debate, but let's not hold up working on the thing that we already agree on."

The proposal, which would allow the tax cuts to expire for all those earning more than $250,000, is at odds with a House Republican proposal up for a vote this month, which would extend the tax cuts for all Americans regardless of their income level.

Both Mr. Obama's and the GOP's proposal would have to pass through Congress, however, in order to be enacted -- and both proposals are likely to face fierce opposition from the other side.

White House spokesperson Jay Carney told reporters Monday afternoon that even if a version of the bill extending tax cuts for the wealthy did pass through Congress, the president would veto it.

"What the president's proposing is therefore a massive tax increase on job creators and on small business," said presumptive Republican presidential nominee Mitt Romney, in a radio interview. "We just saw a terrible jobs report just last week and now to add a higher tax on job creators and on small business is about the worst thing I could imagine to do if you want to create jobs."

Echoing that sentiment in a statement, House Speaker John Boehner blasted Mr. Obama for "doubling down on his quixotic call for the same small businesses tax hikes that have been routinely rejected by the House and Senate" despite June's "weak jobs report."

"How will these small business tax hikes create jobs?" he asked. "Even Democratic congressional leaders and former President Clinton have turned their back on this proposal."

A handful of congressional Democrats, including House Minority Leader Nancy Pelosi, D-Calif., and New York Democratic Sen. Chuck Schumer, have suggested that the tax cuts should be extended for Americans earning up to $1 million a year. But a Democratic aide dismissed the notion that some Democrats are at odds with the president's plan.

"Give me a break. We've had 250k in our budget. GOP said no. We offered a million and GOP said no," the aide told CBS News. "Point it is we support extension of [middle class tax cuts] and GOP doesn't."

Senate Majority Leader Harry Reid, D-Nev., who was among the Democrats to support the million dollar cap, also affirmed his support in a Monday statement.

"I agree with President Obama that we should extend tax cuts for all American families up to the first $250,000 of income immediately," Reid said. "Democrats and Republicans should be able to agree that protecting the middle class is the most important priority, so Republicans should stop holding these middle-class tax cuts hostage to extract more reckless giveaways for millionaires and billionaires."

Mr. Obama has long called for a rollback of the controversial Bush-era tax cuts, and in 2008 campaigned on a promise to end the cuts for "the wealthiest Americans" while upholding them for those earning $200,000 or less. In December 2010, however, citing a lame duck congressional stalemate, the president agreed to extend the cuts for all taxpayers. The cuts expire at the end of 2012, and Mr. Obama has repeatedly said that he will not re-up them for America's highest earners.

Economists are divided on the impact of ending some of the tax cuts on America's prospects for economic growth, but Lawrence Summers, who led the White House National Economic Council in early years of the Obama administration, said last month that Congress should temporarily extend the tax cuts set to expire at the end of the year.

"We've got to make sure that we keep providing energy to the economy. In the areas where we have done that, like manufacturing, with the support for the automobile industry, we haven't had great results, but we have had much better results," Summers said.

Former president Bill Clinton made similar remarks, although he later clarified that he only believes the tax cuts should be extended for middle-class Americans.

Andrea Saul, a campaign spokesperson for Romney, pointed to Mr. Obama's proposal as evidence that "the President doesn't have a clue how to get America working again and help the middle class."

Senate Minority leader Mitch McConnell, R-Ky., meanwhile, accused the president of making a "a political calculus, not an economic one," in proposing the tax cut.

Republican strategist Trey Hardin contends that the president's proposal, while strategically timed, merely represents "the beginning of a number of salvos that you're going to see from both parties that's aimed at trying to score political points and put the other side in an uncomfortable position leading up to the election."

"I think that this proposal is a step to start drawing some lines in the sand," Hardin told CBS News. "This starts to frame the debate that we'll see over the next couple of months. Both Obama and Romney have this burden explaining to voters what their plan is to get the economy back on track and to get people feeling good about things in this country again."

For Obama, it also presents an opportunity to paint Republicans as unwilling to compromise and beholden to America's wealthiest citizens.

"The majority of Americans want to extend the tax cuts for the middle-class and do think the wealthy ought to pay their fair share," said Democratic strategist Mark Mellman. "This is an issue on which most Americans agree."

"The question for Republicans is, are they going to hold these tax cuts for the middle-class hostage to tax cuts for the wealthiest Americans?" he added. "My guess is they're hostage-takers, and they will."

Whether or not Mr. Obama's proposal gains traction in Congress before the end of the current session -- and both Hardin and Mellman were skeptical that it would -- Hardin says that coming forth with the proposal nevertheless gives the president a chance to frame the debate, and to contrast his position on the issue as compared to his opponent's.

For Romney, he argues, that means proposing a specific vision for fixing the economy.

"I think for Romney it just can't be about being a referendum on Obama," he said. "Solely running on an anti-Obama referendum is not enough. I think there's too many independent voters out there who are paying closer attention than they ever have. And they want details. This isn't a popularity contest anymore."