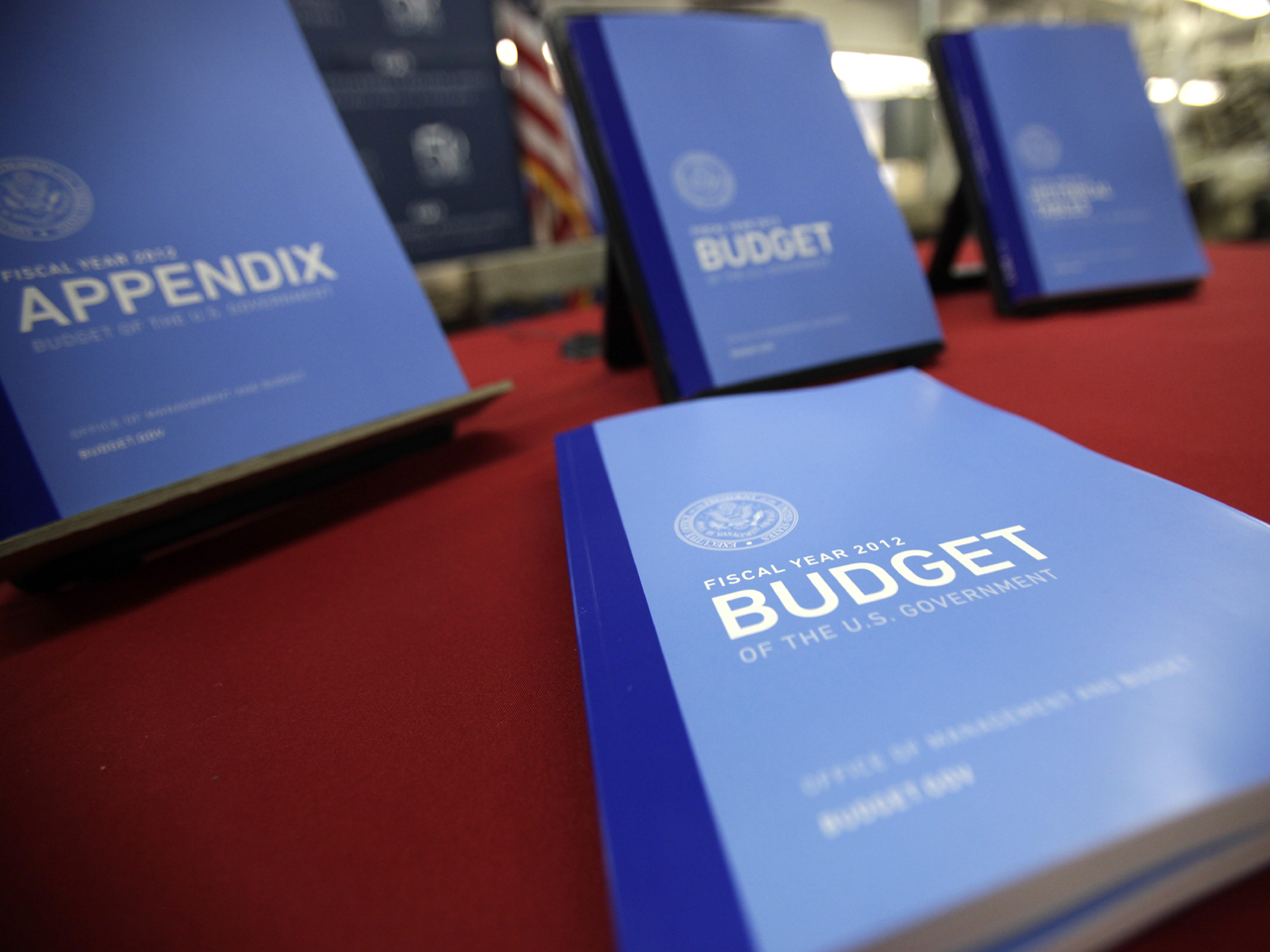 WASHINGTON - President Barack Obama sent Congress a $3.73 trillion budget Monday that holds out the prospect of eventually bringing deficits under control through spending cuts and tax increases. But the fiscal blueprint largely ignores his own deficit commission's view that the nation is imperiled unless huge entitlement programs like Social Security and Medicare are slashed.

Mr. Obama called his new budget one of "tough choices and sacrifices," but most of those cuts would be held off until after the next presidential election.

Overall, Mr. Obama proposed trimming the deficits by $1.1 trillion over a decade. The administration is projecting that the deficit will hit an all-time high of $1.65 trillion this year and then drop sharply to $1.1 trillion in 2012, with an expected improvement in the economy and as reductions in Social Security withholding and business taxes expire.

MoneyWatch: What the Budget Proposals Mean for You

Mr. Obama's 2012 budget would actually add $8 billion to the projected deficit for that year because the bulk of the savings he would achieve through a freeze in many domestic programs would be devoted to increased spending in areas Mr. Obama considers priorities, such as education, clean energy and high-speed rail.

"We have more work to do to live up to our promise by repairing the damage this brutal recession has inflicted on our people," Mr. Obama said.

The president went to a middle school outside of Baltimore to highlight the education initiatives in his budget and told the crowd, "We can't sacrifice our future."

Republicans, who took control of the House in the November elections and picked up seats in the Senate in part because of voter anger over the soaring deficits, called Mr. Obama's efforts too timid. Lawmakers are set to begin debating on Tuesday $61 billion in cuts for the remaining seven months of fiscal 2011.

"Presidents are elected to lead and address big challenges," said Republican House Budget Committee Chairman Paul Ryan of Wisconsin. "The big challenge facing our economy today and our country tomorrow is the debt crisis. He's making it worse, not better."

Senate Republican Leader Mitch McConnell said the president's investment plans missed the simple point that "we don't have the money" to finance Obama's vision of "trains and windmills" in the future.

"After two years of failed stimulus programs and Democrats in Washington competing to outspend each other, we just can't afford to do all the things the administration wants," McConnell said.

CBS News producer Robert Hendin reports, however, that some Republican lawmakers are learning the hard way that it's far easier to talk spending cuts than it is to actually make them, and some in the GOP are coming out against the cuts so vehemently espoused by their fellow Republicans.

"The reason no one in Washington is really surprised about the opposition to those cuts is because, beneath the rhetoric and the Tea Party cut-at-all-cost mantra is the simple fact that every government program has a parent in Congress, and a constituency," says Hendin. "Government spending doesn't happen in a vacuum, it affects real people, and real members of Congress like to be able to take care of their constituents, and get credit for doing so."

Even some Democrats complained that Obama needed a more vigorous attack on future budget deficits.

"We need a much more robust package of deficit and debt reduction over the medium- and long-term. It is not enough to focus primarily on cutting the non-security discretionary part of the budget," said Senate Budget Committee Chairman Kent Conrad, D-N.D., who called for a budget presentation matching the ambition of Obama's deficit commission.

White House Budget Director: "This Budget Has a Lot of Pain"

Mr. Obama's deficit commission made a host of painful recommendations including raising the Social Security retirement age and curbing benefit increases, eliminating or sharply scaling back popular tax breaks, reforming a financially unsound Medicare program and almost doubling the federal tax on gasoline. Obama included none of these proposals in his new budget. The deficit panel called for savings by making these politically tough choices of $4 trillion over a decade, four-times the savings that Obama is projecting.

The Obama budget plan, which is certain to be changed by Congress, would spend $3.73 trillion in the 2012 budget year, which begins Oct. 1, a reduction of 2.4 percent from what Mr. Obama projects will be spent in the current budget year.

Of the $1.1 trillion in deficit savings that Mr. Obama is projecting over the next 10 years, two-thirds would come from spending cuts, including $400 billion in savings from a five-year freeze on domestic programs that account for one-tenth of the budget. The other one-third of deficit savings would come from tax increases such as limiting the tax deductions taken by high income taxpayers, a proposal that Obama put forward last year only to have it rejected by Congress. Mr. Obama also proposes raising taxes on energy companies.

The president's projected $1.65 trillion deficit for the current year would be the highest dollar amount ever, surpassing the $1.41 trillion deficit hit in 2009. It would also represent 10.8 percent of the total economy, the highest level since the deficit stood at 21.5 percent of gross domestic product in 1945, reflecting heavy borrowing to fight World War II.

The president's 2012 budget projects that the deficits will total $7.21 trillion over the next decade with the imbalances never falling below $607 billion. Even then that would exceed the deficit record before Mr. Obama took office of $458.6 billion in 2008, President George W. Bush's last year in office.

Administration officials project that the deficits will be trimmed to 3.2 percent of GDP by 2015 — one-third of the projected 2011 imbalance and a level they said would not harm the economy.

However, to achieve the lower deficits required the administration to assume the costs of the wars in Iraq and Afghanistan would plummet to $50 billion annually after 2012. The budget also fails to pay for the cost of keeping Medicare payments for doctors from being cut after 2013. Mr. Obama's budget also makes assumptions about economic growth that are more optimistic that those offered by many private economists.

While cutting many programs, the new budget does propose spending increases in selected areas of education, biomedical research, energy efficiency, high-speed rail and other areas that Mr. Obama judged to be important to the country's future competitiveness in a global economy.

In the energy area, the budget would support Mr. Obama's goal of putting 1 million electric vehicles on the road by 2015 and doubling the nation's share of electricity from clean energy sources by 2035.

The budget proposes program terminations or spending reductions for more than 200 programs at an estimated savings of $33 billion in 2012. Programs targeted for large cuts included Community Development Block Grants, trimmed by $300 million. A program that helps pay heating bills for low-income families would be cut in half for a savings of $2.5 billion. Another program supporting environmental restoration of the Great Lakes would be reduced by one-fourth for $125 million in savings.

The biggest tax hike would come from a proposal to trim the deductions the wealthiest Americans can claim for charitable contributions, mortgage interest and state and local tax payments. The administration proposed this tax hike last year but it was a nonstarter in Congress.

While Mr. Obama's budget avoided painful choices in entitlement programs, it did call for $78 billion in reductions to Pentagon spending over five years. That would be achieved by trimming what it views as unnecessary weapons programs such as the C-17 aircraft, the alternative engine for the Joint Strike Fighter aircraft and the Marine expeditionary vehicle.

Administration officials said that the savings from limiting tax deductions for high income taxpayers would be used to keep the Alternative Minimum Tax from hitting more middle-class families over the next two years.

The budget proposes $1 billion in cuts in grants for large airports, almost $1 billion in reduced support to states for water treatment plants and other infrastructure programs and savings from consolidating public health programs run by the Centers for Disease Control and various U.S. Forest Service programs.

The administration also proposed saving $100 billion from Pell Grants and other higher education programs over a decade through belt-tightening with the savings used to keep the maximum college financial aid award at $5,550.

The surge in deficits reflect the deep 2007-2009 recession, the worst since the Great Depression, which cut into government tax revenues as millions were thrown out of work and prompted massive government spending to jump-start economic growth and stabilize the banking system.

Republicans point to still-elevated unemployment levels and charge the stimulus programs were a failure. The administration contends the spending was needed to keep the country from falling into an even deeper slump.